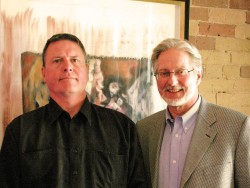 The Capital One BlackCreek Summer Music Festival is presenting a fantastic and diverse series of concerts, featuring stars from the worlds of classical music and opera, jazz, Broadway, gospel, country and mainstream pop. All concerts will be presented at the Rexall Centre at 1 Shoreham Drive on the York University Campus. Given that this facility was designed primarily for staging major tennis competitions, it’s not unreasonable to wonder just what the sound quality will be like for the average concert goer. It was with these questions in mind that I met with John Swallow, of Swallow Acoustic Consultants Ltd. (www.swallowacoustic.ca), and Jamie Howieson, Production and Technical Manager of the Rexall Centre.

John was quick to point out that the round, bowl shape of the venue, as well as its size, is very similar to the classical amphitheatres of Greek and Roman times – some of which are still used today for concerts with great success. The lack of a roof eliminates a major source of acoustic interference: the reflected sound from above which arrives after the direct sound from the stage, degrading the clarity and muddying the sound.

The process of optimizing the concert sound began with a simple test of a sound system set up by Jamie in the basic, untreated arena. Encouraged by what was heard, John went on to perform a full acoustic analysis to identify any specific problem areas requiring treatment. These turned out to be vertical wall surfaces reflecting sound which could be heard as an interfering echo by someone sitting in the house, easily managed with sound absorbing materials so that the only sound perceived by an audience member will be the sound emanating from the stage, free of any interference. The final step was to design the sound system to provide even coverage for every seat in the house.

The stage will be housed in a massive structure located at one end of the playing surface, with its front edge located roughly at the service line of the tennis court. Since the venue was designed to provide uninterrupted sight lines from all seats to the entire playing surface, it follows that every audience member will have an unobstructed view of the performers. Those sitting closest to the stage will be hearing the direct sound from the performers primarily. At greater distances, the sound reinforcement system will come into play so that every seat in the house will experience a comparable volume level so that everyone, wherever they are sitting, will hear clear, evenly balanced sound, that is not unreasonably loud.

The majority of seats are within 45 metres (150 feet) of the front of the stage and the distance to the furthest seat in the top bleachers, is 68 metres (223 feet). These dimensions are comparable with the typical “performer to audience” distances found in a Broadway theatre, so the concert experience is going to be very intimate. John goes on to say, “The idea of intimacy and thousands of people would seem to be at odds with one another … [however] it’s much more intimate than anyone would imagine and that’s because that tennis court surface is actually very small.” This is in a venue that can seat upwards of 12,000 people.

Jamie sums it up: “The combination of a sound design that’s designed for the venue, that isn’t going in and out every day (like every other touring show), is a huge benefit, and when you combine that with an acoustic design that is tailored for the venue – it’s going to give our listeners a seamless event. Close your eyes, no sound system.”

“I’m excited. I’ve been doing this for a long time and I think John and I have come up with a great solution … With a combination of the acoustic design AND the audio design, we’re really confident that this is going to be a great experience for people.”

Information about other concerts in the series can be
found in the pages of The WholeNote magazine as well as online at www.blackcreekfestival.com.

Frank Lockwood is an audio recording engineer and producer, specializing in classical and acoustic music for over twenty years.  In the 90s, he wrote a series of articles for The WholeNote detailing the acoustics of various concert venues throughout the Toronto area. More information can be found online at www.LockwoodARS.com.