Many of us are finding things to do outside of our usual range of work activities, since one thing afforded by the current pandemic for many performing musicians, if not for those in other professions, is time. Zac Pulak, one half of the duo known as SHHH!! Ensemble, has built an igloo. Or rather, as he clarified, his structure is properly referred to as a quinzee, which is built by piling snow and ice blocks into a mound, and then hollowing it out once the exterior hardens into a shell. As any would-be igloo builder needs to know, this is the preferred option when the consistency of the available building material isn’t right for making uniform blocks.

Snow and the pandemic being a source of grief for many of us, it’s heartening to speak with Pulak and his partner Edana Higham about how things are generally positive for this active and upbeat team. Already a couple before forming SHHH!! in 2017, they pair piano (Higham) and percussion (Pulak, playing mainly, but not exclusively, mallet instruments). The name, they explain, conveys a demand for attention – not so much “don’t make noise” but rather “listen to THIS noise!” They are making lots of good noise, and as much as any of us can be nowadays, they’re “all in,” committed to a prospective performance schedule and developing new repertoire for their unusual instrumentation. 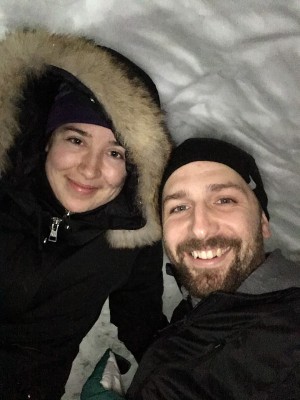 Most performing musicians around these parts will recall the date of Friday, March 13, 2020 as being the last day they were able to perform for the public in an enclosed space. Pulak and Higham had only that week returned from performing their SPIRITS program in Calgary and Edmonton; their next engagement was a concert in an Ottawa long-term care facility. Then they played their last live performance, the last date of the SPIRITS tour that same Friday, when many of us were already learning that live performances were being suspended.

They had postponements too, putting off until fall 2020 performances that had been scheduled for spring. The first was a launch of their concert series NightCAPS with SHHH!! Ensemble, livestreamed on January 30, 2021. The other was part of their SHHHuffle series, recorded at the Church of the Holy Trinity in Toronto in October 2020 for CBC’s In Concert with Paolo Pietropaolo. It aired in early February this year, and of course can still be heard online.

The idea behind SHHHuffle is a good example of how they like to work. It’s a mashup of their various arrangements with new works, some of which they have adopted and many of which they’ve commissioned. The idea, Pulak explained, is to intersperse the unfamiliar and so-called “difficult” pieces with lighter and “easier” fare. They’ve even coined a term for this practice: “Avant-accessible.”

Purists in the new music world, and no doubt there still are some, will perhaps shake their hoary heads at this; Pulak, on the other hand, admits that in fact, the duo may have underestimated how accessible the so-called “difficult” stuff would turn out to be. All credit to their easygoing manner and fine skill, and to the audiences who turned up to listen to them. And to the magic of live connection.

To the drawing board

But the model now requires a different kind of connection, one that must make the best use of electronic media to connect with remote audiences. When asked whether this new model of recorded or livestreamed performance could become the new normal, they won’t come down with an absolute no, but it’s clear they much prefer to be in front of people in a room.

“Certainly it’d be wonderful to go back … to playing for a live audience.” (They help one another finish sentences.) “We founded our duo to bring new music to new people. We love seeing the way people react to some of the programs we put together; we get a lot of joy out of showing someone something new.”

They don’t see the situation as it stands as permanent and perhaps not even as an impediment. “We had built into our schedule a little break, we were going to refresh our repertoire after the tour,” explains Pulak. And while that “little break” is now not so little, they have made hay by continuing to commission new works, and have one or two irons in the fire that will remain cloaked in mystery for now. Stay tuned. They hope to premiere Kelly Marie Murphy’s Double Concerto, provisionally scheduled for the fall of 2021, with the Thunder Bay Symphony.

Furthermore, their outlook has brightened with their recent appointment to a two-year co-artistic director post with Ottawa New Music Creations. If the pandemic is a rutted muddy track for many in the performing arts, SHHH!! seems to be driving an ATV, light and manoeuvrable, with traction that those bogged down in larger vehicles can only envy.

Take the case of larger entities like symphony orchestras, opera and ballet companies, for example. Most have worked hard to maintain a profile online, usually offering partial performances (which cost money, without promise of raising any). They have, to some extent, been afforded a safety net by their donor bases, by government aid and even by insurance agreements. One might go so far as to say the snow falls differently for them. By contrast, smaller groups are making the best go of it by whatever means their personal financial situations allow.

On the other hand, the large companies are forced to confront a reality about house size that doesn’t bear contemplating. When, if ever, are the big halls going to fill again with enough patrons to at least come close to covering the cost of large-scale live productions? Most likely, audiences for larger companies are going to want to come back, but how close together will people be willing to sit, and how much more will they pay if ticket prices rise to compensate for thinner houses?

Chamber players can at least afford to imagine playing in halls where safely spaced audiences will feel comfortable. This is already happening in Europe, if not locally, where there was a smattering of shows before lockdown measures tightened again in January, but everything since has mostly been back online.

It will not stay that way. It’s not just the players who want to play live, it’s the listeners who want to witness live performances. Besides, overhead is low for chamber groups compared to large companies, so while the income from producing smaller events will likely never be huge, it needn’t be nothing either. 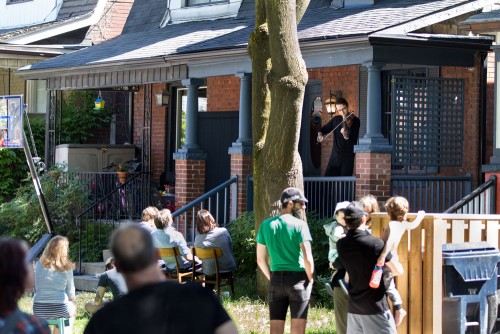 I contacted several player/directors of various small-scale ensembles to talk about this; none displayed any degree of pessimism about the near- or mid-term future.

Rory McLeod and Emily Rho of Pocket Concerts expressed confidence that online product can at least partially replace live performance as a source of income for performers, and as a more satisfactory experience for some audience, are gearing up for summer outdoor concerts this year; at the same time, they are contemplating increasing their reach online in the service of accessibility for audiences who might otherwise be shut out from live performances.

Aaron Schwebel, along with being concertmaster of the National Ballet Orchestra and associate concertmaster for the Canadian Opera Company, also runs Echo Chamber Toronto, a collaborative music and contemporary dance company. He expresses little doubt that live shows will again draw audiences. Schwebel and his colleague Les Allt, principal flute in the National Ballet Orchestra, are two of the founders of LARK Ensemble, a Toronto-based group who run a series at the Corkin Gallery in Toronto. They both talked about their reluctance to use crowdfunding to cover their costs. That form of fundraising draws on a limited potential pool, they say, and therefore is better left for musicians not sheltered, as they are (and I am as well), by service contracts with the larger presenters. 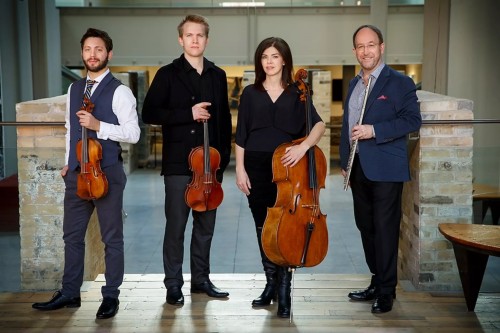 In the longer term, a determining factor will be that electronic media productions, even if offered free, cost money to produce, and that money will need to be recouped eventually by giving concerts to audiences who buy tickets. So far, there’s not much evidence that paywall-protected performances do much besides discourage an already discouraged public. Because it is hard to compensate the listener for the lack of live experience, groups are giving away their online work, in anticipation that their audiences will pay to return when it becomes possible to do so in the flesh.

The days are past when a musician could decide to make a career from recordings only, withdrawing from the live audience à la Glenn Gould. The working model for so many groups is to do what SHHH!! have tried: offer a variety of live performances and use the web for promotion. Once upon a time, a performer would tour to generate record sales, but often nowadays CDs are a marketing tool for performers looking for more live dates. Tech giveth, tech taketh away. 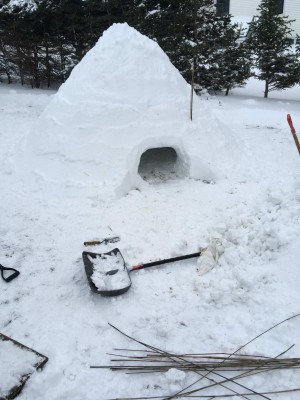 A quinzee is, by definition, temporary, even makeshift. Pulak joked that his mother used to worry, when he was still a kid, that his snow/ice structure would collapse on him (his experience in the craft of building snow structures goes back a ways). All of which makes an untidy metaphor for an arts worker trying to puzzle out what the pandemic means to the music industry. For the time being, big companies have the proper snow to make houses from blocks, but they need a lot of blocks for their large houses. Meanwhile smaller entities, like SHHH!! Ensemble, make the most of it, from the inside out, with what this current storm has dumped on them.

Max Christie is Toronto-based musician and writer. He performs as principal clarinet of the National Ballet Orchestra when restrictions allow, and otherwise spends too much time on Twitter, @chxamaxhc.