From an early age, I was quick to realize that there were not (m)any other young Black pianists who were learning how to play classical music – at least that I had ever met. I was around seven years old at elementary school when I was first introduced to the instrument; at that point I was already able to play some of the choir music and other popular tunes that the school’s music teacher, Mr. Gibson, had taught us. After receiving significant encouragement from Mr. Gibson and others who had heard me play for fun, my parents decided to purchase a piano and enroll me in piano lessons. At the time, none of us had any idea or preference of what style of music I would – or should – learn in these lessons.

Fast forward a couple of decades and nothing has changed, really. No growth of the sport, no catering to a wider audience. So which is the chicken and which the egg? i.e. Is there a lack of interest in classical music within the Black community because it is so underrepresented at the highest levels/”misunderstood music”/etc., or is the lack of representation yet another form of systemic discouragement towards some groups of society?

I was first introduced to classical music in my earliest piano lessons, and have always loved everything the genre has to offer – a seemingly endless expanse of amazing music spanning hundreds of years, providing those who choose to play it a parallel range of technical, musical and ideological challenges. My appreciation fully blossomed after my first classical recital at the Polish Consulate in Toronto, and has never diminished. No matter how many hours of practice, there will always be more work to do and new heights to reach. Delving into the diverse works of J.S. Bach and Domenico Scarlatti could by themselves cost a lifetime of exploration, let alone engaging into the oeuvres of Mozart, Beethoven, Chopin, Liszt, Brahms and beyond. As “musically gifted” as I was told I was when I was young, there were so many other pianists who seemed to be light years ahead of what I thought I could ever achieve. My goal became to improve and become the best version of my musical self that I could be.

While I was committed to my own improvements, and those my piano teachers laid out for me, I was often met with equal confusion, resentment, discouragement, and sometimes straight-up disdain from others around me: I don’t “look” the part of a classical musician, nor do I talk as such (whatever that means). I can also “talk the talk”, as many of my colleagues tend to do seemingly at all times; however, I don’t feel it is necessary to prove my credentials in every discussion. I have also often been told - especially during my time living abroad – to perhaps switch my musical focus to something “more in my lane”, such as jazz music. I have even been stopped from entering a concert venue in which I was the performer until I was able to convince the unidentified individual (thankfully not the concert promoter!) to actually look at the advertising poster to confirm that I should even be allowed inside the building. In another instance I was questioned, while at a music store looking for recordings of pieces I was intending to prepare and perform, as to whether the music I sought was actually for me. Once I stated that I, too, am a classically trained musician, the look of shock was followed by the comment, “Wow, you definitely can’t judge a book by its cover!”

The amount of restraint it took to not lose my temper in that moment took every fibre of my being. I remember discussing the situation with my father shortly afterwards, and was even more disheartened to hear his sincere, yet candidly matter-of-fact response: “Well, son, get used to it.” Unfortunately, he was 100 percent correct. 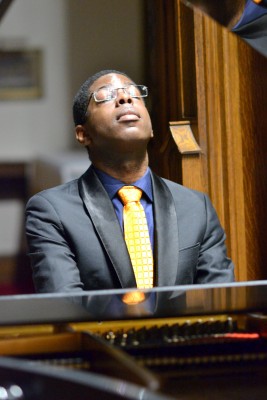 During all of my academic years, from elementary school through university, I did not encounter a single other Black pianist: not only in my own schools, but also in competitions, professional performances, piano masterclasses, or any other musical environment. It was not something I dwelt on at the time. I was so preoccupied with building my own career and completing my education that I didn’t have the time to be as cognizant as I probably should have been. I only tended to notice the imbalance when people would bring it up to me in conversation as they were meeting me for the first time at my own performances.

Once the proverbial light bulb finally went off in my head, I realized the stakes were going to be much higher than simply accomplishing great feats at the instrument and making a name for myself. I also came to understand and appreciate that I represented a community within an already marginalized community: a Black classical musician (see: unicorn) immersed in a fraternity already pigeon-holed as being on the fringes of mainstream. Not only was it – and still is – of paramount importance to be at my best on stage, but it was imperative to remain aware that the lights, camera and attention would not necessarily stop for me just because the performance was over.

I do not care to theorize whether, or how, my ethnicity impacts my career opportunities. Not only would viewing all of my experiences through this coloured lens prove to be exhausting, but it would also be disingenuous to accuse others of racial bias in every instance. That being said, there is no doubt these systemic racial disparities continue to exist – as evidenced by the significant lack of diversity throughout academic and practical classical institutions. It is exceptionally difficult to prove such theories, and one cannot accuse others of these biases directly without being labelled as confrontational, potentially jeopardizing future opportunities. I instead use these inherent challenges as a means to overcome. I believe that quality will always succeed. So as long as I continue to prepare well, push myself to be a better musician tomorrow than I am today, maintain a respectful attitude, and appreciate the incredible support from everyone around me and those who have contributed to my career, the rest will take care of itself.

I make no secret – diving even deeper into the seemingly infinite pool of classical music, travelling the world, seeing new places, meeting new people, performing, recording albums: these are among the many things that continue to fuel my passion for making music. If part of the job description involves being an ambassador of sorts, I fully welcome the opportunity every time, especially if it has the potential to encourage more young Black individuals to explore a world they may not otherwise know exists, or feel entirely comfortable stepping into at first. It is a wonderful feeling to do what you love, regardless of perception as the next classical unicorn – more important is to focus on being the next wonderful musician and human being.

The same sentiments hold true in between performances as well. As an independent artist, I have continued to focus the majority of my waking hours on building the practical component of my career – concerts and international travel to destinations around the world to share my music with others. Simultaneously, though, I have focused on teaching as well – working with students of all ages and abilities – first in Europe, and now in Canada. And here we come back to the question of the chicken and egg again.

It has been a longstanding dream of mine (again, no major revelation) to achieve a position within a higher-education institution such as a college or university – working with students who possess the highest level of talent, passion, and dedication to their art the way I also did. It’s incredible, though, how many positions like these continue to be filled with faces and backgrounds which look remarkably the same. How many institutions in this vast expanse of the Great White North employ any teachers/professors/music educators who look anywhere similar to me? How long will this trend continue? Even as recently as a month or so ago, I applied for an associate professorship, at a university not far from where I live, where not only did I meet the qualifications outlined in the job post, but I anticipated that my educational background on multiple continents (in addition to my performance and teaching experience) would have, at very least, warranted a cursory response. Unfortunately, there was not even so much as an acknowledgement to my follow-up, let alone an invitation for a conversation.

Gullible, perhaps, yet ever-optimistic, I await the next opportunity.

My intention in writing this is to share some of my experiences with those who are willing to read about them; maybe in some way we can relate. Side by side in melody and harmony, let us continue to learn from each other. Our shared love of music is the perfect excuse! Music as a universal language, and classical music as my chosen genre, has no inherent gender, no colour, no race. It transcends time and physical boundaries, and has sustained its international outreach for hundreds of years. It uplifts and allows our imaginations to enter a realm of possibilities we can achieve no other way, if we allow it to. In this way we are all connected. So stay healthy and safe and thank you very much for reading.

Award-winning Canadian pianist Luke Welch has performed extensively on the international stage, and his albums have received critical acclaim.  He is currently based in Toronto.