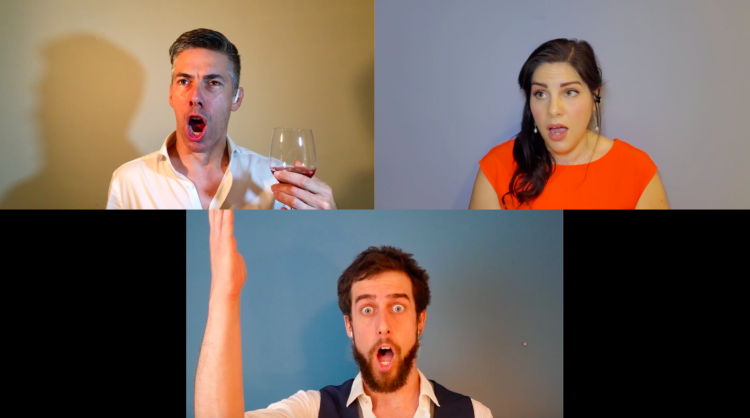 It was a phone call from Hamilton, from Boris Brott, that put me on the trail of this story. Brott is indefatigable: between May 2 and August 13 the Brott Music Festival offered up 18 online productions, none more intriguing than their virtual Don Giovanni which aired, on Facebook, on July 30 and remains available at brottmusic.com. “You should watch it,” Brott said, so I did. Half way through I was hooked and called him back with questions. “You should talk to Anna [Theodosakis],” he said. So I did.

What follows is a highly condensed version of a half-hour telephone chat. 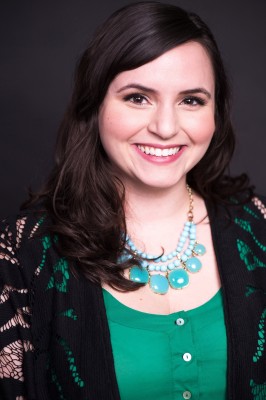 WHOLENOTE: I haven’t finished watching all the way through, life gets in the way when you don’t have to dress up. I have reached the party scene though! A lot of the virtual stuff being generated right now that tries to be a “reasonable facsimile” of live, leaves me cold. What struck me about this is you have made the medium a huge asset.

Anna Theodosakis: Thank you, I am really glad it came across that way. We’re never going to be able to recreate exactly the live experience so I wanted to use the medium of film to my advantage; but in the end actually it’s kind of its own new medium. It’s maybe two parts film but then another part I don’t really know how to describe either. It’s not a movie. Not a music video. It’s its own whole other creature we were discovering as we were doing it.

When did the idea kick in of having it take place right inside the “zoomerverse”? Was there some “aha!” moment? It was really only about three weeks before rehearsals started, that Brott decided we would be going totally online. So there really wasn’t very much time to prepare. I’d like to say there was a big plan but it was really going moment to moment, considering what can we accomplish as we go.

Such as? Such as when we decided it was going to be pretty much impossible to do secco recit [minimally accompanied recitative] remotely. I had already had an interest in the concept of really bringing the women to the forefront – not changing any of the libretto, but in the action of scenes beyond the ones they are usually in. With the recit gone, we had to fill the story gaps, which gave me the opportunity to insert the black and white monologues, which are probably the most cinematic aspect of the piece. They give the female characters a little more agency, as subjective narrators throughout. I thought about writing them myself but decided to ask the singers, as well as their covers, so six women in total, if they would collaborate, in pairs, in writing them. So we would have the clearest differentiation of voices. (And also to be honest I was running out of time on story boards, etcetera!)

And what else? Well, we were rehearsing over Zoom, all together, and then later the singers would record themselves separately. A lot of the visual interaction and intent was inspired by how we were rehearsing and found its way into the story board. So I found myself trying to think how I could use the Zoom squares the singers were in to actually help tell the story. The lower status Leporello looking up to Don Giovanni, or Giovanni looking down on him, for example. Or people placed across diagonals so there is more tension in space.

The directionality is really effective, driven by the characters’ eyes all the time. I’m glad. For me as a director in live theatre, when people look at each is very important to me. Here I’d lost the dimension of depth, which I really use a lot in the theatre, but I gained this new kind of directional access I really like … Also one of handy things about film is you can’t see what’s behind the camera, so post-it notes and little drawings behind the camera meant they knew exactly who was where. “Donna Elvira is up and to your left,” … like that..

So each “home square” is the actor’s own home? It’s their own living space, and the singers were completely in charge of setting up their own cameras and audio recording, with me on Zoom providing advice and making sure the points of focus were there. Their own characters as well as their entire crew! Quite the feat actually.

And equipment compatibility? Brott Opera was prepared to deliver smart phones or cameras to people, but it turned out everyone had at least one iPhone, and in the end everyone had audio quality we could at least work with in the sound editing, although it took some tweaking. If I was doing this again, though, one thing I would love would be for everyone to have more consistent  audio and slightly more consistent lighting and backdrops.

I found the semi-coordinated off-white backgrounds in each square quite fun. Different shades for each character – a really shady shade in the case of your reptilian Don Giovanni!  Yes. In Phillip’s case [Phillip Addis plays Giovanni] he had a couple of lighting sources so we were able to get some shadowy mix in Act 2 as he gets closer and closer to hell. It was nice to have a little extra control over source and brightness levels at that point.

I laughed out loud at the sleight of hand –the common properties, things getting passed or tossed from square to square  bouquets, the plates at the banquet, the hats. How much of this was on the fly? A lot was ideas rising while working through the moments, for sure, but honestly I was also watching YouTube and TikTok videos in preparation. I wasn’t on TikTok before but I knew that people have amazing videos there – simple but magical transitions, links like that. I was definitely most happy with the toss of the bouquet! If I get the chance to do one of these again, I’d choose some full-on comedy or farce: moving people in and out of boxes, creating motion by sudden appearance and disappearance … you could have a lot of fun with that. 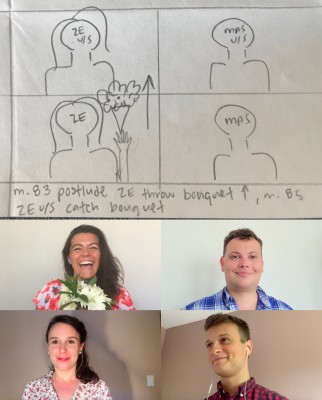 There’s a lot that’s not so funny in Giovanni these days. Zerlina singing to Masetto words to the effect “If it makes you feel any better to beat me up, then go right ahead.” Delivered straight it’s really uncomfortable to watch. Yeah; definitely that’s one among many of the scenes I struggled, as a millennial woman of this time, with how to portray. But I think it might be good that people are left feeling really uncomfortable, because I would rather the audience feel “you didn’t have to do this, I don’t agree with it.” So sometimes I think it’s best not to censor the uncomfortable experiences and have them sit in that. And we do make choices – like at the very end of the aria when she starts singing pace, pace – we kind of change the perspective of where the camera is, so the audience becomes Masetto, because singing to him she is also singing directly towards us. So those are the sorts of things I find interesting as a director.

On a different track, looking at the range of work you’ve done on the opera and art song scene over the years – your own company Muse 9, art song, indie opera, the COC – I was thinking how this particular medium brings the giants down into the same arena as everyone else. You’re completely right about the medium being an equalizer. I was speaking to the head of a university opera program - they don’t have a real theatre, they work in a dressed-up gym – but other schools that do have a dedicated theatre are going to be doing virtual too this year. So it definitely equalizes things.

So what are you going to be carrying away from this? I have always been a stickler for specificity especially with focus and eyeline and intention, so working with singers over film, where even a slight eye glance speaks volumes, is a gift. And these days, at the Met and other places that are filming, it’s now “ok so I’m performing for a massive house but I also have a camera right in my face.” And I personally think there’s a way that, if you’re acting specifically, with detail and with great preparation that you don’t have to change how you act for a large hall versus a small space.

But most of all, it emphasizes for me that what is most important for an audience is relationships. You can have the dragons and the flashiness and spectacle but at the end of the day if the relationships and experiences aren’t clear and important then I don’t think there’s much core to the experience.