With a career spanning half a century, renowned Toronto-based percussionist Bob Becker has garnered a global reputation for his instrumental mastery, interpretive skill and rigourous commitment to his art.

Reading road kill on balding tires
In the 1996 issue of Percussive Notes, veteran marimbist Leigh Howard Stevens summed up the prevailing opinion of Becker: “Everybody who knows anything about xylophone knows you are not only the greatest living xylophonist, but also the greatest xylophonist who has ever lived. Everybody who knows anything about … ‘world percussion’ knows you are a black belt on tabla and African hand drums. Anyone who has heard you perform the Toru Takemitsu From me flows what you call Time with Nexus knows you have a golden touch on steel drums. Anyone who is familiar with your performances with the Steve Reich Ensemble has to admit that you are a hot marimbist and vibe player, and anybody who knows you well, also knows that you are a superb all-around orchestral percussionist and timpanist who can read road kill on balding tires.”

Having established Becker’s percussion street cred, Stevens cheekily continued, “[but] … how are your drum set chops?”

Becker’s equally cheeky reply: “Well, the older I get, the better they used to be.”

While internationally known as a brilliant percussionist, Becker’s two upcoming concerts in Toronto, early in February 2020, showcase his composer and music director chops – sides of his career becoming more prominent in the last two decades.

February 4, the Bob Becker Ensemble presents “Clear Things May Not Be Seen” at the COC Free Concert Series, with the same program on February 6 on the U of T Faculty of Music free Thursdays at Noon Concert Series in Walter Hall. The four Becker compositions in the concerts all feature vocals by soprano Lindsay Kesselman and mezzo-soprano Andrea Ludwig, as well as Becker on percussion, pianist Midori Koga, marimbist and conductor Christopher Norton, percussionist Louis Pino, plus clarinet and string quartet. 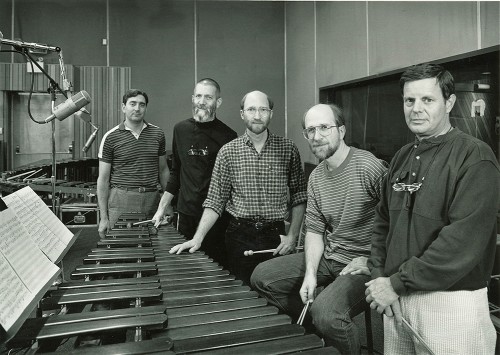 Blending musical cultures
Before touching on those four works, though, I’d like to explore the musical journey Becker has taken to arrive at this point in time. Some of the first compositions of his I heard, Lahara (1977) and Palta (1982), employed an explicitly multicultural approach, cannily morphing elements of Western military-based rudimental drumming with North Indian classical (Hindustani) idioms: tabla drumming and raga. In Hindustani concerts the role of tabla drumming is primarily as a time keeper, though on occasion it transforms into a dialogue between the tabla and the main melodic performer. Becker made use of such tabla playing in his “melodic” writing for the snare drum in Palta, implementing in the music a convincing multicultural music aesthetic. Traces of influences from musical minimalists like Steve Reich, as well as his extensive percussion keyboard work with NEXUS, were also evident stylistic elements.

Becker’s world music education began in earnest at Wesleyan University. He spent four years in its world music program studying with several masters of Javanese, Indian and Ghanaian musics. “Probably the most significant teachers for me at that time were my tabla teacher Sharda Sahai and my African drum teacher Abraham Adzenyah,” noted Becker in Percussive Notes.

As for his 49-year association with NEXUS, Becker once candidly reflected that it “is far more than a musical ensemble of which I happen to be a member. It has been a support group, a forum for composition and experimentation, an educational resource, a financial cushion and an extended family, with all of the joy, sadness, love and craziness that ‘family’ implies.”

The spoken, written and sung word
I asked to meet with Becker at his Toronto home to get a better sense of his music and upcoming concerts. He cordially obliged on the brink of the 2019 Holiday season.

I first asked how he would characterize the (perhaps surprising to some) selection of his songs with instrumental accompaniment his ensemble is presenting in February. “I suppose we could call them chamber songs or vocal chamber music,” he replied. “The poetry which forms the lyrics is important in these works. In fact, my engagement with the written and spoken word in music performance goes back at least to the collaborations NEXUS had with the distinguished Canadian poet Earle Birney (1904 -1995). We did several concerts with him in Toronto, perhaps the first of which was at York University in the early 1970s.

Raga and tala in Becker compositions
Raga is a central concept in Indian music, yet there’s no simple way to describe it in Eurocentric music tradition terms. As I understand it, ragas fall somewhere on the continuum between melody and scale. They can further be characterized as separated by scale, lines of ascent, descent and transilience, emphasized notes and register, modal contour, by intonation and ornamentation.

I asked Becker which of the four works on the February concerts is informed by raga (commonly spelled “raag” in Hindustani music).

“All the works on my February concerts are informed by raag,” Becker stressed. “Mudra (1990) also references Indian music. It was composed for the Toronto choreographer Joan Phillips for her dance work UrbhanaMudra. A 15-minute music suite, Mudra led me to develop the musical language I still use. Over time I’ve found this idea had legs.”

In his article Finding a Voice (in The Cambridge Companion to Percussion, 2016) Becker delineates his idiosyncratic journey incorporating notions of raga into his compositions. “The exquisitely ornamented and melismatic melodic phrases of Indian music,” he wrote, “imply no harmonic direction and hold no cadential tension to be resolved by real or implied triadic progression. … However, my experience was quite different. For someone born and raised in a culture saturated with music based on chord progressions, it is probably inevitable that the mind will supply imagined harmonies when hearing monophonic or heterophonic melodies.” Music On The Moon, commissioned by Esprit Orchestra, is a 1996 Becker chamber orchestra work informed by raag Chandrakauns. “Chandrakauns has five tones per octave,” Becker observed. “By playing around with these tones, I discovered that stacked vertically they create an ambiguous harmonic space. From a Western perspective, I could construct chords with these stacked notes. I was able to derive some surprisingly elaborate structures, including the matrix of four nine-tone scales currently employed in my music, from this conceptual notion.”

Bob Becker Ensemble
Becker has been a veteran member of several prominent Canadian and American percussion-based ensembles. When (and why) did he think to establish his own group?

“In the mid-1990’s I formed an ensemble to exclusively perform my music,” he replied, “taking a page from the Steve Reich Ensemble, of which I’m a longtime member. I learned much from Steve in how to combine the roles of performer and composer. His ensemble works Six Pianos (1973) and Music for 18 Musicians (1976) are seminal examples of that [communal creative] process in action. The rehearsals and compositional process went hand in hand, taking a number of months for the full composition to slowly emerge, section by section.”

Is there ever a tension between Becker’s career as a percussionist and a composer? “I often play in my own works,” he reflected, “for instance, I’m playing vibes in the February concerts, doing double duty. I’ve always wanted to be in the music. On the other hand, for over 20 years I was on the road as a percussionist for more than half the year and I found it difficult to compose on the road. I need to be ‘in the zone,’ in a dedicated space, when composing.” Double career of the percussionist-composer
It seems to me, I observed to Becker, that in the Western world the double career of percussionist-composer is a particularly 20th-century phenomenon. Which notable composers who also played percussion have been Becker influences? “I can think of John Cage, Lou Harrison, Harry Partch and the late Michael Colgrass,” he quickly replied. “Of course we should also add Steve Reich, who not only studied Western percussion but also cited West African and Balinese percussion as early influences. Also significant in this context is that Steve was always interested in using musicians with non-Western and early [Western] music backgrounds.”

“In Finding a Voice I discuss composing for percussion,” Becker added. “I’ve kept writing music in a continuously developing manner, building and developing on previous works consciously, as I saw Steve Reich and Philip Glass doing. In my quest as a composer I learned a lot from them…”

February concerts: the compositions
Cryin’ Time (1994) scored for soprano solo, vibraphone, marimba and piano features lyrics adapted from a poem by Canadian artist Sandra Meigs. It tells the troubling story of a young mother who accidentally drops her baby into a deep river canyon; yet it’s told in an anomalously matter-of-fact narrative style redolent of a hurtin’ country song. “I wanted my music to play even more on this ambiguity, which was the reason for adapting the text (done with the artist’s permission),” writes Becker in his program notes. The eight-minute work closes ominously with an enigmatically dense chord on the piano, while the keyboard percussion supplies low tremolos and arpeggiated figures.

Never in Word (1998) is also scored for soprano, piano and keyboard percussion. Its lyrics are drawn from a short poem by the American author Conrad Aiken (1889-1973), long one of Becker’s favourite poets, one of series of 96 poems under the collective title Time in the Rock (1932, 1953). Aiken begins his poem with a comparison of the merits of music and poetry. Becker’s vocal melody moves between cantabile lines and disjunct leaps, the instruments effectively echoing, underpinning and contesting it.

The remaining two songs on the February program represent Becker’s most recent work. To Immortal Bloom (2017) is for soprano, vibraphone, piano and cello, with lyrics also derived from Aiken, here poem XXI of Preludes for Memnon (1931). “The obvious musical and numerical references, as well as a feeling of reverie in the concluding imagery, were the inspiration for the musical setting,” writes Becker.

Clear Things May Not Be Seen (2018) ups the vocal and instrumental ante. Scored for two soprano soloists plus string quartet, clarinet, bass clarinet, marimba and vibraphone, the song’s lyrics once more borrow from Aiken’s epic cycle Time in the Rock – this time from three different poems. At 13 minutes it also clocks in nearly twice as long as To Immortal Bloom, reflecting Becker’s expanding compositional ambitions.

Becker has thought long and deep about what it means to be both a composer and performing musician today. “… Am I a percussionist-composer or a composer-percussionist?” he asks in Finding a Voice. “Although I still may be in transition from the former, the principles and rules I need to function as the latter are firmly in place in my work,” begins his answer, concluding with, “If percussionists recognize me to be a composer, and composers consider me to be a percussionist, perhaps that is the best of both worlds.