When Toronto percussionist and composer, Kristofer Maddigan, was first approached by his friends back in 2013 to write the music for the video game they were developing, his first reaction was “no way.” Actually his second and third reactions were the same. He felt far out of his comfort zone. As a classically trained percussionist and someone without a lot of composition experience, he felt he just didn’t have the writing chops. But the brothers, Chad and Jared Moldenhauer, persisted.

“I think I was the only musician that they knew!” says Maddigan.

That turned out to be a very fortunate thing as – fast forward five years – the video game Cuphead is a huge hit worldwide, selling over three million copies within the first year of its release and garnering all kinds of accolades, including best game of 2017 by Entertainment Weekly, a BAFTA for Best Game Music and an Academy of Arts and Sciences D.I.C.E. award for Outstanding Achievement in Original Music. One of the charms of the game is its artwork, which was inspired by cartoons and animation of the 1930s.

The music has been really well-received too. Maddigan was nominated for a JUNO award for best instrumental album this year (a 4-LP deluxe vinyl set) and at one point the album reached No. 3 on Billboard’s jazz charts. Maddigan was also named “2017 Musician of the Year” by the Toronto Musician’s Association.

One of the behind-the-scenes videos of the recording session for the soundtrack has gotten over 3.2 million views on YouTube, which is pretty much unheard of for modern big band music. As well, a live outdoor show of the band playing the score at the recent Kensington Market Jazz Festival was sold out to a very enthusiastic audience.

Here, Maddigan gives us some interesting insight into the process for devising a game soundtrack.

WN: So how did you get the gig?

KM: I met the brothers Moldenhauer around Grade 5 and have been friends with them ever since. We grew up about two blocks from each other in Regina and I spent countless hours in their basement playing video games growing up. (I probably should have been practising.) Six or seven years ago when they had the idea for this little video game they wanted to make, they asked me if I was interested in writing the music.

Like many youngsters I started on piano, but also like many youngsters I found I didn’t have the patience for it. I wanted to be a rock drummer, so my mom and I compromised and I began taking classical percussion lessons when I was around ten. I continued playing percussion throughout high school and fortunately still ended up playing lots of rock drums, which was a great balance.

While taking a year of general courses at the University of Regina I came across a poster for a U of R percussion ensemble concert and I said to myself, “Hey, I used to do that.”’ So I checked it out, and it reawakened a love of music that had been dormant for a few years. That fall I started my undergrad in percussion performance, and then moved to Toronto 11 years ago to do an Artist’s Diploma at the Glenn Gould School. I’m very fortunate to have been a member of the National Ballet of Canada Orchestra since 2010.

Was this your first major composition?

Essentially the only other compositions I have done are a tune from my recital from my brief stint in the U of T jazz program and some processed marimba background music for a Nuit Blanche project. That’s pretty much it. I do have many other musical interests though. For the past four years I have been really into Brazilian percussion, and I’m always working on my drum set playing. I’m also trying to expand my composing experience and am currently digging deeper into theory and counterpoint. 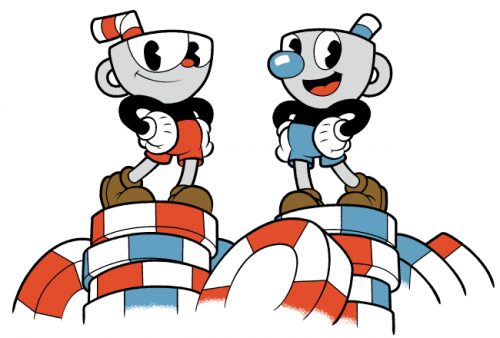 Tell us about the process for composing for a game. Were there style guidelines? Were there precise timings to adhere to? How long did it take? What was the most challenging part?

The game development and the composition process took place pretty much simultaneously. I was sent a list of levels and bosses that would require music. [Editor’s note: In video gaming, a boss is a significant computer-controlled enemy. A fight with a boss character is referred to as a boss battle and Cuphead has been praised for its numerous clever and challenging boss battles.]

My typical process was to just to write and we would match the tunes up with the appropriate bosses later in the process. Often, once it was decided which tune would go with which boss, I would then tweak the music to be more appropriate for the situation (i.e. adding train-like effects to the train boss, etc).

Considering how long it took me to write the music, if I had waited until the game was finished to start, it still wouldn’t be out!

The approach to the music of Cuphead is very different than the music of most games. There are no real precise timings to line things up with and the music is not reactive or dynamic as would be more typical for games. It was more important for us to capture a “vibe’” as opposed to following the action, so I ended up just writing standard three-to-four-minute jazz tunes. Typically a player won’t even reach the end of the tune on a given stage since the tunes are long enough that the player has either died and had to restart, or would have already completed the level. 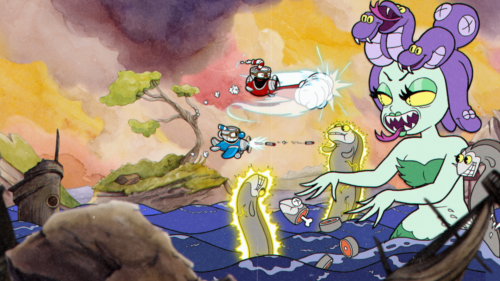 The only style guidelines I was given were “1930s big band.” As the game expanded to include levels and world maps, I started to think outside of that one specific era and style, and we decided on ragtime for the platforming levels and numerous stylistic iterations of the main four-note theme for the world maps. In some cases (as in the shrines), they just said “Do whatever you like.”

The most challenging part for me was trying to write in a highly derivative style while still maintaining my own identity. It was very important to us to approach the music in Cuphead with respect and a sense of history. And to understand and utilize the clichés that define a style while doing something new and original with them. For example, there are many firmly established conventions that define a Joplin-esque ragtime style.

The question then became how do I write in that style without just blatantly ripping off those that came before, but while still using the devices I had no hand in creating? And maybe more importantly, how to do that in a way that honours the work of the great composers and musicians that came before? I always approached this project more from the standpoint of “What if the golden age of big bands and the golden age of video games coexisted side by side?”

While a lot of it is pretty bonkers (it’s game music, it sort of has to be), we were very conscious to never let it descend into parody. We realized early on that this game had the potential to reach a demographic that has probably never been exposed to this type of music, so we had a responsibility to do it correctly. The sheer number of messages we get from people who have said that this was their first exposure to jazz music – and that it has opened a door to another world for them – has been very gratifying.

How did the recording sessions go?

I was extremely nervous before the first rehearsal. I wasn’t sure if some of the music was going to be completely unplayable, or whether there would be technical glitches – scores and parts getting exported incorrectly, wrong transpositions, etc). By the end of that rehearsal I knew that everything was going to be all right, and it was a great relief.

I don’t think the musicians knew exactly what they were getting into, and when they showed up many of them were like “What’s up with these tempos!?” But they more than rose to the challenge and obviously played their asses off. I think you can really hear the synergy that exists between them. Many have been working together for decades, in bands like the Boss Brass. More than that, I think it sounds like they’re having fun, which was very important for this music.

“Cuphead was a great experience. You don’t get a chance to play intense big band swing on video games very often (like never),” said Dave Dunlop, trumpet player on the soundtrack. “Kris’ writing was excellent for a relatively young man and the players really rose to the occasion, considering how difficult the music was.”

How do you account for the popularity of the recording session videos?

I feel the reason the behind-the-scenes videos have had such a great response is that people like seeing the process firsthand. There’s a visceral reaction to seeing real musicians at work, maybe for the same reason we go to concerts to see bands play the same songs that we already have on albums at home.

What was John Herberman’s role in the recording?

John Herberman was my mentor throughout the project, from first being a teacher and helping me parse through the composition process, to taking on the role of contractor for the sessions, and being the conductor of the band both in studio and at our first ever live show at the Kensington Market Jazz Festival. Without John’s experience and help the music would have been a shadow of what it eventually became.

“Kris is a very smart man and we developed a really good working relationship,” said Herberman. “He did a ton of research into 1930s music. So although I have years of experience composing for big bands and was able to coach Kris on some technical things like voicings for horns, his understanding of the 30s music style really helped.

“He entrusted me with a lot of responsibility for these sessions and that’s not easy to do. As well, working with the Moldenhauers was one of the most enjoyable experiences I’ve had in a long time. They were very supportive and wanted to do the sessions right and make sure everyone was having fun. And that’s not how things usually go these days.” 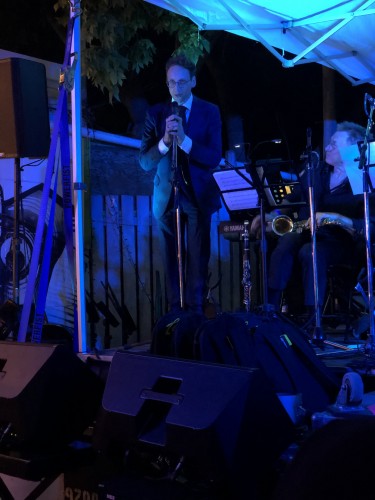 Who are your jazz-music heroes? Any particular influences for the music composed for Cuphead?

Is it unusual to have a full band playing a game soundtrack? Isn’t it usually electronic/synth music?

I think that using live musicians is certainly becoming more common, especially in AAA games, but on the indie side of things my impression is that it is typically too cost prohibitive. I certainly don’t know any other games that have used a live big band. An extra special shout-out goes to Jeremy Darby and Julian Decorte at Canterbury Music Company in Toronto. I cannot imagine having recorded this soundtrack anywhere else. And Jeremy spent months refining the mixes: getting just the right balance between clean instrument tones and a vintage sensibility.

Are you a gamer?

Growing up I was, but I pretty much stopped when I started my undergrad as there was just not enough time. I’m more of a casual gamer now, mainly just checking out games that are considered important that I should be familiar with, or games with acclaimed soundtracks so that I can keep up with what’s going on musically in the gaming world.

Cathy Riches is a Toronto-based recovering singer and ink slinger who hasn’t played a video game since Pac-Man, and who thinks it’s better to carry a tune than a grudge.