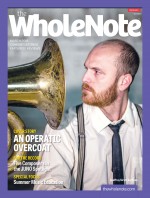 Asked about the photo, Geoff Sirett, who plays the lead in the upcoming The Overcoat: A Musical Tailoring is refreshingly candid. “I’d love to be of help, but I’m not really sure what to say. We did two photo shoots months apart with a lot of different ideas. I mostly went with the flow!” Tapestry artistic director Michael Mori was happy to fill in the blanks: “We were looking for a way to capture the essence and the newness of it. This world premiere production introduces new text, new music, opera singers, and live orchestra to the concept of Morris Panych’s original physical theatre piece, which was an enormous hit. Akakiy staring into the tuba gives us a taste of the character’s contemplative psychology, introduces the new dynamic element of music, and teases the surrealist world that the show traverses.”

There is a bubbling excitement in every conversation I am having with members of the creative team for The Overcoat: A Musical Tailoring, which will have its world premiere on March 29 at Toronto’s Bluma Appel Theatre in an epic three-way co-production between Tapestry New Opera, Canadian Stage and Vancouver Opera.

This excitement, from all accounts, was there from the very beginning of the project, although in the words of Tapestry’s artistic director Michael Mori, it began “almost by accident” at Tapestry’s annual new opera incubator, the composer librettist laboratory (LibLab). Each summer four composers and four librettists are brought together for the LibLab, and over the course of about ten days go through an operatic speed dating process, each creating with different partners four brand-new mini-operas no longer than about five minutes in length.

At the 2014 LibLab, award-winning Canadian composer and former LibLab participant James Rolfe was acting as mentor to that summer’s composers when for the first time ever, a composer had to drop out due to a musical emergency back home. Rolfe, who had been – in Michael Mori’s words – “feeling funny about just observing and not taking part,” now had his chance to jump into the mix, and as chance would have it, one of the librettists he was partnered with was two-time Governor General’s Award-winner and prolific playwright and director, Morris Panych. They hit it off immediately.

At the LibLab, pressure is high and time is short to find good ideas to base a new opera upon, and as Panych put it to me: “Let’s be honest, you start to run out of ideas and I thought, hey, The Overcoat, that could be interesting, because I’m always trying to think when I develop those little scenarios, could this be expanded into a full opera... and as a short story and not a novel (which are really hard to adapt) it already has a lot of the storytelling elements that you want.” At that point, though, he wasn’t really thinking yet about a full opera but about a particular scene “which I thought would be a charming scene to do with James, where the tailor and his wife measure (the main character) Akaky for a new coat” – the overcoat of the title. The project had begun.

To see where this new theatre piece is headed, it’s helpful to look back at where it has already been. Gogol’s famous 1842 short story The Overcoat, about an ordinary man whose life is turned upside down by first acquiring and then losing a wonderful new overcoat, has already had a long and successful theatrical life in the groundbreaking physical theatre production created by Panych with Wendy Gorling in 1998. Originally an experimental production for the students at Studio 58 theatre school in Vancouver, then a full-fledged professional production that took Vancouver and Toronto by storm, it travelled around the country and then the world, garnering great acclaim and many repeat engagements. The extraordinary thing about this earlier production was that it was performed without words. The storytelling was all done through movement, created collaboratively by the company under the guidance of Panych and Gorling, but also very tightly choreographed to carefully chosen and shaped musical selections from the works of Russian composer Dmitri Shostakovitch.

This first production was so quintessentially wordless, and so successful in its physical storytelling, that my first question to Panych about the new Overcoat was where the inspiration came from to do – in effect – the opposite, putting words back into the mix. His answer was that the experiment at the LibLab lit the spark but that once it did, the opportunity was there to explore a “whole different idea for the show than it originally had” in that there had to be “a development of intellectual ideas because now there were words” – something he had, in fact, long been contemplating.

The original version had been a thrilling and very successful experiment, but a new opportunity had now arisen – going back to Gogol’s original story and exploring it again from the point of view of philosophical and intellectual ideas that could be brought out through the new libretto and new score, to be expressed and explored by the singers with the audience. As Panych explained, they went back to the leading character Akaky being an accountant (as he is in the short story) and “I came up with this idea of singularity and numbers, of people counting and not counting, which developed through into the piece as an idea about human value and existentialism and what the coat actually means in terms of its intrinsic social and moral value.”

Back at the LibLab when the Overcoat scene was presented, it immediately struck a chord with both singers and audience. Mori says that Panych had very quickly written a very clever mini-libretto for the scene of the tailor and his wife creating the coat for Akaky “based on how deeply he knows the story and the interplay between the characters, and I think James was intrigued and wrote the music very quickly. We heard it and said ‘It’s almost Gilbert and Sullivan in a way’ – not because it was British, it was very Morris – but because it was so fast and the energy was really exciting.”

Almost immediately after the LibLab and the success of the presentation of the scene to an invited audience (including an intrigued Mathew Jocelyn, artistic director of Canadian Stage), Tapestry found the funding for a libretto workshop and the development snowballed from there, moving very quickly through two more workshops to reach the point where it is now about to go into rehearsal for the full production. Vancouver Opera joined in along the way, as co-commissioner of the piece, as did Canadian Stage, as a season presenter.

Both Panych and Rolfe commented upon the speed of this process, Panych writing the libretto very quickly as he knew the story already so intimately, and Rolfe connecting so quickly to the material that the score was also completed very fast. In Panych’s words: “I wrote the libretto and James took it, and I emailed and called him a few times and said ‘Any changes?’ and he said ‘Not really, it’s perfect,’ and he wrote the score. We did the first and second workshops and staged it [so that we would have a] template for working on the show, then see where to go from there.”

When I asked Panych and Rolfe about the original use of Shostakovitch and if it had any bearing on the new music, both said that it was really just a starting point and that Rolfe’s music is completely new and original, although “very Russian in feeling,” and that this was both right and exciting. The cast has been cut down to 11 from 23, although there is still a “mad chorus” and ensemble numbers that Rolfe says he is excited by (as well as by the character interaction throughout). The show is sung through without spoken dialogue, but written so that the story and ideas can be clearly shared and communicated, and with a great sense of energy and pace. As Rolfe says, the score is also written with an awareness that the production will still have a very strong physicality. “The music is a twisted circus,” Panych says. “It’s acrobatic, you feel its tunefulness, you feel the beat of it but you don’t recognize it, similar to Prokofiev but in a much more modern way; it pushes forward in unexpected and exciting ways.”

There will also be a 12-piece orchestra, a luxury for a new opera production, led by music director Leslie Dala.

Panych is very clear that people should not come to this new Overcoat expecting to see the old version. The famous big set pieces created for the wordless choreographed world of the original, such as the ballroom scene or tailor shop with “semi-naked men in the shop creating the coat,” will not be there. With the smaller cast and the emphasis on the singing, the words, the ideas and the production will be much more intimate. Although the original design team of Ken Macdonald, Nancy Bryant and Alan Brodie will be creating a similarly designed world on a smaller scale, the action will be purposefully much more “downstage, closer to the audience.”

At the same time, there is still a desire to retain some of the signature theatrical physicality of the original and Wendy Gorling will be joining the company at the start of rehearsals as movement director; two members of the original wordless Overcoat will also be there to anchor that physical style. Most of the singers in the cast have been with the show through the development process of the workshops, cast primarily for their singing and acting ability, but also with an eye to their ability to move and take part in more experimental production styles. Peter McGillivray and Keith Klassen, in particular, being longterm performers with Tapestry and in new opera around the country, are known for their expertise in interpreting new work.

Joining the cast in the most recent workshop as the leading character Akaky was Geoffrey Sirett, a young Canadian baritone with a quickly growing reputation not only for the richness of his baritone voice but for his fearless physicality in more experimental productions, with Against the Grain Theatre, for example, where he shone in their staged Messiah. Cast in the workshop on the advice of Mori, Sirett proved adept at the physicality explored during that process, impressing the director and staying on to lead the company as work on the full production began. While he didn’t have physical training as part of his opera studies, Sirett credits his early experience working with choreographers James Kudelka, Lawrence Lemieux and Bill Coleman on dance/opera crossover works at Citadel + Compagnie as providing him early on with “the opportunity to explore contemporary movement and get in touch with my physical self.” 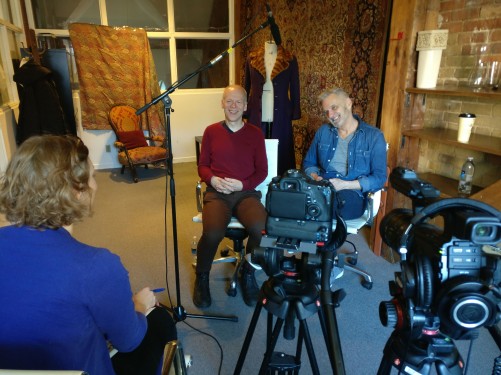 As this issue goes to print, The Overcoat company will be in rehearsal and the process will have begun of discovering exactly what the eventual production will look like, how physical it will be and what new nuances might arise. The template is there but the final journey of discovery is just beginning.

Hearing the show described as almost more of a “musical than an opera” by its librettist and director because of its clarity, energy and pace, it sounds as though The Overcoat: A Musical Tailoring is living right on that edge of new opera and music theatre creation, reaching to find the best medium to tell stories that matter and connect with audiences of today.

Opening night is March 29, with two previews on March 27 and 28 and performances until April 14. The show then travels out west, where it will play at the Vancouver Opera Festival April 28 to May 12. 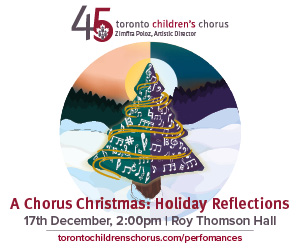