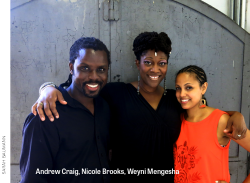 There is an old adage that says, “If it ain’t broke don’t fix it,” but that is exactly what composer/lyricist Nicole Brooks did with Obeah Opera.

In 2012, the hit production earned a nomination for a Dora Mavor Moore Award for Outstanding New Musical/Opera. Nonetheless, the Obeah Opera that will be unveiled at Nightwood Theatre’s New Groundswell Festival (September 11 to 14) is a totally new work. “I always knew it wasn’t complete,” says Brooks. “Both the story and the music had to evolve. The ancestors wouldn’t allow me to rest.”

The ancestors Brooks references are the West African female practitioners of the ancient healing art of obeah. Obeah women who were captured and enslaved brought their healing practices to the Americas where the pressure of Christianity converted the concept of obeah into an evil force. Even today, some superstitious people from the Caribbean fear the very sound of the word. When Weyni Mengesha, the director of the new version, asked each member of the cast to bring one fact about obeah to the first day of rehearsals, over half cited negative connotations. One cast member said her mother even refused to talk about it.

Both the old and new versions of the opera give voice specifically to the Caribbean obeah women sold, during the 17th century, into the Massachusetts Bay colony where many were accused of witchcraft during the Salem witch hunts. The witch trials were triggered by mass hysteria on the part of white teenage girls. This is the same territory covered by Arthur Miller in his play The Crucible, but with one big difference. Brooks puts the focus on the black women of Salem.

Brooks became interested in the Salem witches when she began to research her own roots in African spirituality: “The deeper I delved into West African magic and healing, the more I found that every road led back to obeah. Arthur Miller has only one black woman – Tituba – in his play, but there were other black women in Salem, a minority who were silenced by the white men who write history. It became important to me to give these women a voice – to empower Mary Black, Candy and Sarah, along with Tituba.”

In order to put Obeah Opera back into development, Brooks worked with new music director Andrew Craig. In Canadian music, Craig is an A-list icon and a polymath. He is variously a singer, multi-instrumentalist, composer, arranger, producer, director, broadcaster and impresario. The two first got to know each other when Brooks was in the chorus and Craig was music director for Djanet Sears’ The Adventures of a Black Girl in Search of God. Brooks and Craig formed their own company Culchahworks Arts Collective in 2013 to present stories of the African diaspora through the broad spectrum of the performing arts. “Andrew is the best of all possible worlds,” says Brooks.

Craig certainly had his work cut out for him. Brooks does not read or write music. Instead, she sings every part of every song to Craig who uses transcription technology to create the hard copy of the vocal score. For the most complex eight-part harmony, Brooks is able to sing each melody line – no mean feat. The music for Obeah Opera is notable for two things. First, the show itself serves as a tour through the history of black music because Brooks embraces every style – African harmonies, tribal chants, gospel, blues, jazz, spirituals, R&B, folk, calypso and doo-wop, to mention but a few. The second fact is that the all-female cast (in both versions) sing a cappella. Every word is sung and the new version, twice the length of the old, features 68 different pieces of music, 80 percent of which is new material. The first version featured 15 women; the Groundswell production has a cast of 20.

Brooks understood that she needed better-funded partners to help take Obeah Opera to the next level. With that in mind, she held a showcase in 2013 at Wychwood Barns where a small cast put on a potpourri of music, movement and text from the show. To oversee the showcase, she hired veteran artistic producer Nathalie Bonjour, late of Queen of Puddings Music Theatre. This ensured a class act. Only big guns and mid-sized companies were invited, among which was Nightwood Theatre, represented by artistic director Kelly Thornton and literary manager Erica Kopyto. Neither had seen the original production, but at the end of the showcase, Kopyto turned to Thornton and said: “I think the magic just happened.”

Nightwood is one of Canada’s most respected feminist companies, and for Thornton, Obeah Opera, with its newly discovered history of Salem black women, was right up their alley. Brooks’ dissatisfaction with the original Obeah Opera was the lack of a clear narrative line. In fact, in my review at the time, I called the production “a collection of experiences,” the first act setting up the arrests of the obeah women and the second act taking place in the holding cells of the prison. Brooks comes from the worlds of music and film, carrying on two parallel careers, one as a jazz/church choir singer, the other producing and directing for film and television. Her weak spot is actual playwriting. “We could give her a dramaturge,” says Thornton, “to take her through the process.” That dramaturge was Kopyto.

“Nicole wanted a story that had a beginning, middle and end,” Kopyto says. “We started on page one by building up a plot through storyboarding, coming up with a 20-page synopsis and character outlines. She had never approached writing that way. We worked on the narrative only. The original version didn’t even have a script – just a hodgepodge of lyrics and stage directions.” The story that developed is Tituba’s journey to self-awareness and growth. She is now the central character, arriving on a slave ship from the Caribbean, and being sold into the family of Rev. Samuels who are all new characters. “Tituba has a revolutionary spirit, and the reverend thinks he can tame her,” adds Kopyto. “Instead, she finds her true voice through obeah. She accepts her ancestral history as the white colonials try to quash it. The reverend’s daughter Betty and her friends see Tituba as confident and commanding.” All important in the development process was a workshop with actors just reading the lines and not singing, in order to nail down the text of the libretto. Says Brooks: “The 2012 production was a sketch, a blueprint. Now it’s what it’s supposed to be.”

Director Mengesha is part of the dream creative team which also includes music director Craig and designer Astrid Jansen. Only choreographer Anthony “Prime” Guerra is a holdover from the 2012 production. Mengesha was an obvious choice because she has experience with large casts. (’Da Kink in My Hair had 18 people onstage.) She has helped Brooks in the development process by clarifying the narrative arc, suggesting cuts and edits and strengthening characterization. On the other hand, she has never directed an opera before. “Text is different when it’s sung,” she points out. “It’s a new learning curve for me. I usually have a vision in my brain when I begin rehearsals, but this production is all organic. I’m responding in the now – alive, present and experimenting.”

Brooks and Craig did the casting over a slow two-month process. Brooks, herself, is playing Tituba. The duo were looking for singing actors who could “throw down” the guts of the music. The original all-black cast has been modified to have white actors play the colonials, but it is still an all-female preserve. Gender-bending does occur, however, as the women also play all the men. “The story intrigues me,” says Mengesha. “I came to theatre because plays can speak about things that matter. I can relate the hysteria of the young girls to today’s response to terrorism. The obeah women threatened the status quo. Obeah Opera embraces themes like questioning ideas and traditions that we’ve inherited.”

It is important to point out that the September Groundswell production is also considered a workshop. As Kopyto says: “Obeah Opera is a work in progress, and the production is a snapshot of where we are now.” In fact Groundswell, which features two staged plays and six readings, is all about development. Adds Thornton: “It’s necessary to see how new plays live with an audience. A staged workshop production helps test drive the script. The audience feedback is crucial.”

The actual world premiere of the new Obeah Opera will take place during Panamania, the arts and culture arm of the Pan American/Parapan American Games in Toronto next summer. The work is one of 27 unique commissions that cover all artistic disciplines. The creative team sees the Groundswell staging as an important run-up to the Pan Am production. Don Shipley is the culture czar who has programmed Panamania. Says Shipley: “We were particularly pleased to invest in Obeah Opera. It’s an example of great creative collaboration with great partners. The format is highly innovative, the historical subject matter is fascinating and the creative team is imaginative. Our commissioning funds are providing an opportunity for Nicole Brooks to reinvestigate the work and strengthen the narrative.” For her part, Brooks hopes that Panamania will allow her to raise the cast number to 25.

Brooks agrees that the many styles of black music in the show make the piece hard to define. Shipley calls it “a musical odyssey,” while Thornton’s sobriquet is “a theatrical epic.” “Obeah Opera is spectacle,” says Thornton. “It’s a gigantic financial undertaking, but I believe that audiences crave spectacle. Right now Obeah Opera is a sketch, but it will become an oil painting for the Pan Am Games.”

(Obeah Opera runs as part of the New Groundswell Festival at Dancemakers Studio, September 11 to 14 and as part of Panamania at the Young Centre, July 20 to August 9, 2015.)