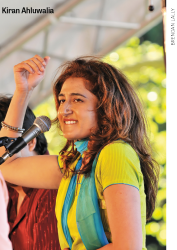 In his 2005 article “Ghazal Original” British music critic Ken Hunt reckoned that Kiran Ahluwalia “has the potential to become one of the great ambassadors of Indo-Pakistani diaspora music, not [just] from Canada, [but] from anywhere…” (fRoots Issue 269). With each new album she has come closer to fulfilling that promise; two JUNO Best World Music Album awards (and several nominations) later, Ahluwalia has proven her perennial appeal to audiences and critics alike. In 2009 the Songlines/WOMAD Best Newcomer of the Year Award heralded her as an international world music star of growing stature. Various World Music charts over the years have echoed that trend. Her 2011 cover of the qawwali song Mustt Mustt, by the celebrated late Pakistani qawwali singer Nusrat Fateh Ali Khan, recorded with the Malian group Tinariwen, has garnered an impressive 314,000 visits on YouTube.

Since Ahluwalia‘s first CD in 2001, her string of album releases, accompanied by evolving instrumentation and stylistic components, has been called “one of global music’s most interesting adventures.” It seems that each new album marks personal growth, the expansion of her careful listening to yet another geo-cultural zone of our world. She has also shown a continued eagerness to contest the borders of her musical comfort zone in live performance. For instance, last year she shared the Harbourfront Centre stage with the rising Inuk throat singer Tanya Tagaq as well as divas from other musical traditions. On other occasions she’s sung with electronica groups Eccodek and Delerium, with an Afghan rubab player and a Cape Breton fiddler. She has performed her compositions, as arranged by Glenn Buhr, with the Manitoba Chamber Orchestra. The list of genres she’s collaborated in also includes Portuguese fado, sub-Saharan percussion, Pakistani qawwali, and most recently, African blues. Incorporating just one culturally “other” element in one’s music can be problematic on several levels, yet she integrates each new element with seeming grace and ease.

Such a vast range of musical interests is indeed impressive. Where does it come from? Does this rare quality reflect a Canadian, or a specifically Torontonian sensibility? How did she arrive at this idiosyncratic, transcontinental and evidently very successful musical fusion?

I caught up with Ahluwalia on August 15 to find some answers to these questions. She was in the middle of her day in NYC and I was in my Toronto office; we spoke via Skype.

“I was born in Patna … in [North Central] India to Punjabi parents,” she began. “Some of my earliest memories were of learning English Mother Goose nursery rhymes from my parents, but also Indian songs. They were both ghazal “passionistas”; they held singing parties featuring ghazals.”

I wondered about her earlier musical formative experiences and teachers. “Back in India in addition to [North] Indian classical music our family would also listen to Bollywood songs on the radio,” Ahluwalia recalls. “I was nine when we moved to Toronto in 1974, and I began studying classical Indian music with several vocal teachers, finally spending about six years studying classical raag with Narendra Datar. I also continued singing ghazals on my own and with my parents while completing my University of Toronto degree in Industrial Relations.” Did a career in IR ever beckon? Perhaps surprisingly, the answer was maybe. “In 1990 I went back to India for 14 months purely to study vocal fulltime with classical vocalist Padma Talwalkar in Mumbai in private riyaaz.” She thought this extended period of music immersion would “get music out of my system so I could then get on with my regular life!”

It seems that it did no such thing. Despite returning to Canada to complete an MBA at Dalhousie University, during that time Ahluwalia still “managed to keep my mornings free for my music.” Clearly she couldn’t abandon her passion for singing, and returned to Bombay for the summer – again for more intensive music study. One benefit of her MBA though: it did help her land several jobs. These expanded her view of the music of the world and how it was possible to include corners of it in her own South Asian-centred music.

Her position at the Toronto offices and studios of the CBC for instance, “proved to be a pivotal one in my music career,” she says. “I owe much to Ann MacKeigan.” For ten years MacKeigan produced the pioneering world music radio show Global Village for the CBC. Ahluwalia continued, “Ann taught me several key things. One was how to take a foreign music with non-English lyrics, such as Urdu and Hindi, and to present it to the Canadian public. She also taught me how to market and present diverse kinds of music – what we now call world music – and how to apply some of these lessons to my own musical outlook.” In the late 1990s her MBA got her into the NYC door of the world music specialist label Putumayo Records. There she honed her understanding of the genre’s audience, production and marketing. When Ahluwalia returned to Toronto in 2000 she was ready to make a fateful move – to produce her first commercial CD, Kashish Attraction, released in 2001.

With the imminent release of Ahluwalia’s latest album Sanata: Stillness, her discography will now be six albums deep. Sanata is further proof that the potential Ken Hunt heard in 2005 is being realized in unexpected ways. The music is a synthesis of Ahluwalia’s signature masala of her unique take on ghazal and Punjabi folk song. At times a backbone of her classical Hindustani musical training is discernable. On this studio outing she doesn’t use the Saharan blues star groups Tinariwen and Terakaft, as in her award-winning 2011 CD Aam Zameen: Common Ground. Yet their deep African desert groove and electric guitar sound and riffs still echo through the supple, slinky guitar work of Rez Abbasi, Ahluwalia’s life partner, arranger and producer. It’s all woven together with jazz- and sometimes rock-infused arrangements.

Toronto audiences will be able to witness the concert launch of Sanata: Stillness at Koerner Hall October 3. A sign of increasing partnerships among world music presenters, perhaps, it’s part of the 13th annual Small World Music Festival. It’s also presented by the Royal Conservatory in partnership with the Aga Khan Museum. On this occasion Ahluwalia and her band are in fitting company: they split the bill with Rizwan-Muazzam Qawwali, a large group headed by Nusrat Fateh Ali Khan’s nephews and leading heirs to his considerable legacy. I see Kiran Ahluwalia’s willingness to share the concert with a hardcore qawwali group as yet another demonstration of her admirable dedication to crossing – and sharing across – musical borders.