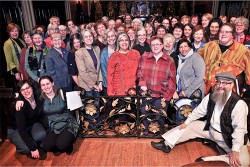 If you have a desire to sing, you’d be hard-pressed not to find a place for your voice these days. I’ve been studying community music in Toronto, and my sneak peek at The WholeNote’s 2012 Canary Pages confirmed my own sense of the many opportunities open to singers of all ages, abilities and interests. And that’s just what’s listed in these pages. If the Canary Pages are the tip of a singing iceberg, then there are likely hundreds of places to sing in Southern Ontario. And by all accounts, Ontarians are singing.

Even beyond choirs, there has been a recent renaissance of singing, perhaps connected to reality-based televised singing competitions, from Canadian Idol to The Voice, from The Choir to Canada Sings. People today are singing in numbers that would have been exceptional a mere decade ago. Choirs Ontario released a research report in 2011 that estimates one in seven Ontarians sing in a choir, whether school, church, community, or professional. Of those types of choirs, there seems to be a groundswell of community-oriented singing. Yet what exactly is a community choir, and what distinguishes it from other kinds of choirs?

The term “community” is always troublesome, but particularly so in a choral context: everyone knows what community is and everyone uses the term in different ways. I tend to define community choirs as open and inclusive singing environments: choirs that focus on building their social relationships as much as or more than producing musical excellence. Some could legitimately object to my distinction, which suggests that professional or semi-professional choirs have no community. Isabel Bernaus, a Toronto-based conductor of Common Thread Community Chorus of Toronto as well as the Jubilate Singers, feels that both choirs exemplify community, though in different ways. Common Thread is non-auditioned, implementing deliberate musical and social inclusion policies to welcome all singers regardless of musical experience or skill level. Jubilate Singers, on the other hand, is an auditioned chamber choir, yet there is a strong sense of community within the choir. “Singing together isn’t the same,” Bernaus says, “if the people singing have no connection with each other.”

In other cases, use of the term community is linked to the presence of amateurs, particularly referring to choristers who have few skills or less experience. This might be true to a certain extent for some choirs, but this distinction doesn’t hold well across the board. More often, a divide between amateurs and professionals in a choral context is less an indication of skill level and more an indication of whether the choristers receive an income for their work, similar to the distinction between amateur and professional athletes. Whenever the word “amateur” was used in these Canary Pages, it was almost always next to words like “professional”or “musical excellence” suggesting that while those choristers are not compensated, they are assumed to meet a high standard of experience and skill.

In other cases, the word community in a choral context is used to indicate non-affiliation — in other words, that the choir in question is not associated with either a church or a school. Yet, the usefulness of such a distinction quickly breaks down with a little scratching below the surface. Choirs Ontario estimates that a whopping 58% of choirs in Ontario have some form of church affiliation. Compare that to community and professional choirs, which comprise a combined total of 11% of all choirs in Ontario. Yet church choirs have often automatically been excluded from community choir surveys and research.

“A church choir is a community choir but it’s a specific kind of community,” suggests Becca Whitla, director of both Echo Women’s Community Choir and Holy Trinity Church Choir in downtown Toronto. “Church choirs provide an opportunity for singers to experience the mystery of the divine.” Whitla, who is currently completing a Masters of Sacred Music at the University of Toronto, points out that something mysterious happens in secular singing contexts too, something transcendental or transformative. However, in sacred contexts, people are intentionally seeking this engagement with the divine through song. “Singing is embodied and allows us to have that opportunity to connect through something transcendent. It doesn’t happen only in church. It happens when it happens.” 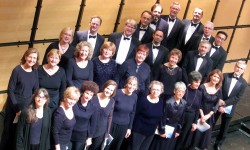 Clearly, the term community is complex to the point that it might not meaningfully indicate any particular set of singing practices. So in my own research, I’ve looked for other trends or terms that might indicate what kinds of choirs aim primarily to be inclusive, and what kinds aim primarily for a precise musical product, or what some might call “musical excellence.” Where I have started to notice a fundamental split in process and goals was when I considered whether choirs held auditions or not.

Not every listing in the Canary Pages indicates whether potential singers need to audition, but from those that do, there definitely seems to be a different ethos towards musical and social objectives depending on whether auditions determine entry into the choir.

Non-auditioned choirs, or at least those choirs that explicitly state a no-audition policy in their write-ups, tend to talk about providing welcoming and supportive atmospheres, encouraging anyone interested to join. Choirs that clearly have auditions describe their choral settings and goals much differently. These choirs tend to consist of professional or semi-professional choristers, aiming for musical excellence.

Further, auditioned choirs tend to be smaller ensembles. They tend to tour and record. They are also far more likely to perform with more elaborate instrumentation. It also appears that many (though certainly not all) tend to focus on Western European classical music, although from different time periods, and from varying geographic regions.

Now of course, there is a whole layer of choirs within the Canary Pages, as beyond, which blurs this distinction between auditioned and non-auditioned choirs. Some don’t indicate in their write-ups whether auditions are held. Some hold auditions merely to determine placement within the choir. Yet others hold auditions, but once accepted, singers are nurtured towards their own musical development. While there seems to be a tension between seeking musical inclusion and seeking musical excellence, it is potentially a healthy tension pending on how you view what counts as musical excellence.

Bernaus, who has studied as a conductor and as a music educator, is one who suggests that neither musical excellence nor musical inclusion need to be sacrificed for the other, although she notes that many current choirs seem to favour one over the other. “For some, musical excellence is defined as a standard — ‘this Requiem is excellently performed if it demonstrates these particular qualities.’ I think musical excellence is defined by whether the group is giving the best they can give in each precise moment.” When a group is giving everything it can, she believes, it can be magical.

I should be clear here that I am not advocating one particular kind of choir over another. While I have my own preferences, multiple kinds of choirs can offer places for everyone’s voices, regardless of ability or interest. I hope it’s also clear here that even in considering whether choirs hold auditions, the line is not definitive. Perhaps in thinking about choral singing practices, it might be more helpful to think in terms of a continuum rather than a distinct, unmovable boundary between irreconcilable opposites.

In fact, choral singing, overall, is only one of many kinds of singing practices, and represents one of many kinds of music-making. The Canary Pages are a great resource, but they are not definitive. Many group singing activities happen beyond these pages, although informal singing opportunities can be more difficult to find.

Regardless of the kinds of experiences singers are looking for, choristers and community singers are perhaps united by a desire to sing with others, whether towards social singing, developing musical skills, or performing challenging musical styles and repertoires. Finding a good fit for each of our particular skills, experiences and interests is finding a home for our voices.

Good luck with your search.

Deanna Yerichuk is a singer, voice teacher, and conductor in Toronto, and is currently pursuing her Ph.D. in Music Education at the University of Toronto specializing in Community Music. She can be contacted at singing@yerichuk.com.