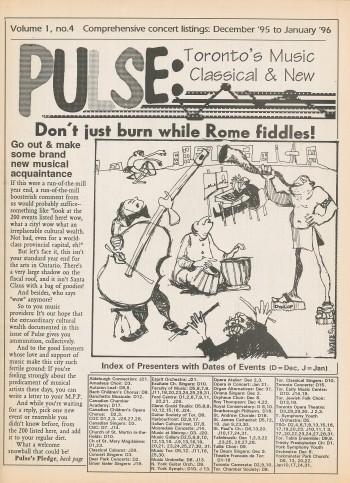 Sometimes the way I can tell that things are going well around here is by noticing how small, in the overall scheme of things, the things I am fretting about actually are. Like two days ago when I found myself agonizing about whether it would be more accurate, on the cover, to describe this two-month issue as “combined” or “double.” “Double,” I told myself, is how I think we have usually done it. But with the concert scene being significantly put on hold in the latter part of December, for Festivus or whatever you choose to call it, and the first couple of weeks of January significantly dedicated to recovery, there isn’t double the amount of activity. “Combined” would be more accurate. I went searching for answers in our “rear view mirror” – the complete 23-year flip-through archive of this publication on our website – to see what we’ve done in the past, all the way back to Vol 1 No 4 in December 1995. (Click on Previous Issues under the “About” tab.)

The results: “double” takes the prize by a long way, with “nothing in particular” a respectable second (as in the cover of Vol 1 No 4 illustrated here). “Combined” is almost nowhere to be found, except this time last year. (Things must have been going well for even longer than I thought!)

There were three other things that I particularly noticed, as I flipped my way through the archive.

First was how often the subjects of the covers of past Dec/Jan issues, especially the early ones, still crop up in our current coverage: Tafelmusik’s Ivars Taurins in his “Herr Handel” Massey Hall “Sing-Along Messiah” outfit (Vol 2); Val Kuinka, who will be stage-directing Highlands Opera Studio’s production of Andrew Balfour’s new opera Mishaabooz’s Realm this December (Vol 3); the Toronto Children’s Chorus (Vol 5) and mezzo Krisztina Szabó (Vol 7) who will appear together in the TCC’s concert “The Fire Within” December 16 at Roy Thomson Hall; Barbara Hannigan (Vol 6), just here in November for a Koerner art song recital, who dropped into her hometown in December 1999, fresh off her Lincoln Center debut, to see in Y2K as the Merry Widow for Toronto Operetta Theatre, whose New Year’s Day-straddling productions of light opera and operettas are a time-honoured fixture of the holiday season … The list goes on.

Second, amusingly, was noticing the different ways the cover copy on these various issues riffs on the contrast, performance-wise, between December and January: “The Holiday Season and Its (Not-So) Flip Side”; “December Glitter, January Gold”; “To the Holidays and Beyond!”; and (my favourite), “Mid-Season Blip.”

Third, and this is for you, whomever you may be: in analyzing the pattern of when we did and didn’t make an effort on the cover to call attention to the fact that it was a double issue, it seems that the years we made an extra effort (like the words DOUBLE ISSUE in 30-point type around a medallion of two-headed Janus) were right after years when we had made no effort at all. And that is because those were the years when you phoned me up to complain that it was already January 8 and your January WholeNote had still not arrived.

It won’t this year either!

The Rear View Mirror: The context for the headline on Vol 1 No 4, pictured here (still one of my favourites), is that it coincided with a time when funders of the arts (in particular the Ontario Arts Council) were reeling under the impact of the politics of the time. The “Common Sense Revolution” it was called. This year, for the first time in many years, we are seeing significant increases in funding to the OAC (increases that are being passed along). If it’s a sign that the value of the contribution that artists make to the wellbeing of Ontario, economically and in every other way, has been recognized, it’s a welcome sign indeed.