Musical couple Maryem and Ernie Tollar have been performing music in Toronto for about 35 years.

Born in Egypt, Maryem works with Arabic lyrics and melodic inspirations to inform her work. Ernie, who plays saxophone, bansuri and ney, has contributed to the Toronto music scene and performed in jazz and folk festivals around the world. Together, they’ve made a life of music. Although the work is not always stable, the two have been able to subsist over the years in downtown Toronto, supplemented by Maryem’s public school teacher salary.

That was, until the pandemic hit, and everything changed for the live music industry in the city. While many at home were learning new instruments back in March 2020 in an effort to pass the time, the Tollars put down their instruments for the first time in three decades.

“Overnight, all of our work got cancelled,” Tollar says. “Everything.”

Of course, the Tollars were not a unique story. Musician Kobèna Aquaa-Harrison had a similar experience returning from a trip to Ghana in March 2020.

Born in Ghana, Aquaa-Harrison moved to Bermuda and then Toronto as a teenager. When he made the smallest move—from Scarborough to downtown Toronto—he discovered a music scene he longed to one day be a part of. In Toronto, he composes and produces music using the guitar, bass, drums, violin, and a host of other instruments.

Within a few days of returning to Toronto from his trip to Ghana, all of Aquaa-Harrison’s gigs were cancelled, and he wondered why he’d even bothered returning. “At one point, I was wondering if I should just sell all my instruments,” he says. “But who’s going to buy them? Everyone else is also sitting home.”

Luckily, within a few weeks, the world adapted: Aquaa-Harrison started receiving phone calls for online work he could record in his own studio. He spent the next year and a half working on jingles for corporations and recording online performances in solitude.

While grateful for the work, he missed being front and centre stage.

“I’m a performer, I like performing for people,” Aquaa-Harrison says.

Like most of us stuck at home, the musicians expected that the stay-at-home orders would end any day, and they could all get back to doing what they loved. But as it turned out, gigs planned even a year, a year and a half in advance, would eventually be called off one by one, leaving bills, anticipation, and purpose in their wake.

Musicians grew grim—and worried. While the Tollars and Aquaa-Harrison were fortunate to have other revenue streams available, not everyone could be so lucky.

Many of these stories were concentrated in one downtown west Toronto riding: Davenport. Bustling with the most musicians per capita, the Davenport riding has been an up-and-coming neighbourhood with equally up-and-coming real estate prices.

Aline Homzy noticed the financial effects the pandemic was taking on her neighbours. A Davenport native herself, established violinist and producer Homzy was concerned about the pandemic’s toll on the music industry. Worried her neighbourhood’s driven-up prices would be driving out culture and music with them as musicians lost their revenue streams, Homzy took matters into her own hands.

She sought out a diverse cast of local musicians who could perform original music in a concert-style film. Her goal was to provide financial compensation to artists, and put a kick in the pants of the local music scene she so deeply cherished.

The result was Sounds of Davenport: a virtual concert, featuring 17 performances by 28 musicians from the Toronto Davenport riding, many of whom belong to the LGBTQ+ and BIPOC communities. From September 20-22, 2021, the musicians performed original music at the Paradise Theatre, where they were recorded by Homzy’s team; on October 23, these performances debuted together in an hour-and-a-half-long virtual compilation available on YouTube. Before each set, viewers are told in writing the artist's name, the name of the work they are about to perform, and the musical instrument they will use, allowing performers to get straight into their set without story or interruption. Although most performers do not speak during the show, the audience gains the feeling of knowing them through their music.

With funding from the Canada Arts Council, the Ontario Arts Council, and FACTOR, Homzy was able to pay all the participating artists. Homzy was also pleased to show her government representatives the musical talent of her riding, a display particularly meaningful during the time of the federal election.

Of course, the restriction of no live audience was a limitation. “It is very strange to do a whole song, finish, have no reaction, and then go onto the next song,” Ernie Tollar explains.

However, instead of filming as if there was one, Homzy and her team made the creative choice to have the artists’ backs face the audience seating.

For Aquaa-Harrison, this was a brilliant artistic statement, as it demonstrated the ability to choose truth: these performers would not pretend a live audience was watching them.

Instead, the audience became the five or so people producing and filming the artists.

“There is always an audience,” Aquaa-Harrison says. 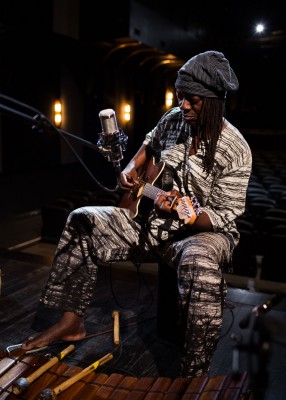 For many of the 28 musicians featured in the streamed Sounds of Davenport video on October 23, the project represented a chance to perform their original music after many months at home.

For some, these months caused a dip in musical inspiration. Luanda Jones, Brazilian singer and guitarist, found that the pandemic didn’t allow for much creativity in her musical juices. Only once she regained the ability to collaborate with other musicians—through events like Sounds of Davenport—was she able to feel reenergized. Her song “Desigual,” a Brazilian-inspired tune she wrote about meeting her husband, is performed alongside drummer Chaveco, who plays the congas.

Aquaa-Harrison’s “Respec Ka Fait Bon Mot (Respect),” was written 20 years ago—way back when the musician was in high school. “People were always arguing or saying things without actually listening to one another or respecting other people’s point of view,” he says.

In his music, he wanted to get one simple message across: do yourself and everyone else a favour—listen to the other person. This message proves particularly important during election season and a world-dividing pandemic.

While some tunes had clear intentions, others were less specific.

Maryem and Ernie Tollar’s “Secrets,” or in Arabic, “Asrar”—an original song by Maryem—was performed by the couple using the qanun (Arabic table harp) and the Egyptian ney flute. Though Maryem’s intentions were loose when she composed the song, they’ve found that many of her listeners have found comfort from grief within its lyrics.

Like so much of music, it offers itself up for interpretation: one line in particular - “all the secrets of the world can be found within our own souls” - has become meaningful for those lonely and grieving. 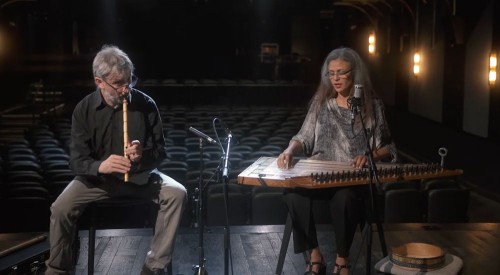 Although he’s now used to performing with no audience, Aquaa-Harrison is grateful for the day his neighbour Aline—whom he did not know well—approached him and asked him to be part of her event.

“All the artists are like jewels,” he tells me, adding that it is so important to make these artists visible with a concert-like performance.

But for Homzy, the real significance lies in the pandemic-inspired, take-home video version, which also serves as documentation for the musicians. “The real success is having these artists with this super high-quality video of their performances,” she said.

Although the ongoing pandemic has taken lives, opportunities, and loved ones away from so many, Homzy won’t allow it to take the cultural and artistic richness from her community.

When Homzy speaks during the event, she expresses gratitude for the knowledge that walking outside her own door in the Davenport riding often means bumping into colleagues, fellow musicians, and friends. Her community is vibrant—and her main intention behind producing Sounds of Davenport is doing everything she can to keep it that way.

The concert film Sounds of Davenport, presented by Aline Homzy, was premiered online on October 23, 2021, and is available for viewing on Youtube here.

When not writing, Samantha Fink teaches English Language Arts at the middle school level. Her writing is mostly featured in the Queen’s Journal; for her article on invisible disabilities on campus, Samantha was awarded Amnesty International’s 2019 Youth Media Award.