A wraithlike water-dweller, a covetous goddess, a phantom bride. Welcome to the world of Of Tricksters and Trolls, the Toronto Consort’s latest performance released March 16 on their new streaming platform, Early Music TV. Filmed earlier this year at the 918 Bathurst Centre for Culture, Arts, Media and Education, the virtual performance features traditional music from Scandinavia alongside dramatic retellings of medieval and folk tales from similar regions. Don’t be fooled by the whimsical premise – the Consort wades into the murk of early Scandinavian repertoire to retrieve pieces that are merry, mournful and haunting in turn. It is a seriously transporting concert.

The show opens with the eerie, decaying notes of a vielle à roue (hurdy-gurdy) played by Ben Grossman, and a close-up shot of five ivory figurines clutching knives, horns and shields – keen medievalists will recognize the Lewis Chessmen, 12th-century playing pieces carved into fierce Viking warriors. (We’re not in Kansas anymore.) Then Peter Tiefenbach, the evening’s storyteller, launches into the first of many tales starring the fickle and vindictive, yet beautiful and funny, Norse gods, as well as the shadowy creatures of later oral tradition.

Suspenseful sound effects are woven delicately into the narrative. Soft, spaced notes from harpist Paul Jenkins mimic falling snowflakes, while Grossman on drum and Katherine Hill on the nyckelharpa create rumbling, Thor-triggered thunder. Tiefenbach stays in character, if you will, easily flipping between whiny dwarves and breathy goddesses, without descending into pantomime. Refreshingly, nobody interrupts the flow to announce names or historical anecdotes; the tension is sustained, the spell unbroken.

The repertoire, for the most part, is paired sensitively with each story. After a passage describing Freya’s longing for a golden necklace, Hill sings, or rather hums, the wistful Drømde mik en drøm, a fragile 14th-century Danish melody whose lyrics describe a similar longing for fine cloths. (Hill is a joy throughout the show – her soprano voice is pure and her delivery deeply felt, while in Brudmarsch F. Nas she plays the nyckelharpa with gorgeous earnestness.) After a mention of the Nøkk, dangerous spirits who live in “dark, bottomless lakes,” comes Heimo og Nøkken, a concert highlight, from Norway. Grossman ekes out a slow, haunting solo on the vielle à roue, dusted with muted vibrato, and is eventually joined by Alison Melville on willow flute and Jenkins on harp, who each take gentle turns with the melody. Jenkins creates ripple-like sounds with spare, controlled plucking, producing a cool atmosphere that is believably Nøkk-infested. 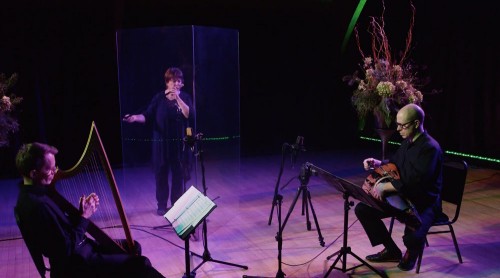 In many pieces there is a delicious wispiness. In Anna och Wilhelm, for instance, a dialogue between a man and the spirit of his lover, Hill sings the sad Swedish lyrics with delicately trembling melismas. Melville trails her on willow flute – a peculiar wooden instrument with only two holes on either end – using airy, fraying tones. The musicians convey the instability of this world, a place where a creature might transform into something quite different at any moment.

As Melville, also a recorder player and artistic director, explains in the detailed program notes, this is not the type of early music that Consort audiences have come to expect. Little recorded music from medieval Scandinavia has survived, apart from a few liturgical works and other fragments, so instead of confining themselves to this measly offering, Melville decided to include traditional pieces from Iceland, Norway, Denmark and Sweden, collected a few centuries later, as well.

This is much to our benefit. Among the most enjoyable pieces are several varieties of polska, a lively traditional Swedish dance, such as Brudpolska av Jonas Böjesson (1799), a wedding march with a fine regal melody. We get a bouncy ballad, too: Valivan, from Norway, a lilting vocal work about a lovelorn knight and his daring adventures (sung by sopranos Hill and Michele DeBoer, tenor Cory Knight, and bass John Pepper.)

Much of this music, like most early medieval literature, was learned and passed down by ear anonymously within close-knit communities. Combining spoken word and music in one concert is therefore a natural fit, especially considering that storytelling often took place at celebratory gatherings, like wedding feasts, alongside music and dancing.

Those not used to the episodic structure of Norse literature might find little dramatic cohesion between the stories, while mythology buffs might flinch at the liberties taken in selecting and adapting the tales. But as a vehicle for linking a group of mysterious early musical works, the format is effective and highly entertaining. We are lifted up and hurtled through vast grey skies, deep fjords and frothy seas by a whirl of haunting, rarely-played repertoire.

The Toronto Consort launched Of Tricksters and Trolls on Early Music TV, their online on-demand video subscription service, on March 16, 2021.