In December 2020, nine months into the COVID-19 pandemic, Ontario was placed under lockdown for a second time, further limiting the already restrictive measures taken to control the spread of this virus. With firm (though somewhat inconsistent) restrictions making large-scale concert performances all but impossible, arts organizations across the city faced a demanding creative challenge—one that required equally creative responses.

On February 18, 2021, Toronto-based early music presenter Tafelmusik released Il Seicento, a virtual concert recorded at Jeanne Lamon Hall, featuring innovative music by trendsetting Italian composers from the 1600s. The concert title, “Il Seicento,” is a term that refers specifically to Italian history and culture during the 17th century, marking the end of the Renaissance movement in Italy and the beginning of the Counter-Reformation and the Baroque era. While many of these names will be unfamiliar to all but connoisseurs, a few, such as Giovanni Girolamo Kapsperger and Domenico Gabrielli, are recognizable as significant figures who straddled the Renaissance and Baroque eras, ushering in the new Baroque style and paving a way for the later generation, which included such household names as Corelli and Vivaldi.

Described by Tafelmusik music director Elisa Citterio as “a contrast between light and dark” inspired by the chiaroscuro of Caravaggio’s paintings, Il Seicento strives to bring light into a world that is currently shrouded in darkness, and it is strikingly successful in this regard. Indeed, with over a dozen individual works on the program, there are too many sublime moments to describe in such a brief review, but a few particularly remarkable instances deserve special mention.

The first selection in the concert, Maurizio Cazzati’s 1659 Capriccio sopra sette note, is so cheery and pleasant in its almost-obsessive repetition of the seven-note ground bass that it is both a pure delight to listen to and an impressive display of the individual and soloistic virtuosity of the performers. In contrast to Cazzati’s ebullience, Biagio Marini’s Passacalio à 4 is a stately and solemn exploration of the ground bass form, providing a beauty that, although different from the Capriccio, is no less satisfying.

Giovanni Maria Trabaci’s Gagliarda terza is a fascinating work, and perhaps most clearly outlines the shifting musical styles taking place in Italy in the early 17th century. Written in 1603, we hear a galliard, a form of Renaissance dance and music popular all over Europe in the 16th century, but with an increasingly complex harmonic and melodic lexicon that looks forward rather than backwards. 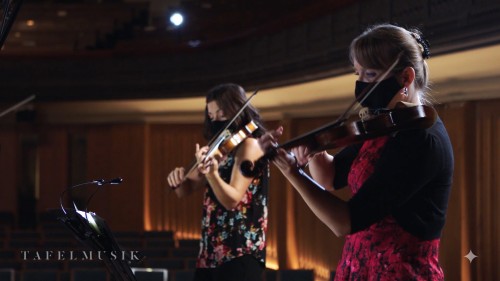 Taking in a virtual concert, whether on a cell phone, computer screen, or high-definition television, is a fundamentally different experience than attending a live concert. The use of cameras fixes our gaze, forcing us to look in a particular place at a particular time, and, for better or for worse, altering our perception of the performance. In the case of Il Seicento, the cameras take us on a guided tour of the ensemble, showcasing players at times when they emerge from the group, engage in dialogues, or enter after an extended rest, mirroring the scanning that an in-person audience member might do, led by their ears. This helpful method of videography enhances what we hear, because of how effectively it works with the music itself, rather than being purely decorative. (Worse is the single wide-angle shot often seen on concert videos that lasts the duration of the performance, which typically results in an ensemble of ant-sized individuals!)

With less than a year of exploration and experimentation to draw from, Tafelmusik is demonstrating that they are not only able to survive but thrive in this new and unexpected virtual environment. Il Seicento would be a terrific concert experience regardless of forum or venue, and the virtual format does not hinder its presentation. With such high-quality audio and video, it gives everyone the opportunity to have a front-row seat, even to walk amongst the performers themselves, and not be constricted by a far-away or obstructed view. Il Seicento provided much, both musically and technologically, to marvel at—and I encourage you to visit the Tafelmusik website to explore the other winter concert offerings they have in store.