Midway through his performance of “Una furtiva lagrima” from The Elixir of Love, Toronto tenor Asitha Tennekoon glanced behind him and smiled. In the trees above a makeshift stage, outside Ehatare Retirement Home in Scarborough, unseen birds sang along to Donizetti’s wistful aria, providing a welcome if off-beat accompaniment. This delightful moment was one of many throughout Tennekoon’s afternoon performance on Saturday, September 12, in an outdoor Box Concert jointly presented by Tapestry Opera and Soulpepper Theatre.

The two Toronto companies conceived the Box Concerts series as a response to COVID-19 and the cancellation of traditional performances, collaborating to bring live opera and classical favourites to communities around the Greater Toronto Area. Tennekoon and cellist Bryan Holt have each visited hospitals, retirement residences, and even some private homes, performing their repertoire from a “box” stage – a cleverly-designed flatbed trailer – all while maintaining a safe distance from their audience, some of whom don’t even have to leave the comfort of their rooms.

The Box Concerts offer easy access to live music for those in isolated communities who otherwise might not be able to travel to a traditional concert venue. There’s no price of admission, the setlist is only thirty minutes, and attendees can come and go as they like, making for a casual, relaxed experience. At Ehatare Retirement Home, residents enjoyed Tennekoon’s set of opera classics and musical favourites from chairs just outside their building’s front door. Thanks to this informal atmosphere, Tennekoon has been able to socialize with his audiences before and after shows, having conversations which wouldn’t be possible on a normal night at the opera.

Concertgoers have shared with him how particular songs remind them of lost loved ones, or simply how excited they are to be able to participate in the communal concert experience during this time of isolation. The physical intimacy of these outdoor shows means that Tennekoon is closer to his audiences than ever before. In broad daylight, he can see attendees mouthing the words to a classic showtune. Tennekoon says the most poignant reactions have come not from the Box Concerts’ intended audiences, but from passersby caught unawares – people out walking their dogs or going for a run who stop to listen. “A couple of times, those people who weren’t expecting to hear the live music stayed afterwards,” Tennekoon says. “One gentleman was in tears because he hadn’t realized how much he’d missed having live performances, until he was able to experience that.”

To my knowledge, no (visible) tears were shed at the performance I attended, but Tennekoon’s passionate delivery was certainly worthy of such a response. He opened the concert with a joyfully expressive rendition of “Il mio tesoro intanto” from Mozart’s Don Giovanni, smoothly gliding through the aria’s complicated coloratura passages. During both this aria and during Donizetti’s “Una furtiva lagrima”, I was impressed by Tennekoon’s dramatic presence and vigor, despite his being somewhat stuck behind the microphone stand – one disadvantage of the small Box Concert stage, and the necessity of creating audible acoustics in an unpredictable outdoor environment. 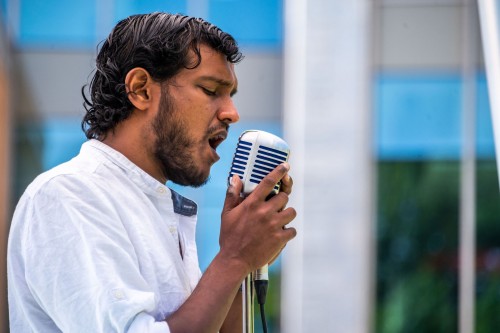 Tennekoon was equally confident with the musical theatre repertoire, following his opera selections with three well-loved showtunes. The romantic “Younger than Springtime,” from South Pacific, was especially fitting in the outdoor setting, and Tennekoon’s tender interpretation made the afternoon breeze of early fall feel slightly warmer. He next performed “Bring Him Home” from Les Misérables, mastering the song’s powerful dynamic shifts and finding beautiful suspension in the song’s iconic closing high note. The last selection of the afternoon was “Maria” from Leonard Bernstein’s West Side Story, and although Tennekoon’s delivery was solid, it was here I most noticed the Box Concert’s absence of live accompaniment. Tennekoon performed each song with a pre-recorded piano track, but the normally impassioned “Maria” felt sparse without Bernstein’s rich orchestrations.

Even with this limitation, the Box Concert I attended was a heartening success, with residents requesting an encore, and lingering after the performance to thank Tennekoon for bringing live music to their doorstep. The concert was a joyful half-hour escape into the world of musical storytelling via the human voice, an experience I’ve deeply missed over these past months. And although the pandemic inspired this series, I believe the Box Concerts have staying power as a new style of performance beyond COVID-19. Tapestry Opera and Soulpepper have demonstrated the possibilities for live music in easily accessible, outdoor public spaces, and I hope to see them continue this innovation in future.

Box Concerts, presented by Tapestry Opera and Soulpepper Theatre, will be performed at GTA hospitals, retirement and long-term care facilities, and private homes until October 1. For more information and to inquire about booking a private performance or donating a public performance to a community, visit https://tapestryopera.com/performances/box-concerts/.