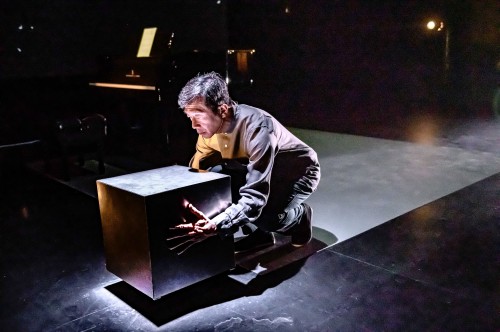 On the evening of May 17, I had the opportunity to experience the world premiere of Njo Kong Kie's new one-man show, I Swallowed a Moon Made of Iron. I had been expecting a show of larger scale, as had been suggested by pre-season publicity last spring when Kong Kie's earlier work Picnic in the Cemetery made its Canadian premiere in the same space (Canadian Stage's Berkeley Street Upstairs Theatre). However, this is a good space for intimate shows, as the furthest away you can be as an audience member from the stage is 6 or 7 rows—and I Swallowed A Moon Made of Iron is an even more intimate and personal creation than the earlier piece.

The enigmatic title comes from the source material, which, perhaps counterintuitively, is not of a  whimsical fairy-tale nature but the opposite: a collection of almost 200 poems by factory worker Xu Lizhi, detailing the soul-destroying reality for many young workers on the assembly lines at the giant Foxconn manufacturing plant in southern China, where many of the world's cell phones and other personal electronics are made.

Although he had started to gain some recognition for his literary gifts, Xu Lizhi jumped to his death on the last day of September 2014, when he had just turned 24. He was not the only worker to take this way out of a life he felt was destroying his humanity, and a group of his friends collected his poems and published them as widely as they could to not only celebrate their friend but to open the eyes of the world to the inhumane working conditions at the plant.

Journalists around the world reported the story at the time. Apparently conditions at the plant have since improved somewhat—but the poems continue to circulate, and a growing number of theatre artists have been inspired by the simple poetic power of Xu Lizhi's words, creating new works of music, movement, and design to make more of us aware of the human cost of gadgets we take for granted.

This February 2019 at Toronto's Factory Theatre (in a co-presentation by fu-GEN Theatre and the Music Gallery), Remy Siu's Hong Kong Exiles presented Foxconn Frequency No. 3. Taking Xu Lizhi’s poems as a starting point, they created a futuristic theatrical event where three pianists competed in what has been described as a “kind of randomized real-time video game” involving three keyboards connected to computers and 3D printers, with webcams adding live footage of the performers' efforts as they compete. Each performance was different depending on the real-time results of the “game.”

While I didn't have the opportunity to see this show live, I have seen excerpts online and read many accounts of the disconcerting effect on the audience of the (thematically simulated) inhumane pressure placed on the three “worker/competitors” as they attempt to keep up with the demands of the “game.” The performance seems to have been a fascinating recreation of the factory life depicted in the poems, also functioning as a warning to the audience of the human pressures of our product-hungry modern world. 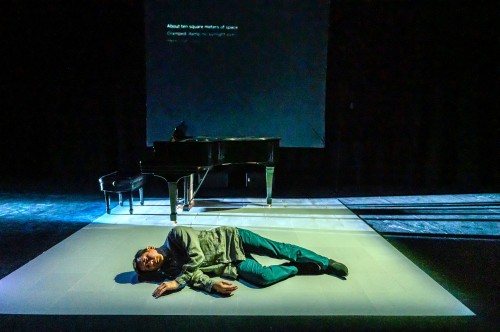 Kong Kie's creation is very different. In contrast, it could be seen as almost old-fashioned in its simplicity. Onstage is a grand piano on a highlighted square of floor, with a screen behind the piano on which the poems and various images are projected. A man (Kong Kie) enters and walks around the square marked on the stage, miming what seems to be a feeling of being constricted by his living and working space. After a while he sits down at the piano and begins to play.

There are several interludes in the 60 minutes of this theatrical concert, where Kong Kie performs other passages of mime, some seemingly-literal depictions of claustrophobia, others more symbolic, such as moving an anonymous cube from the floor to the piano, or raising it into the air with a pulley. These passages help to create a contextual world for the poems, feelingly spoken by Kong Kie in their original Chinese while English translations are projected on the screen behind. The performer's voice is rich and moving without being overly dramatic, and the impact of the poem's words is often enhanced by being spoken first before a blank screen, with a translation only being projected afterwards alongside the music.

The great richness of this theatrical concert is the power of the music, which varies from simple melodies to richly dramatic harmonies to clashing jangles, depending on the poem. Where it fell down for me was in the lack of a strong enough dramatic arc for the performance. The suicide to come at the end, I felt, was too clearly foreshadowed at the beginning, and the middle sequence was too often mired in shapeless melancholy.

In spite of this, the show is an intriguing introduction to the poems and world of Xu Lizhi, and a moving personal response to those poems by a musical artist of great experience and power. Kong Kie was for many years the music director for dance company La La La Human Steps, and many of his compositions here have a plasticity and dramatic tangibility that cry out to be interpreted by dancers. In many ways this felt like a first personal draft of something that may, in the future, grow into a larger work of music and theatre.

Njo Kong Kie’s I Swallowed a Moon Made of Iron was presented from May 17 to 26 by Canadian Stage, at the Berkeley Street Upstairs Theatre, Toronto. 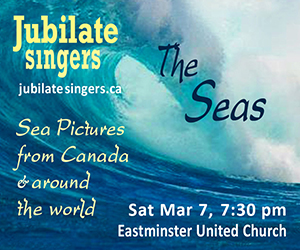