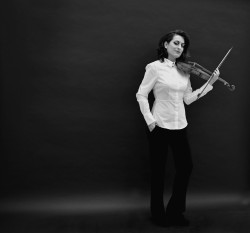 The Tafelmusik Baroque Orchestra closed its season Sunday afternoon with Beethoven on period instruments. It was the fourth iteration of this bill and nearly filled the 1,100-seat Koerner Hall. The program was guest-conducted by Bruno Weil, a distinguished German musician with a well-deserved reputation as a probing interpreter of Viennese classics.

Jeanne Lamon, music director from 1981 to 2014, ceded that title to Elisa Citterio from Italy, who joined the orchestra at the start of this season. On Sunday, Lamon was back as guest concertmaster, so that Citterio could play the Beethoven Violin Concerto: the Mount Everest of violin concertos, and not a work one usually associates with period instruments.

Every classical music lover knows the Beethoven Violin Concerto, but few know the work in a sound the composer himself would have recognized. Citterio and Weil applied themselves to the lofty rhetoric with spirit and without inhibition or apology. Citterio in particular added an indefinable element of soul and serenity that lifted her performance well above the realm of hidebound “authentic” recreation. From her first entry, she revealed a vital engagement with the music that was anything but dry, thanks to her temperament. In the lengthy opening movement (which never sounded long) she scanned the soaring phrases with sensitivity to harmonic underpinnings, and resisted lapsing into mechanical recitation.

The sound of the timpani (kettledrum) a crucial structural element, had a zesty “bite” to it. Cadenzas were not the customary ones by Fritz Kreisler, but composed by Carlo Citterio, Elisa's brother. The siblings collaborated to adapt the cadenzas to her own ideas. (The one for the Finale was just a bit long.)

Tempos were brisker than usual, as Weil cultivated heightened clarity and transparency of inner parts while faithfully tracing the drama. In Beethoven’s “Pastoral” Symphony No. 6, which ended the program, the vernal score sounded freshly-minted, especially the outer movements. Weil conducted the opening stanza almost as a sequence of upbeats, the pungent woodwinds springing to life. The “Awakening of joyous feelings upon arrival in the countryside” was actually joyous, not too heavy.

Though the three middle movements didn't scale the same heights, the Finale again showed Weil as a fount of rhythmic and stylistic energy, a musician to his fingertips. Meanwhile, the Tafelmusik orchestra gave every indication that it likes (even loves) what it does. As it gets set to embark soon on a three-week tour to Australia, one can only wish that its spirit will persist – alongside the relationships with Elisa Citterio and distinguished guest conductors such as Bruno Weil.