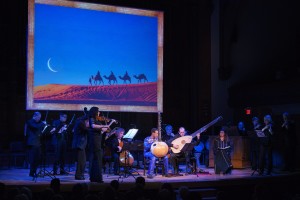 Immigration and the status of refugees continues to be a global issue. Whether through the discourse and dissent on the fate of “Dreamers” on our own continent or the mass displacement of tens of thousands due to climate change, war and societal unrest around the globe, refugee-related concerns continue to receive increasing attention from media, politicians and the public as a whole.

A fundamental element of immigration debates, particularly in North America, centres on how our individual and massed views of outliers – our understanding of the foreigner – are often based on incorrect and stereotypical perceptions of how those different than ourselves will impact the social structures around us. We hear how immigrants will “steal jobs,” infiltrate our cities, poison the minds of our youths with “radical agendas,” and pose a threat to the very fabric of a democratic society which we have treasured since the Great Philosophers.

These arguments, presented everywhere from internationally-televised political speeches to private dinnertime conversations, are not new; many of these anti-immigration rationales have been used, in some form, for centuries. Running January 18 to 23, 2018 in Toronto, Safe Haven – Tafelmusik’s latest multimedia concert and the brainchild of bassist Alison Mackay – countered these age-old prejudices, exploring the overwhelmingly positive influence of refugee populations on their adopted cultures over the past four centuries. Working with guest performers Maryem Tollar (narration/vocals), Diely Mori Tounkara (kora) and Naghmeh Farahmand (percussion) to create a unified multimedia presentation incorporating music, words and projected images, Tafelmusik revealed how several significant developments in the Baroque era were the result of immigrant-based cultural collaborations.

Beginning with religious refugees from France fleeing Louis XIV’s revoking of the Edict of Nantes, Safe Haven first focused on the influence of the Huguenots, French Calvinist Protestants, on the rest of Europe. These refugees were welcomed by many, but others were concerned about the influx of these strange people, citing their religious beliefs, strange language and unusual headdresses as reasons why the entry of Huguenots should be prevented.

Weaving a thread through the music of Vivaldi, Lully, Goudimel and Purcell, we saw the influence of the French carried to Italy and England, intellectual exchanges resulting in the dissemination of Lully’s operas and suites, and the adaptation of these dance forms by Italian composers. By highlighting the influence of the French on German musicians, particularly through the introduction of the oboe (hautbois), we learned why J.S. Bach was so enamoured with the instrument and its rich, novel sound. Bach also utilized French suite forms in his compositions, writing works of astounding complexity and inventiveness and arguably stretching the style to its limit through works such as the Six Suites for solo cello.

Another significant Huguenot emigré featured in Safe Haven was the Amsterdam-based publisher Éstienne Roger. Beginning his trade by producing grammars and dictionaries, Roger started engraving music in 1696; by 1722 Roger had published over 500 editions of works by composers like Corelli, Albinoni and Vivaldi – a musical superconnector whose craft resulted in widespread distribution of these composers’ works.

Other notable religio-political conflicts which resulted in social diasporas and subsequent musical developments include the 17th-century expulsion of Jews from Spain and Portugal to the Netherlands and Poland, as well as the outlawing of Catholicism in England by Elizabeth I. Poland, with its Warsaw Federation Act guaranteeing freedom of worship to all, became a cultural melting pot, a contact hub for Jews, Catholics and Roma that influenced numerous composers – including Telemann, who transcribed a number of Roma melodies and later used them in his orchestral compositions.

From a musical perspective, the standard of Tafelmusik’s performance was particularly impressive, especially given the changing stylistic elements throughout. Placing concerti by Vivaldi and Corelli cheek-to-cheek with a Lully suite or Bach oboe obbligato cantata movement requires immediate yet subtle changes in approach, and the orchestra’s fluency and expertise in all styles was on full display. The blended use of smaller chamber works and larger concerti to highlight instruments and their combinations was very effective: Elisa Citterio’s Winter solos glittered; Charlotte Nediger’s Sweelinck was subtle and sublime; and Marco Cera’s oboe lines sung in Bach’s Sinfonia from Cantata 156. 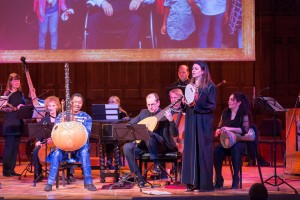 One performer that cannot go unmentioned is kora player Diely Mori Tounkara, a native of Mali and resident of Montreal. Tounkara’s virtuosity and musicality added another dimension to this performance, most notably with his first solo, mesmerizing everyone in Jeanne Lamon Hall with his total immersion in the music and his instrument. The kora, a plucked instrument that resembles an upright lute (it’s actually a hide-covered calabash with a neck and 21 strings) flourished within the Mali bardic tradition, and its inclusion in Safe Haven presented a fascinating cross-cultural collaboration that was likely a new and novel sound experience for many in the audience.

A highly effective and tightly-woven tapestry of words, music and art, Safe Haven used all three forms of media in such a way that the entirety was far greater than the sum of the individual parts. Removing one component would have caused the whole to unravel, like the pulling of a thread: without the words, the musical selections would be decontextualized, disconnected, and discombobulating; without the music, we would have a dramatic lecture; without the images, another entire layer of contextualization and visual engagement would be lost. It is new and innovative presentations such as Safe Haven that help us appreciate what a wonderful culture and community we live in – one where creative, experimental and profound concepts and ideas can be realized onstage, to the benefit of all.