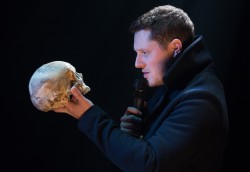 I wasn’t sure what to expect after the interview I did with Richard Rose on the Tarragon Theatre’s production of Hamlet for the December/January issue of The WholeNote. How much music would there be and how many songs? Even the director wasn’t sure at that point as, although there had been a preliminary exploratory workshop of the idea, he didn't know how or in which direction the show would grow once in full rehearsal.

As it turns out, it is much closer to a traditional Shakespeare play than I expected. Rather than a rock musical, it is much more what the director described: “a radio play meets a rock concert,” yet it is staged, not on a traditional set but on a narrow strip of stage in front of the “band setup.” For furniture: simple chairs with some basic props, memorably the rapiers and daggers for the  excellent slow motion duel at the end.

The script is totally Shakespeare’s Hamlet, pared down nicely to the essential with particularly good cutting in the second half when Hamlet comes back from England and Laertes from France, including a cleverly succinct staged scene of Hamlet on shipboard switching the letter carried by Rosencrantz and Guildenstern, speaking the words he writes to Horatio.

The rock music underscoring mostly makes the story clearer, underpinning emotions, freeing the actors to surf and soar on and over the music and letting the words take flight. Microphones took away the need to project, so the words could be spoken in whispers when necessary in great intimacy – or shouted – all reaching the back of the theatre.

This was particularly true of the “Rogue and Peasant Slave” soliloquy, where Hamlet berates himself for his inability to revenge his father after watching the passionate performance of the First Player (the commanding Jack Nicholson) in the previous scene. The passion, anger and black humour of Hamlet’s soliloquy was fully realized by the excellent Noah Reid, with music building to a point where it felt like he almost might burst into song.

Unfortunately, the scoring doesn’t always work that well. After the magnificence and complete understanding of this sequence, the more famous soliloquy, “To Be or Not to Be,” falls flat, too quiet, too little music, and not enough urgency. The same can be said for the characters’ music themes, which sometimes worked well, but at other times – as in the church organ accompaniment created for Cliff Saunders' Polonius (to highlight his sententious sermonizing) – got in the way of the performance. 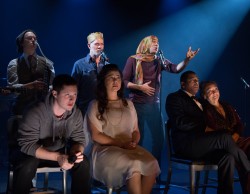 Even though not always perfect, what was effective was the constant presence of the music throughout the show – music all composed, arranged and played live by the incredibly versatile ensemble. Other highlights included a wonderfully eerie atmospheric soundscape for the ghost, and an effective mini rock-opera for the “play within the play,” Beau Dixon standing out as both demure Player Queen and Judas-style rock and roll murderer.

Part of the fun of the production is watching the performers’ smooth transitions from character to musician and back again, almost as if a rock band had decided to put on Hamlet. Even Hamlet plays the keyboard in his first appearance. Laertes is glued to his guitar until he returns to Denmark to find his sister has gone mad, and Rachel Cairns as Rosencrantz is a great find, easily switching from playing various instruments to embodying Hamlet’s old school friend, with her mobile speaking face and great physicality. At the same time, more could have been done with the idea of Ophelia’s songs beginning as sweet love tunes at the beginning. I had expected them to appear much more strange and haunting in the mad scenes, given Tiffany Ayalik’s experience as a throat singer and vocoder player. It was also a pity that Gertrude and Claudius were not involved in the music-making at all, although Claudius (Nigel Shawn Williams) did effectively command the band to play and stop during the court scenes.

Opening night was an exciting high energy performance and the younger people in the audience were particularly thrilled (though some of the older were not). The original concept of director Richard Rose and music director Thomas Ryder Payne of Hamlet’s rage finding a voice through rock music is fulfilled to a great extent. In many ways this production made me think of Neil Munroe’s controversial Hamlet’s Room back in the 1990s at Theatre Plus: radical experimenting with a well-known classic, bringing it into our times to make a Hamlet for today.