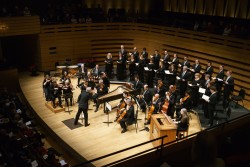 Every year in mid-December, audiences gather at churches and concert halls throughout North America to hear performances of Handel’s Messiah, the 1741 masterpiece that, although written for Lent, has become synonymous with the Christmas season. First performed in Toronto in December 1857, it was also the first work performed in Massey Hall when it opened in 1894, with hundreds of singers and players and thousands of attendees.

Given the tremendous number of performances offered to modern audiences, it is not uncommon to find truncated and modified interpretations of Handel’s oratorio, often billed as the “Christmas portion” or the “Easter portion,” with the occasional hodgepodge medley of movements thrown in (hello, “Hallelujah” chorus!). As you may have noticed in The WholeNote’s 2017 Messiah preview, there are also a number of ‘outside the box’ interpretations taking place this year, from arias-only concerts to electronic mashups, ensuring that every type of listener has access to Handel’s music, even if only in part.

Despite the temptation to go window shopping through these myriad options, there is something profoundly satisfying about hearing Messiah in its entirety, performed in its unabridged, three-hour original form. Tafelmusik does this every year in what is now an annual tradition, culminating in their sing-along Messiah led by Herr Handel (a costumed and in-character Ivars Taurins) himself, a massive (and massively fun) concert that gives choral aficionados from across Toronto the opportunity to be a part of the action.

An old adage says that “absence makes the heart grow fonder,” and Tafelmusik’s Wednesday performance of Messiah, led by Ivars Taurins, proved that to be true. A number of years have passed since I went to a live concert of Handel’s oratorio, in which time I had the privilege to study Historically Informed Performance and work with a number of renowned experts in the field. My early music brain, much like the Grinch’s heart, has grown three sizes since my first Messiah concert, and this return to the work as a concert piece was one of the highlights of my musical year.

From the opening orchestral chords to the closing Amen, Taurins’ interpretation, much like his style of leadership, was light, agile and energetic. The Sinfonia, a relatively brief French overture, was delightfully precise, and the relatively quick tempi taken throughout the entire oratorio ensured that there was dramatic continuity and musical flow from beginning to end. The dance-inspired forms which dominate Baroque music shone through, the essential gestures so well-articulated that I could see every slur, bow mark, and over-dotted note in my mind’s eye, a remarkable feat of focus and endurance on the part of the performers that brought every note to life. Pauses between movements were kept to a minimum: the opening chord of a recitative and aria immediately followed the conclusion of a chorus, the next chorus following closely behind, which not only maintained the narrative flow of Messiah but prevented the concert from extending into its fourth hour.

If Taurins’ conception of Messiah, with its obsessively worked-out details and sheer velocity, increased the demands on performers, it was not noticeable that evening. Soloists, chorus and orchestra met the challenge head-on, not once sounding insecure or uncertain. Indeed, the majority of those onstage have played and sung Messiah many times before, their expertise adding a level of surety and confidence that was not lost on this listener. Melismatic passages flew through the air with fleetness, fugal textures were clearly audible, and every musical aspect implied in the score was manifested in marvelous sound.

Within this overall standard of excellence, a few moments deserve special mention, the first being the on-the-spot adaptations made by the singers to accommodate ailing countertenor soloist James Laing who, being ill, was ‘replaced’ in multiple places. Soprano soloist Joanne Lunn sung the entirety of “He shall feed His flock,” thereby turning the soprano/alto duet into a range-testing solo, and choral countertenor Simon Honeyman saved the day by taking over for the magnificent alto/tenor duet “O death, where is thy sting?” Despite these impromptu adaptations (one of the perils of live performance!) the level of musicality was uncompromisingly high. The other (less nail-biting) highlights included what might be the best “Rejoice greatly” I’ve heard, a roof-raising “The trumpet shall sound” sung by baritone Brett Polegato, and an “And He shall purify” that showcased the Tafelmusik Chamber Choir at its finest, the challenging melismatic passages dashed off with apparent ease. (Of course, the “Hallelujah” chorus was expertly done as well, the audience standing at attention, some smiling at their immediate recognition of this famed moment in the context of its much larger whole.)

Regardless of whether you prefer your Messiah in whole or in part, performed in historical style, arranged in electronic modernity, or sung as in the “good old days” by a massive choir and orchestra, I encourage you to take time this year to explore this grand oratorio. Handel’s score is uncompromisingly delightful from beginning to end and we are fortunate to have ensembles such as Tafelmusik here in Toronto, consistently delivering delightful and excellent interpretations. It is rare to hear a live performance that is virtually flawless from beginning to end, much less when it involves three hours of constantly-changing music, but that is what we were treated to on Wednesday night – a marvelously nuanced overview of a quintessential Baroque masterpiece.