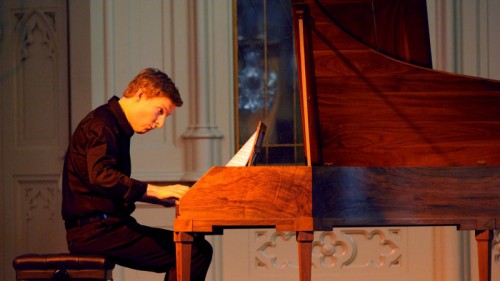 Warm greetings from across the globe! I am wrapping up my time-travels here in Canada and find myself in a city called Toronto, in the province of Ontario – it’s quite cold for November, but the town is delightful, and my stay has been nothing if not pleasant. This place is altogether incredible; there are enormous buildings, all of them new, great and majestic churches, and millions of people living in this one municipality!

Do you remember our old colleague who built you that piano a while back? (Not Schantz, I know you didn’t like his instruments very much, even though Herr Haydn thought otherwise!) I mean Herr Gabriel Anton Walter, of course. Well, you won’t believe what I discovered this week – a virtual replica of one of his own instruments here, 7,000 millaires away from our beloved Austria! Apparently, the Canadians copied his design almost exactly with this particular piano, which is housed by the University here. [Ed: the fortepiano used for this performance was built by Virginia-based builders Thomas and Barbara Wolf in 1997 and maintained by Barbara Wolf for the duration of these concerts.]

I found and heard this piano in a beautiful old church, named after the Holy Trinity and St. Paul, and it was played in the most remarkable way by Herr Kristian Bezuidenhout, a fellow European (by way of the Dutch colonies, but that is another story) from London, England. The instrument was mellow and warm, beautiful in appearance and tone, a little auditory snapshot of our homeland here in this wondrously wintry metropolis. [Ed: The ‘Mozart’s Piano’ concerts, presented by Tafelmusik, took place at Trinity-St. Paul’s Centre in Jeanne Lamon Hall, from November 9 to 12, 2017.]

You will be delighted to know, dear Mozart, that Herr Bezuidenhout was accompanied by Toronto’s own Tafelmusik orchestra and together they played an entire concert of our Austrian and German music. They included one of your ‘Viennese’ symphonies, a piano concerto (from those Lenten concerts you gave in Vienna a while back) and your rondo – the one in A minor – as well as two symphonies written by our old colleagues Johann Christian Bach (also from London!) and Carl Philipp Emanuel Bach. It was terrific to hear their music again; apparently Tafelmusik obtained their performing parts for Carl Philipp Emanuel’s little work from across the continent – on loan from a library in California – part of the United States, the country immediately south of Canada. How wonderful it is that our little tunes are now being discovered and played across the world!

Herr Bezuidenhout is a striking figure, immensely poised and possessing quite the aura onstage, and he led the group with a vigour that rivals our young Beethoven. (His hair is considerably more restrained, though, and his wardrobe much nicer!) He played with love and passion, and I would be hard-pressed to find a single flaw with his leadership, technique, or performance. His interpretation of your Rondo would bring you particular joy, for he imbued it with freedom and sensuality (but always tastefully) – and your concerto was played the fastest I’ve ever heard it! Even the Emperor himself would have risen from his seat in excitement at the end of it.

The hall was packed to the rafters (I was in the balcony and almost didn’t get a seat – they sell tickets to their concerts here!) and people were most approving of your music – it received three rounds of applause at the end of the evening. All in all, the concert was performed in a way that expressed both the simple joys of your music and the complexity of your ideas, always balanced, nuanced, and, I dare say, virtuosic enough that one might think the players were fellow Austrians! On the whole, my dear Mozart, they did a fine job of bringing our music to life and I think you would be immensely pleased with the results.

I return to Austria soon, with some regret, but I must get back and resume my work at the publishing house where we will soon print Herr Haydn’s last collection of string quartets.

Give my warmest regards to your sister, your lovely wife and child, and all those whom I have sorely missed while on my journeys. I look forward to reuniting with you all upon my return. Until then I remain

Your faithful and true friend,

*Artaria & Co. was founded as a publishing house for art and maps by Carlo Artaria (1747–1808) in 1770 in Vienna, then the capital of the Habsburg Monarchy. The company expanded its business to include music in 1778. Its most important early collaboration was with the Austrian composer Joseph Haydn, who published more than 300 works through Artaria, including many of the composer's string quartets (such as the Opus 33), which were a popular seller. The value of Haydn's works helped push Artaria to the top of the music publishing world in the late 18th century. This important relationship helped Artaria secure the rights to the works of other important classical composers such as Luigi Boccherini and, most notably, Wolfgang Amadeus Mozart. -Wikipedia