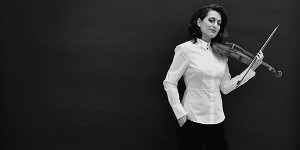 Tafelmusik, Toronto’s best-known period performance ensemble, played the first concert of their new season from September 21-24 at Koerner Hall. The program included concerti by Handel, Corelli and Vivaldi and a suite by Rameau, all led by their new music director, Elisa Citterio. The playing was incredible throughout, but I also experienced an unexpected revelation during the show: rather than seeing the performance as merely a gathering of musicians onstage, stuck in a static, determined and immovable formation (pairs of players sharing a music stand, ancient in its acoustically optimal strategies), I became aware of the subtle physical communications that took place between the orchestral players as they moved through the music. It occurred to me that they were dancing as well as playing, not just as individuals but also as a group, realizing the innately dance-based structures of the composers’ works through their bodies as well as their violins, violas, bassoons and flutes. They were, in essence, dancing a tango for us there onstage.

The orchestra is onstage, dancing a tango; the leader is moving her hips, arms, legs, head, torso, clavicles heading the charge. Everything is vital and exciting but always in control, and the players behind her are feeding off her energy. Smiles are traded back and forth between players; the violinists smirk and wink and giggle (one misses the occasional entry, he’s having so much fun! He always recovers admirably.)

Everyone onstage is dressed in black, or close enough. A violinist downstage left, sparkling in a silvery, glittery dress, bops to the music like a go-go dancer on roller blades while cellists play solos like Dizzy Gillespie, riffing like Hendrix, fingers flying like Jimmy Page. A cadenza is improvised and for a moment the sounds of the prescribed, notated music on the page are overtaken by the vibe of an impromptu jam session. You forget that you’re in one of the city’s finest concert halls and get taken to that place all performers remember as the purest form of the art, spontaneous and free extemporization, that place where things happen that can never be repeated, although this performance has been and will be repeated throughout the week.

Bassoons look like saxophones boxing as they bob and weave, taking the bass line then the melody, oboes and violins and horns trading solos – a great feeling, a great vibe (and this is only the beginning!) and it seems for a brief moment like you’re the only one in the hall.

But you’re not. The man in the row behind seems unaware that he is whispering, more than audibly, throughout the concert:

And, once a movement or work is over,

He whispers with delight at a skillfully executed cadenza or flourish even when others in the crowd look bored. Listening attentively takes a lot of different forms.

At intermission there’s a reception for the younger crowd (hosted by Tafelscene, the under-35 club that has intermission parties at certain shows throughout the year) in a bustling cordoned-off area with free beer and wine. Everyone seems to know each other, breaking into cliques and groups like a high school reunion or an office lunch break around an alcoholic water cooler, and it’s good to see so much support from and for a younger demographic, still underrepresented in the classical world. Some of the performers step out onto the mezzanine and mingle with these young concertgoers, exchanging looks and smiles and conversation, welcoming them and encouraging them in their exploration of this ancient music and its age-defying wonders.

Later in the evening the final suite jives along, lively and sprightly and ebullient, vivid in its characterization. You can imagine the first performance in 1763 Paris: powdered wigs, ridiculously voluminous gowns, collars, gold and palatial scenery as the gentry dance and the performers perform.

The drummer hammers a beat and the players stomp through the Airs gay:

The string players’ fingers move frantically but uniformly, choreographically, on their fingerboards as the Contredanses sprint past our ears – if they had ribbons, the bows would look like gymnastic wands:

As the last notes are played, the audience stands in rapture:

Onstage these masterful musicians possess dual powers – part black-collar courtiers playing the baroque folk’s jazz, entertainers like Counts Basie, Bernstein, Brubeck and Barenboim – part mythical gatekeepers, opening our ears and minds to the wonders of the past. Where else can someone with no everyday musical, artistic, or spiritual knowledge suddenly become enlightened by and immersed in previously unknown cultural wonders? Such is the beauty of this music, a time capsule opened before our eyes and ears. For two short hours that Saturday night all sense of the present was lost, overwhelmed by the energy put out by that group of dancers that took us all for a ride through some of the great songs of long ago, and we are the better for it.