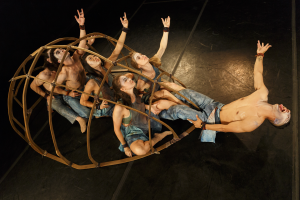 My earliest memories of Fort York are of spending Saturday mornings when I was about ten years old learning how to make musket balls and apple pie, how to fire cannons and plan fortifications. How magical then to see how, in last weekend’s new music theatre production Miigis by Red Sky Performance, the Fort was overtaken by Indigenous dancers and musicians reclaiming the space and adding to its history – and making it that much richer in the process.

Artistic director of Red Sky Performance, Sandra Laronde, spoke about this juxtaposition in her introduction to the evening: how disconcerting at first and then how ironic it was for the company to be rehearsing in Fort York's Blue Barracks to the frequent sound of cannon fire, and surrounded by young people in the uniform of British soldiers during the war of 1812, but how as they listened to an elder retell in this setting the epic story of the movement of the Anishinaabe peoples from the sea to freshwater – the mythic prophetic history known as the seven fires prophecy – it became an increasingly positive merging of energies, a reclamation of Haudenosaunee (Toronto) “where trees grow in the water,” and a strong message of hope.

When I talked with Sandra Laronde back in August she spoke passionately about wanting to immerse audiences in nature while sharing with them this story. I was attracted by her passion for the project and was curious to see how it would manifest in the physical production of Miigis. How much of this story would be tangibly conveyed by the choreography? How much would it be storytelling and how much a more abstract reflection of the story and prophecy and the emotions that arise from it?

For me it felt to be a fascinating combination of the tangible with the evocative, with some elements of literal storytelling but other, more abstract depictions of an epic journey. 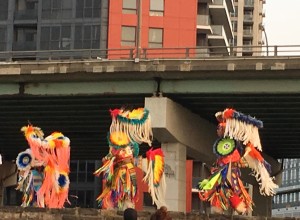 The opening movement, where male and female traditional dancers in full regalia made their way along the southern barrier wall of Fort York into the stage space (to recorded music), set the tone for Indigenous peoples’ reclamation of the land and acted as a cleansing of the palate (from urban Toronto) before the magic of the Indigenous-influenced contemporary dance and music of Miigis began.

Truly it did feel magical. In a natural historical oasis, against a stunning urban backdrop, six supremely fit contemporary dancers, dressed in flowing water-like silk costumes designed by Julia Tribe, led by choreographer and soloist Jera Wolfe, focused their condensed forces of energy and emotion to carry us on a journey of creation, travel, challenge and hope.

To a powerful, varied, original score played live from the side of the stage, the story began with hands and arms emerging sinuously from under the bare skeleton framework of a miigis (cowrie) shell – as if the people were being born, then flowing out of the shell onto the earth. Next the shell became a boat, a coracle shell to carry them from the sea to the first of the prophesied Promised Lands marked by miigis, the symbolism of shell, boat and prophecy intermingling.

The choreography then became more abstract. In solos, duos, trios, and movements for the full ensemble, the story of a journey unfolded – one that began with great hope but that was also filled with struggle, hard work and challenges. All of it was choreographed in a unique language combining Indigenous movement with non-Indigenous contemporary dance, creating a new vocabulary that felt specially invented for this work and subject matter.

I wish I could play back the full piece to capture again all the intricate detail. I am sure I missed some references more clear to the Indigenous members of the audience, and I couldn’t anchor all the movements to specific points in the epic story, but I did feel carried along on the journey. 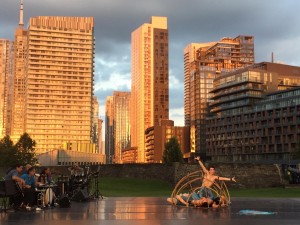 What was very clear toward the end was seeing the dance enter the territory of the eighth prophecy, where a choice is laid before mankind to choose either the path of working with the natural world or against it. Emerging from the hard work and harsh challenges of the earlier stages, the dancers’ movement grew more lyrical, with one female dancer, raised up by the others, reaching out to humanity to join her in hope for the future – and suddenly the accompanying song was in both Indigenous languages and English, opening up to let me more fully into the story, and all around me I could sense the audience feeling energized and inspired by the experience.

What would have made this experience even stronger would have been the opportunity to have access to that same moment the creative team had at the beginning of their rehearsal process, of hearing a community elder tell the stories before watching them come to life. Perhaps another time, at a future performance, this might happen. The eighth of the seven fire prophecies really speaks to all peoples as well as the First Nations of North America.

Sandra Laronde has been called “a force to be reckoned with.” She is a force we are lucky to have if she can keep creating works like this that bring people together.

Music theatre production Miigis, created by Red Sky Performance, was premiered in Toronto at Fort York, on September 15 and 16, 2017.