come early
make sure you get a seat
they say

so i do
there’s no one else here

i sit
and wait
and drink

Two beer, two bourbon – I’m half drunk and the show hasn’t even started yet, but nothing sobers you up faster than Bach.

I’m in the Dakota Tavern, a subterranean bluegrass temple, icons of Willie Nelson and Jim Cuddy on the walls, lit dimly by hanging bulbs, their haze interrupted occasionally by blasts of light as the front door opens at the top of the stairwell. The bar is well-stocked, the stage empty except for a honky-tonk piano against the wall and a chair in the centre, in which our entertainer will sit momentarily.

It’s a small venue, seating 40 or so, but most of the seats are full and, although not a bluegrass crowd (more than half the people are baby boomers with their families), there’s an energy in the air. There are some young adults here, in their mid-twenties to early thirties from the looks of them.

There is no program to be found, no performer biography or souvenir shop, just a menu with three items on it: tacos, baked beans, and nachos. I like the minimalism and appreciate it as a conscious departure from our art music norms. Maybe it’s just cheaper, but I’m feeling decidedly anti-establishment this evening, drunk on beer and culture.

At 7:15 the show starts, and Toronto Symphony Orchestra cellist Roberta Janzen takes the stage. She’s nervous and slightly gauche, plucked from her usual gaggle of celli and put on solo display in this musical exposé. (Theatrical people talk about the fourth wall, but for solo musicians it’s a more cage-like experience, I think, like tigers at the zoo.)

She introduces the first piece, Bach’s Cello Suite No.5 in C minor. Maybe I’m imagining it, but there’s an increased sense of reverence within the audience once Bach’s name is mentioned, like the naming of a great religious figure or pagan deity. 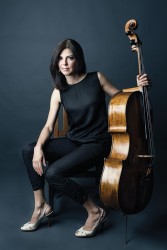 The suite is comprised of seven movements: Overture, Allemande, Courante, Sarabande, two Gavottes, and a Gigue. Janzen plays on a modern cello, which suits the venue and fills the space with its rich, warm tone. Her overture is sharp, slow, and stately, the following fugue contoured and, although fast and demanding, always controlled. The allemande, courante, and gavottes are well played, too. Bach’s writing for cello is so rich and complex, it’s often a challenge to identify the intrinsic characteristics of each dance – I know they’re there, but I sometimes can’t find the forest through the trees. The gigue, however, is unmistakable, resplendent in its minor-key exuberance.

Everything changes with the Sarabande, described by Rostropovich as “the essence of Bach’s genius.” Here, Bach creates a beautiful, angular line that, although only one voice, cries out with the sound of many. I immediately think of the warworn works of Eastern composers, Schnittke and Ustvolskaya, even Shostakovich. Whether she knows it or not, Janzen has given us a taste of what is to follow in the savagely delightful, delightfully savage music of Zoltan Kodály.

Kodály’s Sonata is an undeniably Classical work in its form, three movements (fast - slow - fast) beautiful in their lyricism, yet feral and untamable in their vagrant tonality. Janzen plays from memory, ties her hair back between the first and second movements (oh, the wailing of the Adagio, yearning and lamenting and screeching from the depths of the instrument’s soul!), takes a deep gasp of air before the third, an incessantly vigorous folk dance.

i am sitting close enough that i can hear her breathe as she plays
her thoughts as she labours for the silent audience
feel the friction of horsehair and rosin on gut and steel.

The applause at the end feels restrained and insufficient, and I think we should be dancing a wild pagan dance, rioting in our excitement like that first Rite of Spring audience, but we are a civilized people – two curtain calls will suffice.

why are we not more moved by our art
where are the mosh pits of western art music?

Outside the bar is the bus stop, a dirty, crud-filled street corner where hipsters muddle about, oblivious to the magic that has taken place in the nearby basement. As I stagger home on the bus and subway, I know I’m not the same as I was an hour before – I look the same, feel the same – but a transaction has taken place.

All art is a transaction, if done properly, as people come together with their own thoughts and feelings (baggage, therapists call it) and wring themselves out, filtering themselves through the sieve of the composer’s and performer’s offerings, giving something up and taking away something new.

art won’t change the world
but it can change a person –
and maybe that’s enough.

Presented as part of ClassyAF’s September lineup, cellist Roberta Janzen performed at the Dakota Tavern in Toronto on September 13, 2017.