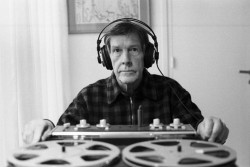 “Music is an act of aspiration,” claimed historical novelist Rose Tremain (Music and Silence, The Gustav Sonata) in her Writers & Company (June 4, 2017) CBC radio interview. And aspiration was also at the top of American iconoclast composer John Cage’s list of research topics when he set to work on his CBC commission for a work, in Cage’s words, to “observe the bicentennial of the United States of America.”

The composer tells us in his pre-recorded, self-narrated Preface to Lecture on the Weather (1975), played back before each performance, that the  “first thing I thought of doing in relation to this work was to find an anthology of American aspirational thought and subject it to chance operations.” His motive was transformational: “I thought the resultant complex would help to change our present intellectual climate.” Unfortunately, no such anthology existed, he tells us.

This compellingly rich yet provocative Cage work received a rare and thought-provoking concert performance on May 28, by the Music in the Barns Chamber Ensemble at the Great Hall in Toronto.

It was the keystone work of a concert which included works by American minimalist Philip Glass (Tissue # 1, 2, 7, 2002) and Canadian postmodernist Michael Oesterle (Daydream Mechanics for string quartet, 2001). The concert was the centrepiece of the evening, which also included, in other Great Hall rooms, Becoming Sensor, a multi-sensory installation by Natasha Myers, Ayelen Liberona, Allison Cameron, Rosina Kazi and Nicholas Murray; and The Great Arc by the New York City duo Dana Lyn & Kyle Sanna. All of these Music in the Barns events were created for the Canadian Association for Theatre Research conference titled Performing the Anthropocene: Setting the Stage for the End of the World, held in Toronto the last week in May.

One of Lecture on the Weather’s most significant – and perhaps challenging – features is the work’s essentially multimedia and highly collaborative nature. It is a result of the collaborative processes set up by the composer to include his own text, texts by Henry David Thoreau (from which Cage selected relevant sections, filtered through I Ching procedures), recordings of environmental sounds produced by American composer Maryanne Amacher, plus a film by Chilean visual artist Luis Frangella using Thoreau’s drawings. As for live performers, the score calls for 12 expatriate “vocalists and/or players” with independent sound systems, each “given an equalization distinguishing it from the others” – emphasizing Cage’s socio-political agenda in the piece.

On one level, Lecture on the Weather is an homage to Henry David Thoreau’s philosophy, words and drawings. A New England transcendentalist writer and naturalist, much of the nature sounds reflected in Thoreau’s work are represented in Cage’s piece. On the other hand, the methodology of Lecture on the Weather conforms to well-established Cagean practices of that period, such as employing I Ching divination to determine compositional choices, as well as a tip of the hat to his own back catalogue in the form of his most iconic work 4’33”: the durational range each speaker-vocalist is given is determined by multiples of 4’33”.

The work also serves as a radical personal political statement, an incisive critique of his home country’s place in the world. Cage concludes the first section of his Preface by linking the corruption of the laws of the land when it “concentrates its energy on protecting the rich from the poor” to leadership lacking in “not only aspiration but intelligence (as in the work of Buckminster Fuller) and conscience (as in the thought of Thoreau).”

Lecture on the Weather has long been recognized as the most overtly political of Cage’s oeuvre. It points fingers, raises questions. It is part polemical lecture, part experimental film, theatrical performance, part environmental sound poem. It is problematic (and problematizing) to the bone. And – as the compelling Music in the Barns performance on May 28 demonstrates – that is why it’s still as relevant today as the day it was first performed.

Lecture on the Weather was presented by Music in the Barns on Sunday, May 28 at the Great Hall in Toronto, as part of a series of works presented for the conference Performing the Anthropocene: Setting the Stage for the End of the World. For those curious about the deep backstory of this work’s commission, I recommend David Jaeger’s first-person account in his October 26, 2016 WholeNote article.