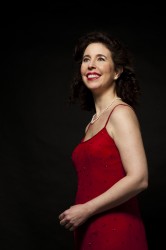 This summer, Campbellford’s Westben Arts Festival once more beckons audiences to their corner of the great Canadian outdoors. From July 21 to 23, their “piano weekend” holds special appeal for piano lovers—if the names Angela Hewitt, Jan Lisiecki or Rashaan Allwood don’t ring a bell, this is the perfect opportunity to get acquainted with the current generation of Canadian pianists who continue to carve their niche.

A veteran pianist who has performed on various continents, Angela Hewitt is looking forward to playing at Westben on July 23. If the sold-out performance is any indication, the audience is also anticipating the date. “I haven’t done a summer tour in Canada for many years, so it’s nice to be doing one again,” Hewitt shared with The WholeNote earlier this month. “Summer festivals like this [at Westben] are very popular and rightly so. Hearing music in a setting other than the standard concert halls is always a special treat when it’s organised well. People appreciate the intimacy and the excitement of it all.”

Fellow pianist Jan Lisiecki will perform at Westben the day before Hewitt, on July 22. His program includes works by Schubert, Schumann and Chopin—pieces with ample grandeur to fill a large concert hall—but he has no qualms about the shift to outdoor performance. “Performing in nature reflects entirely what Canada is about,” Lisiecki explained to The WholeNote. “It is not only an urbanized country—most of our land is pure beauty. To be a part of that and to create beauty in music is simply a great joy.”

Playing outdoors brings a veritable breath of fresh air to the listening experience. “Many unexpected things may happen,” continues Lisiecki. “Being close to nature means that you also enjoy the sounds and responses from birds, or simply the wind rustling through the leaves. It is a completely different way of engaging with classical music.” Mother Nature also works its magic on the artist: “I think it creates a better bond between the performer and the audience, and it feels more at ease—less strict, more flexible.” 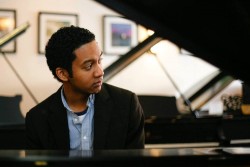 Rounding out the piano lineup, Rashaan Allwood will make a two-part appearance in an innovative program that plays directly to Westben’s natural surroundings. In an evening concert on July 21, Allwood will present two major birdcall-themed anthologies by Olivier Messiaen. The following morning, audiences will be invited for a stroll in Westben’s backyard among birds and other wildlife, with musical commentary by Allwood.

Messiaen is known for evoking birdcalls in his compositions, and Allwood believes the composer strove to capture the raw, unembellished sounds found in nature. “Rather than trying to impose my own musical standards of beauty on the birds, I just hear them as what it is: crazy, sometimes manic, but sometimes sweet,” Allwood says. “You hear the chaos and the polyphony of nature—eight birds singing at once, leaves rustling in the wind.”

His affinity for the music of Messiaen was an acquired taste. “I was confused at first! But I knew that I loved Messiaen, so I thought there must be something here!” he adds. It turns out the key to understanding his music lies outside the practice room: “A big thing for me was learning that to make good music, you have to experience things; otherwise, you have nothing to draw on. So then I got really interested in ‘what else can I learn from outside, instead of trying to get better by just sitting and practising for a long time?’”

Compared with Messiaen’s untouched treatment of the sounds of birds, Allwood finds that other composers like Liszt, Ravel, or even Beethoven repackaged their impressions of nature. “When Liszt hears birds, water, or other natural elements, I feel he wants something very light, beautiful, pretty. He takes those words, and tonicises them to music.”

Despite his reputation for sometimes writing difficult-to-approach music, in an era where processed products seem to be losing their appeal, Messiaen could be food for the soul. What is the key to accessing his soundworld?

“I think we’re often worried about new things, because we don’t know if we’re going to like it,” he continues. “When you give people something they can contextualize, the audience gets just as excited [as they would with more mainstream music]. I think it’s actually quite possible to engage them in an hour of Messiaen, despite the non-believers.”

Here in our own backyard, there is still fresh ground to be charted for classical music—and events like these are a compelling step in that direction.

Jennifer Liu is a recent graduate in piano performance, and has written on classical music for La Scena Musicale, The WholeNote Magazine, and Musical Toronto.