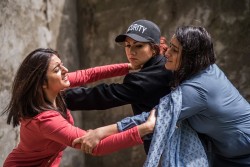 I always enjoy the anarchy of possibility at the Toronto Fringe Festival, where all the shows are chosen by lottery (though some in smaller categories such as “international” or “national” as opposed to the majority which are Toronto-based). With five days left in the festival, which runs until Saturday, July 16, there’s still lots to see – especially for those with an interest in musical theatre.

Musicals have always been part of the theatrical appetizers on offer, and sometimes those musicals have gone beyond the fringe to further productions elsewhere – even to the heady heights of Broadway as in the case of the gloriously funny Drowsy Chaperone, which I remember seeing at the George Ignatieff Theatre back when it first appeared at the Fringe in 1999. This September, another new musical takes its first steps beyond the fringe where it was acclaimed last year: Life After by rising Toronto lyricist and composer Britta Johnson, which (in an expanded and reworked form) will start off the 2017/18 CanStage season in a co-production with the Musical Stage Company directed by Robert McQueen (who directed the Fringe version) with music direction by Reza Jacobs.

Perhaps one of this year’s shows will catch the imagination of its audiences and follow a similar path to bigger productions. There are certainly a lot of possibilities: there are over 160 shows at this year’s Toronto Fringe and, as usual, they range widely from heavy hitters trying out new material to newcomers writing their first show, with almost every stage in-between. Twenty-three of these are listed as musicals (including four – half! – of the FringeKids list), 11 as dance pieces and several more are plays that include music as an integral element.

The most anarchic of all would seem to be The Confidential Musical Theatre Project (p. 40 in the Fringe Program), where the details of the performance are kept confidential until the moment the show begins. Even the performers won’t know until an hour before, when they meet for the first time for a quick rehearsal. This should be promising, going by the success over the past year in Toronto of The Confidential Opera Project (also produced by Marion Abbott) as well as the reported success of the musical theatre version elsewhere.

As for themes, this year the one that jumps out is strong women (or girls) standing up to a harsh and confusing world. Given the state of the real world these days, this is not a surprising trend, but it IS nice to see a preponderance of girls as the heroes. This is the theme at the heart of Everything There is to Know (p.44), one of my top picks and also the most full of heavy hitters: book and music are written by the acclaimed Aaron Jensen and the creative team are all top drawer award-winners who have worked across the country, including director Lesley Ballantyne, choreographer Susan Cuthbert, artistic adviser Jim Warren, and producer David Warrick. The story centers on 11-year-old Sophie, who, as the world crumbles around her at home and on a global scale, finds a way to deal with everything coming at her by using her imagination.

On a more serious note, Seeking Refuge (p. 45) by Rick Jones (the Paul O’Sullivan prizewinner for the best new musical theatre script submitted to the Fringe) takes up the international theme as it follows two sisters who are left homeless and without family in the midst of an unnamed civil war. The sisters have only their mother’s jewelry left to barter for passage to freedom – and only enough to save one of them. 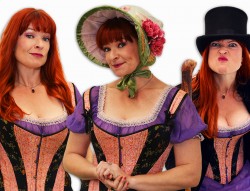 On the more comedic side are Stephanie Herrera’s solo show Am I Pretty Now: a musical romp through plastic surgery (p.40), billed as the “first ever” musical written on this theme, with the star also writing the script and music; and the two hander Bad Date (p.34), written and composed by Erin Aubrey, which promises to be a “racy, outrageous and daring take on a date gone wrong.” Another from the top of my list is New Zealand comedy star Penny Ashton’s one-woman Dickensian musical Olive Copperbottom (p.41): “Our story begins as the death of her beloved mother leaves Olive in the care of Mrs Sourtart at the Whackthechild Home for Wayward Waifs and Strays”...you get the idea. This is a follow-up to Ashton’s very successful Jane Austen solo musical Promises and Promiscuity, which toured Canada and internationally last year.

Often at the Fringe, the kids’ shows can be just as enjoyable for adults – a happy thing for parents, but also for creators wanting to deal with fables, parables, strongly set themes in simpler, bolder packages. Blink’s Garden (p.28), already seen in Winnipeg and Edmonton, focuses on a brave girl in a barren garden ruled by a selfish king; Fables from Far Away Lands (p. 64) also features a brave girl at the centre who, through traditional fables and original songs connected to bullying, female empowerment and working together, arrives at a fantastical land where anything is possible; Jay and Shilo’s Sibling Revelry (p. 29) (note, that’s “revelry” not “rivalry”), described as “Narnia meets The Phantom of the Opera,” is about a brother-and-sister team who help a fairy to find her courage, featuring a strong professional musical theatre cast including Jennifer Walls; and Death Meets Harlequin (p.28), by children’s author Nina Kaye, promises commedia dell’arte staging as well as guest “opener” circus company Deflying Feets. In between the adult and kids’ shows, teens also take the stage in a big way as the inaugural Teen Fringe ensemble (after an intense performance boot camp) forms part of the 50-strong cast of True North Mixtape (p. 46), which also features the award-winning high school show choir the Wexford Gleeks. The show itself, created by the company under the guidance of Edge of Sky Theatre, is also a banner show for our Canada 150 celebration year as it takes a tapestry of Canadian music hits “remixed, repurposed, and reimagined to tackle issues of home, identity, love and inclusivity.” Directed by Ann Merriam (Blood Ties: The Musical, Summerland), True North Mixtape features a diverse group of artists of all different ages, faiths, cultures, and socio-economic backgrounds exploring what it means to be a Canadian in the year 2017.

Dance and more experimental music and movement works also have a strong presence at this year’s festival. There are a few strictly dance pieces, but there are several that look to be stretching beyond a simple definition of ‘dance’ to break more experimental ground. Hexen (p.83 ), by a young company of recent Randolph grads, uses song, movement, dance and text to tell the story of an ancient coven of witches reappearing on the earth to warn the humans of a darkness beginning to seep into their lives. With The Old Wolf and the Sacred Trout (p. 32), award-winning playwright Donald Molnar experiments with storytelling through movement instead of words. Universal Horrors (p. 46) by award-winning Victoria indie dance company Broken Rhythm reinvents great classic horror films, including Dracula, Wolfman and Frankenstein, through dance, music, and multimedia elements.

Three more dance-based pieces focus on the female empowerment theme. The “F” Word (p.42), written and directed by Samantha Schleese and Melissa Hart of new Toronto-based SaMel Tanz, uses contemporary, Latin, and hip hop dance to explore the struggles of facing feminism in “a powerful, invigorating and comedic performance from a diverse group of women who aren’t afraid to say it like it is.” Picaza (p.45 ), an intriguingly ambitious multidisciplinary piece performed by 12 Toronto artists from different cultural and professional backgrounds combines contemporary and flamenco dance, physical theatre and original text and music to produce a fully original tale of the coming of age of a young woman. The dancers perform to a range of traditional and experimental music, with original text written in Spanish and English. Lipstique (p.44 ) in contrast sounds like a popular explosion of street dance theatre, performed by Mix Mix Dance Collective, that asks us to question the “future of the feminine.” Co-founded by Gemini and Dora award-nominated dancer and choreographer Emily Law and dancer Ashley Perez, Mix Mix is described as outrageous, fierce and thoughtful in their investigation of diversity in movement, music and art practice. 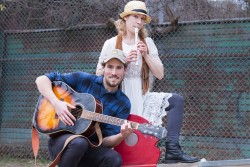 There isn’t enough space to talk about every show but there are two more on my “must-see” list that I want to mention. Rough Magic (p.45), a melange of theatre, movement and music, explores the story of characters Ariel and Caliban from Shakespeare’s The Tempest before the events of the play, most excitingly using aerial choreography for Ariel. Theatre Arcturus (Lindsay Bellaire and Phillip Psutka) won five-star reviews for their first show Weird at the 2016 Fringe: “This is aerial theatre, where the boundaries of physicality and truthful storytelling are pushed, and sometimes the world turns upside-down.” The Diddlin Bibbles Live in Concert (p. 54) on the other hand, features a singer-songwriter duo, who have traveled all the way from Widdlywack, Wisconsin to “spread their gospel of light, love and lust through their toe-tappin', knee-slappin' tunes.” Written by performers Matt Shaw and Lesley Robertson with director Dana Puddicombe, this sounds like a silly but very entertaining mash-up of musical sketch comedy and mockumentary à la Christopher Guest. Lesley Robertson is one of the funniest performers on the current scene, having made a huge hit in the part of Dogberry in Much Ado About Nothing at Hart House this past fall.

Even with this short list of shows you can see there is a wide variety to choose from. No one can really choose for anyone else, and the real joy often comes from finding the unexpected hit or a show that connects when all you were trying to do was fill a gap in your schedule.

Toronto’s 2017 Fringe Festival runs until July 16. More details, including a PDF version of the festival program, can be found at www.fringetoronto.com.