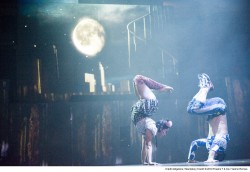 I was there last Friday night for the grand re-opening of the Sony (aka Hummingbird aka O’Keefe) Centre. My travelling companion was 19 years old and we celebrated his newly acquired legal drinking status, before the show started, by crawling from concession to concession (basement, lobby and mezzanine), partaking of Absolut-ly free shooters of various descriptions, and food-on-a-different theme at each concession. Clever idea, each concession was set up to mirror the ethnicity of different shows in this upcoming first season: Japanese at one station (the Kodo Drummers); Chicken Kiev and caviar – separately – for the Kirov Ballet (Kiev/Kirov what’s the difference); Chinese for “Dream of the Red Chamber”; ... well, you get the idea.

The final station we hit (Ontario Rack of Lamb) was in honour of the opening act, Cirque Eloize, hailing from Iles de Madeleine by way of Montreal. Not sure of the symbolism, except maybe the idea that, in hockey anyway, this part of Ontario is forever offering sacrificial lambs to real teams from Quebec. (In this case, I’d say it was the fine little circus troupe that was the sacrificial lamb, but more of that a bit later.)

As we cruised the building’s lobby we kept trying to figure out what was new, and what we were just noticing for the first time. But once inside the hall itself a few new things leapt out right away. First, the giant proscenium speaker towers, left, right and centre left absolutely no doubt the place is as capable of making an audience lose its fillings as the best movie house in town. “Get ready to rrrrrrrrumble!”, as they say.

Next, the cup/bottle holders on the back of every seat. I kid you not. Remember the days of “I’m sorry sir, you can’t bring that in here”? Not any more. This is going to be a great big jolly hall where you get to smell popcorn (or basmati) instead of stinky french perfume right from your seat, while watching live shows as good and loud as any movie. And where you can bet their bottom-line dollar almost every show is going to have an intermission so you can go refuel.

Speaking of intermissions brings me back to the topic of sacrificial lambs and Cirque Eloize. Because battle as they might, they never really seemed to recover from the intermission. Despite (or because of) the astonishing technical battery brought to bear on the show – lights, gritty urban sets, aforementioned tooth rattling sound array – they were, after all, just a circus troupe. And I don’t mean that in a demeaning way. They are astonishingly accomplished, jugglers, tumblers, contortionists, and all the rest of the stuff you might expect (and a couple of things you might not, like a guy on a mountain bike who was even more impressive for people like me who haven’t seen him or his brother do his thing on America’s Got Talent. Had it been 65 minutes, you’d have left mouth agape, heart racing a little, big smile, not trying to figure out if the show had too much of a story or too little.

But here they had to do it all competing with a big light show that, as often as not, seemed to be pulling focus as providing it. And then they had to stop and start it all again.

Make no mistake, the Sony Centre is back in business. And for those of you who used to think of it as a bit of a high-brow place, no worries. Its brows are now somewhere just above its upper lip like the mustache of the Bollywood heroes (of every cultural cuisine) that will strut its stage in the months (and hopefully years) ahead. It is going to have to be spectacular.