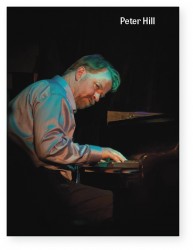 Toronto is full of great musicians, as WholeNote readers know all too well. So abundant is our wealth that certain players get lost in the publicity shuffle – particularly the sidemen, and especially the humble ones. One such unsung hero is pianist Peter Hill, frequently an accompanist to Toronto treasures such as Laura Hubert and Alex Pangman, as well as hundreds of singers at a popular jazz open mic, Lisa Particelli’s “Girls Night Out (where gentlemen are welcome too)” for over a decade now. In music he is dependable and consistent; in person he is pleasant if a bit bashful, with a sense of humour that borders on existential. A veritable whiz at transposing tunes and swinging at any tempo, it is not surprising to learn that he has a doctorate in algebraic topology. We sat down at Faema Caffè on Dupont to discuss singers and players, life and music. This was a path that he naturally followed from a young age:

“Music was in my family. My father played a variety of instruments and my uncle was a professional trombone player so we had an LP of his band. When I was little I would see my dad playing – he was never a professional, but I remember seeing him in the Santa Claus Parade. He was mainly an alto saxophone player but he played piano so he showed me how to read chords. Growing up, I did a little bit of classical – I wasn’t a great student – then I decided I wanted to be Elton John and that lasted about one summer. But I practised a lot that year. And the following year I joined a Dixieland band; I was about 19. I went back and had more lessons in my 20s, with a guy named Darwyn Aitken, who a lot of people studied with at that time. He was from South Porcupine near Timmins, a classical guy but he also played some jazz and Latin.”

His decision to pursue mathematics was more practical than passionate:

“I was fairly good at math in high school but I didn’t go to university after high school – I was playing a fair bit of traditional jazz – but then I decided that I was wasting my life because I wasn’t doing anything during the day. So I went back to school and tried a whole bunch of things. I chose math because there are no essays in it. My undergraduate took forever because I was taking two courses a year and I was playing all through that time. Once I was in graduate school I wasn’t really playing music at all. My PhD took five years – coming out of graduate school is when I started doing stuff with Laura again.”

JUNO-winning powerhouse Laura Hubert, whose fascinating career took her from Kurt Weill to indie-rock stardom then back to the blues, is best known for being co-founder and lead vocalist of the Leslie Spit Treeo. She met Hill while studying drama at the University of Toronto, through mutual friends.

“I did pretty well drag him out of the basement,” recalls Hubert. “I’ve known Peter Hill since 1979. He was in school and I was in school, and there was a party at UC Playhouse and some of his classmates were in the theatre program, and that’s how I met him. Then we just sort of got together every week to learn some songs. We didn’t even have a show, we would just go through the real jazz vocal book and that’s how I got to singing tunes like Don’t Blame Me and Skylark. After my record deal, Jerome Godboo left his Monday night residency at Grossman’s and Christina asked me if I wanted to do Monday nights. I thought, perfect! So I called Peter and we played that gig every Monday for nearly a decade. Grossman’s is where we worked out a lot of these songs. Peter has the fastest left hand in the business. He’s a damn good player, that’s for sure, and he works well with others. He’s my bandleader but he’s more like an old friend.”

Hill’s penchant for feel-good swingin’ is also put to great use by “Canada’s Sweetheart of Swing,” vocalist Alex Pangman. Known for her honest, sentimental approach to music of the 1930s, it’s hard to believe that this sweet-voiced stylist of song is a two-time double-lung transplant. A shining example of how music can provide inspiration, she is an advocate for organ donation, swing music and a huge proponent of Hill as well:

“Working with Peter Hill is a delight,” says Pangman. “He communicates well and really cares. He wants the singer to be comfortable. On top of that he knows a million songs. Often on stage you’ll hear me say: “Peter, we have a request for <insert random song>. What key would I sing that in?” And Peter will just start playing it in my key. I call him a singer’s best friend because of that, and have done so for about a decade! He just never lets me down. I appreciate how steadfast he has been, which in the world of gigging musicians, can be a rare thing. His fidelity to my band, the Alleycats, is honourable and he is very much a supporting pillar to my sound. He’ll write out the changes lickety split if I throw some truly obscure song from 1935 to him. He’s probably so good at all this because his mind works through tunes mathematically (he is a professor after all) but he plays with great colours and has a wonderfully artistic, thoughtful and rhythmical feel to his playing. He’s a pal, a father figure and a really good man to have in the trenches with me when they sound the battle call.”

Hundreds of singers, this writer included, met Hill through Lisa Particelli’s GNO Jazz open mic, where he sensitively accompanies vocalists of all levels along with Ross MacIntyre on bass. The unique jam experience that jam host/founder Particelli set up back in 2005 is all about fostering community, education and connection with no tolerance for bad attitudes, on or off the bandstand. Part of the charm is the variety of talent; all are encouraged to sing, regardless of experience. Hill’s combination of patience and sensitivity, as well as his encyclopaedic knowledge of the Great American Songbook, makes accompanying someone who has never been on stage easy as pie.

“Musicians have talked to me thinking that it must be awful to deal with – the different level of performers – but actually I never have had a problem with it. People are generally doing their best. As with any open mic, sometimes people come up who are not very good, I’m fine with that. Experiences I haven’t liked in music are usually with players that might be fairly good but have an attitude that makes them unpleasant. I haven’t really experienced that at Girls Night Out – maybe once or twice – but those people tend to not come back because they think they are too good for it, so it works out.”

Recently Hill has been holding down a weekly Tuesday night residency at La Rev (2848 Dundas St. W.) where he performs in duo format with a guest instrumentalist each week.

“The prototype for me is an album by Dave McKenna with Joe Temperley on baritone. I played there with Chris Gale, but he has a conflict on Tuesdays because he usually hosts the Rex jam. So I did it with Shawn Nykwist a few times – he is a great player and in my opinion undervalued. I enjoyed that, so I do play with him every third week, and then I do it with other people including people I hadn’t played with before, including some great guitar players like Jesse Barksdale and Reg Schwager. I love that this is on an acoustic piano that the venue maintains – it belongs to the owner, Indira, and she takes good care of it since she is a musician. I always look forward to Tuesday nights.”

La Rev is a real gem in the junction, for those looking for live music paired with Mexican cuisine. Dinner reservations are recommended at 416-766-0746. 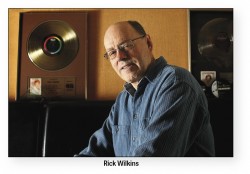 Rick Wilkins Back to the theme of unsung heroes, Ensemble Vivant is putting on a very special tribute to saxophonist and arranger Rick Wilkins, taking place at Grace Church on-the-Hill on Thursday, May 11, at 7:30pm, in celebration of his recent 80th birthday. Wilkins is best known for his arrangements for Oscar Peterson, Anne Murray, the Boss Brass and others; he also wrote for Ensemble Vivant for over 25 years, a group which he describes as “the highest calibre chamber music-making.”

Led by pianist Catherine Wilson, Ensemble Vivant’s genre-diverse repertoire culls classical with modern musical styles, and has been acknowledged as a pioneer in the piano-chamber music world. Says Wilson of Wilkins: “Rick’s charts are original, sparkling with imagination, always fresh and always a joy to perform…It has been the highest honour and pleasure for me to work with Rick all these years. Our performances of his music have brought lasting joy to so many audiences of all ages.”

Repertoire at the concert will range from J.S. Bach to Jerome Kern, to Astor Piazzolla, Ernesto Lecuona, Leroy Anderson, Isaac Albeniz, Charlie Chaplin and George Gershwin, to originals by Rick Wilkins. Special guests joining Ensemble Vivant will be jazz greats Guido Basso on flugelhorn, Mike Murley on tenor sax and Brian Barlow on percussion. Proceeds from the concert will benefit EUTERPE, a non-profit charity which among many initiatives brings live high-calibre, interactive performances of classical, jazz and related popular styles of music to children and others who might not otherwise be exposed to these opportunities. For more information visit:
euterpemusicarts.com

Support live music and on your way out be sure to tell the band how much you enjoyed their performance. Kind words go a long way to making an unsung hero’s heart sing!