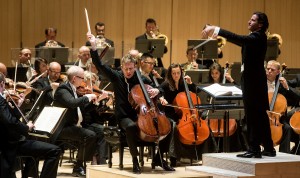 Dvořák, supposedly, never liked the cello – but if he could have heard cellist Johannes Moser’s captivating and emotive performance of the Dvořák Cello Concerto in B Minor with the Toronto Symphony Orchestra last month, I think he surely would have changed his opinion.

The February 21 concert program promised a varied combination of works, with the Cello Concerto spanning the first half of the evening, followed by Ligeti’s Romanian Concerto and Beethoven’s Symphony No. 4 in B-flat Major after the intermission. Despite their differences, these pieces revealed themselves to work together in a unique way. They all utilized contrasting instruments and textures to shift organically between tones and moods, with the light punctuating the dark. Gustavo Gimeno conducted the night’s concert, and I believe he held back slightly to allow these grand pieces to speak for themselves.

I arrived early in the evening of February 21 to Roy Thomson Hall, ready for the night’s repertoire. I settled in my seat, the lights dimmed, and a hush fell over the audience. Moser strode confidently onto the stage and proudly settled down directly next to the conductor’s platform.

The cello concerto began quietly, with a simple theme that instantly made me think that John Williams must have used Dvořák as inspiration for Rey’s Theme, a leitmotif from a recent Star Wars film. The orchestra built the melody with great force, until delicate plucking from the violins led to slow, lyrical phrases from the woodwinds. This moment of quiet provided the perfect stage for a new voice to burst in, as Moser began to play.

Everyone’s gaze locked onto Moser as he opened the movement with fervour and passion. The audience sat, transfixed, at this man whose effort and emotions were tangible. He moved almost violently at times, rocking back and forth on his bench, even shaking with the flow of the melody. An ecstatic smile filled Moser’s face after some of the particularly intense moments. The orchestra supported him with beautifully textured performances throughout.

Clarinets gently introduced the second movement, a wholly calmer experience. It had a more wistful tone, filled with longing. Around the time of completing this work, Dvořák lost his sister-in-law, and his love and loss resonate loudly through this more tender Adagio. The movement begins as it ends, with the clarinets gradually leading us to quiet.

The first and third movements serve as bookends to the piece, holding up the more tender second movement with their stronger dynamics and passionate, rich sounds. The piece seemed to tease an ending, growing louder and bolder, before softening once more. The orchestra came alive in the last few seconds, bringing the piece to a confident and swift end.

Bridging the gap between the two main pieces of the night was Ligeti’s four-movement Romanian Concerto. This work is influenced by folk music and culture, allowing for a freer feel than both Dvořák and Beethoven’s pieces.

Each movement of the Romanian Concerto felt unique and new. The first movement began with a sense of melancholy, with crafted, elegant phrases, while the second, with its lively tempo, caught me off guard. It was short-lived, but uplifting and energetic. In these moments, Gimeno brought vigour into the orchestra with his sprightly conducting. The third movement slowed down again and felt like a great contrast to the previous. The woodwinds provided a mysterious feel, luxuriating in their hypnotizing notes. And finally, the last movement brought back the energy and folk influences of the second. In the very last moments, the piece came to an abrupt end, with a crash of cymbals and blaring of trumpets.

Despite being considered one of Ligeti’s tamer pieces, it is still, quite honestly, strange at times. There were dramatic changes, from somber to jovial and back again with split-second transitions. I, however, found this enjoyable and surprising, and as the piece ran for a mere 12 minutes, even those who thought it too bizarre could hardly complain.

The final piece was Beethoven’s Symphony No.4. The first movement began almost mournfully (although swiftly moving into a lighter section), but overall, the symphony felt dignified, and as such, filled with the semblances of Classical convention. It is a masterful work in its technique and form, and the interjections of darker moments add tension. However, compared to the full emotion of Dvořák and the novelties of Ligeti, I found Beethoven could not hold my attention as intensely. The length of the piece, combined with the late hour, also disrupted my enjoyment.

As the lights returned and the final patter of applause died out, I left the concert hall slightly tired, but satisfied with the music I had just experienced. I welcomed the slightly bizarre nature of Ligeti’s Romanian Concerto, and even though my attention wavered, Beethoven’s Fourth Symphony still allowed for a magnificent performance. And yet, it was Moser’s standout performance of Dvořák’s Cello Concerto from that night that will stay with me, as a wholly engaging performance – and an unforgettable show of passion.

Jaimie Nackan is currently studying media at the University of Guelph-Humber. She is a pianist and former ballet dancer, with further passions in literature, writing, and film. She is pursuing a career in critiquing the arts, while also working on her first novel.