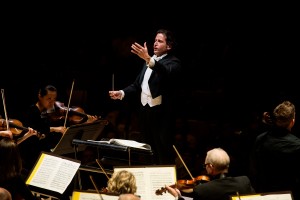 Turning the corner onto Simcoe Street, I always wonder whether I'm on the right block. My eyes follow the symmetric buildings, up and down, until the gleaming rounded concrete case brings relief. Roy Thomson Hall stands proudly isolated from its surroundings, and on the evening of February 21 there was a sense of camaraderie between the building and the concert inside it – both unconventional, both beautifully different.

Though the “Dvořák & Beethoven” concert program seemed at first glance like standard orchestral fare, both of the title works – Dvořák’s Cello Concerto in B Minor, featuring cellist Johannes Moser, and Beethoven’s Symphony No.4 in B-flat Major – were experimental pieces in the careers of these two composers. With the exception of his early A-major concerto (which was left unorchestrated), Dvořák had never written a cello concerto before, while for Beethoven, Symphony No.4 represents a subversion of the Classical symphony structure. Ligeti’s rarely-played Romanian Concerto rounded out the program. Throughout, conductor Gustavo Gimeno, in his TSO debut, expertly navigated the orchestra through abrupt musical changes in each of the three works.

Opening the program was Dvořák's Cello Concerto in B Minor. The tender Allegro was introduced with an opening theme in the clarinets and lower strings, echoed by the first violins and oboes, that quickly built to a full orchestral climax. The Czech composer, desperately homesick while writing this piece, introduced into the second theme the strong flavour of Bohemian folk music. A violinist himself, Dvořák was not impressed by the range of the cello and did not intend for this piece to be a traditional 19th-century virtuoso performance. Instead, he treats the cello as a voice supported by the orchestra, and it was only after this orchestral build that cello soloist Johannes Moser began to play.

This German-Canadian phenomenon left no doubt as to how he earned his third ECHO KLASSIK award in 2017 as “Instrumentalist of the Year.” Absolutely absorbed in the music, he swayed silently onstage for the full three-minute orchestral introduction before launching into his performance. I was amazed by the fervour of his stage presence. Moser executed the series of speedy variations of the opening theme with devilishly dexterous fingers before building towards the first movement's end with rising octaves, perfectly balanced against the orchestra’s drum rolls and militaristic trumpets.

In contrast to the first movement's triumphant conclusion, the slow Adagio evoked emotions of great sadness. Here, Dvořák alludes to Josephina's song, one of four songs written for his dying sister-in-law. Breaking from tradition, the piece has no cadenza; the third and final movement closes gradually in a diminuendo like a sigh, a supposed reference from Dvořák to the grief he felt when losing Josephina.

A brilliant performance of this work by Moser and the TSO had the audience on their feet before the last note faded away. If the cello was ever at risk of being swallowed by the orchestra, Moser's passionate performance certainly convinced us otherwise. Playing off the lyrical quality of Dvořák's concerto, Moser surprised the audience with an encore: a technically perfect rendition of the Sarabande from Bach’s Cello Suite 1.

After intermission, the folk music theme continued with Ligeti's four-movement Romanian Concerto. The first Andantino movement began with a moderate, comforting melody, while the Allegro vivace provided a strong, cheerful folk flavour. Instruments were unconcealed and each was given a moment to shine, with particularly impressive solo performances by Jonathan Crow on violin and Camille Watts on piccolo. In contrast, the third Adagio movement is more dissonant and the village band elements Ligeti added filter through. The finale movement is slightly frenzied and the folk themes are echoed by all the instruments, but dies down quietly with the violins and horns. Here, the whole orchestra joins in abruptly, signalling the end of the piece.

Ligeti's composition served as a good juxtaposition and bridge to the more classically structured work of Beethoven. The darker timbre and more subdued, moody feel of his Symphony No.4 in B-flat Major were a welcome change from the upbeat Romanian Concerto. From his middle period, this symphony adheres loosely to Classical structure but throws the audience about throughout, with bursts of quick musical passages and rapid tempo changes. It suggests a mood of anger, hurt and frustration – which is understandable, seeing as it was composed around the time when Beethoven realised he was losing his hearing.

The work surprises the audience throughout. In the first movement, the opening dissonances and lyrical theme were built up in the orchestra, before dissolving into staccato, soloistic passages. An abrupt end to the second movement left the audience in anticipation for the third movement – a lively Allegro vivace, with the unusual feature of a repeated scherzo and trio section. The fourth movement concludes with a sweet, classical build in the flutes that slows down dramatically before the violins and trumpets sounded the final three fast-stroked notes, leaving the audience with a sense of unresolved anticipation.

These three pieces created a perfect marriage between the known and unfamiliar, and Gimeno commanded an easy flow between works, staying fluid even when the music was abrupt. This charismatic guest conductor left listeners standing as proud as Roy Thomson Hall itself – and deserves the admiration of the audience and orchestra alike.

Formally trained in classical ballet, music theory, piano and flute, Esther van Eeden fostered a deep appreciation of the arts from a young age. To her, art is threaded into all aspects of life, and through her pursuit of a career in architecture, she strives to create environments that express human emotion.