Greetings of the new season to all early music lovers – you’re in for a great time ahead! I know, because in surveying the coming months I already find a vast and fascinating variety of music to talk about. There’s far too much to mention in this column – but here are a few of the many things that have caught my eye.

The earliest composer I see represented is Hildegard von Bingen, the German abbess, musician, author, naturalist, scientist, philosopher, physician, poet and visionary. Her feast day (the anniversary of her death in 1179) will be celebrated on September 17 in the Church of the Holy Trinity with a concert and labyrinth walk, entitled “Meditation in Motion.” This is an opportunity to experience the mystical properties of her music while either sitting and meditating, or walking the spiraling 36-foot labyrinth placed in the church for the occasion, or simply listening to the music.

At the other end of the spectrum, the most recent compositions represented on the early-music scene probably have yet to be written: Aradia’s February 5 project, entitled “Baroque Idol!”, is to elicit ten new compositions from ten young composers, thereby fostering new music for baroque ensemble using the tonal possibilities of old instruments.

There’s a wide range in other areas too. For example, you can hear early music on modern instruments, such as cellist Winona Zelenka’s stylistically aware performances of Bach’s solo suites for cello (September 2 at the Toronto Music Garden; February 24 at the Four Seasons Centre for the Performing Arts; April 16 at the Almonte Town Hall). Or you can experience romantic music on period instruments, such as pianist Janina Fialkowska’s performance of Chopin’s First Piano Concerto on an 1848 Pleyel piano – a Tafelmusik presentation from October 7 to 10. Contemporary music on period instruments can be heard on September 19, as the Windermere String Quartet plays Alexander Rapoport’s Quartet written in 2006 (as well as Schubert, Haydn and Beethoven).

The theme “Old World/New World” crops up, in two interesting programmes. Scaramella’s November 20 concert (with this same title) will pair European art-music with music of the colonies (specifically Brazil and French maritime Canada). On May 8, master gambist Jordi Savall and his ensemble Hespèrion XXI will evoke Old Spain, the Mexican Baroque, and the living Huasteca and Jarocho traditions in their programme “The Route of the New World: Spain – Mexico.”

As has often occurred in the past, there are some striking correspondences to be noticed in this season’s programming. For instance, who would expect to find all three pinnacles of Bach’s choral works performed in the area, within a three-month period? That’s the case this season: the B Minor Mass is presented by Tafelmusik from February 9 to 13; the St. John Passion is offered by the Toronto Mendelssohn Choir (actually the 70-voice Mendelssohn Singers) on March 3; and the St. Matthew Passion is programmed by the Masterworks of Oakville Chorus and Orchestra on April 15, 16 and 17.

If you missed Tafelmusik’s 2009 spectacular commemoration of the 400th anniversary of Galileo’s development of the telescope – or if, like me, you absolutely have to see it again – you’re in luck: a reprise of “The Galileo Project: Music of the Spheres” takes place March 2 to 6. A production like no other, it uses music, words, images and very imaginative staging and lighting to explore the artistic, cultural and scientific world in which 17th- and 18th-century astronomers lived and worked. It also features the orchestra performing almost completely from memory as they probe the wonders of the heavens.

Perhaps it’s the present climate of environmental consciousness? Our fellow furry and feathered creatures are represented in at least three programmes: September 18, Beaches Baroque (Geneviève Gilardeau, baroque violin, and Lucas Harris, theorbo) present “Beasts of the Baroque,” featuring baroque sonatas that imitate the calls of animals. Hot on its tracks, Classics at the Registry in Kitchener follows on September 19 with “Baroque for the Birds”: music inspired by birds, performed by Alison Melville, baroque flute and recorders and Borys Medicky, harpsichord. And February 5, Scaramella’s “Birds Bewigged” features musical improvisations based on readings of haiku, and poetic readings on an avian theme.

And I must draw your attention to some of the visiting artists coming this season: In addition to the above-mentioned ensemble from Spain (Hespèrion XXI), here are others to be noted: On October 26, the Venice Baroque Orchestra appears at Roy Thomson Hall to play both Vivaldi and Philip Glass. This group, founded in 1997, is recognized as one of Europe’s premier ensembles devoted to period instrument performance. On March 12, the a-cappella vocal ensemble the King’s Singers graces Koerner Hall stage to sing Palestrina and others. On March 23, Soundstreams presents Norwegian vocalists Trio Mediæval together with the Toronto Consort to perform a world premiere based on ancient music: James Rolfe’s “Breathe”, which draws inspiration from the music of 12th- century composer Hildegard von Bingen. The programme also includes medieval classics, music inspired by Norwegian folk traditions, and recent masterworks.

As well as all the above, you’ll find many other fascinating programmes coming up, which I hope to do more justice to in future columns – for example the Monteverdi Vespers sung by the Grand River Chorus on October 30; a concert of Josquin Motets and Chansons presented by the Toronto Chamber Choir on April 2; the Toronto Consort’s “Canti di a Terra” on April 1 and 2 with guests: Montreal’s Constantinople (who draw their inspiration from the music of the Mediterranean, the classical Persian tradition, the Middle Ages and the Renaissance) and Corsica’s vocal quartet Barbara Furtuna (who specialize in the centuries old traditions of Corsican singing).

Finally, you might want to expand your travel plans this month to include ancient Egypt, Scandinavia and the Baltics in Viking times, and Elizabethan England, with the following events taking place: Aradia’s semi-staged production of Handel’s Giulio Cesare in Egitto plays on September 11, fresh from Sulmona, Italy, where it has had four triumphant performances. On September 27 at Barrie’s Colours of Music Festival, Ensemble Polaris presents “Nordic Music to Love,” a modern tribute to the Vikings with original, traditional and new music on a wide variety of instruments. On October 2 and 3, Cantemus Singers celebrates “Good Queen Bess” with glorious music from the court of Queen Elizabeth I. 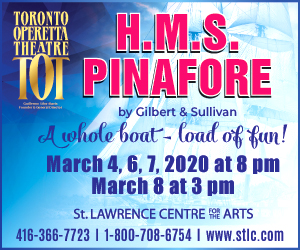