Each faculty member will conduct week-long workshops and then perform in four concerts in Toronto throughout May and into June.

Labyrinth Ontario is a made-in-Toronto modal music school founded by an Iranian-Canadian musician, but with roots in an unlikely place (a Mediterranean island), and perhaps an even more unlikely founding father (the English-born Ross Daly who boasts Irish ancestry). Let’s go explore.

Labyrinth Musical Workshop began in 1982 as the brainchild of the Cretan world musician and educator of Irish descent Ross Daly. His first series of Labyrinth workshops took place in 1997 in Athens, Greece.

Daly – a specialist on the music of the Cretan lyra (fiddle) and of the Ottoman court, a participant in intercultural composition before world music became a commercial term, and a composer – originally wanted to establish a space for a creative group of friends. His overall aim was to explore “various modal musical traditions from around the world, as well as of the potential for creative interaction between them.”

In 2002, a permanent base for Labyrinth was established in a restored manor house in the village of Houdetsi on the island of Crete, Greece. There Daly has fine-tuned his workshop model of concentrated weekly music lessons focusing “primarily on the modal musical traditions of the Balkans, Middle East, Central Asia, India, North Africa,” as well as presenting concerts by “outstanding teachers/musicians, the prime representatives of these traditions.”

While leading international musicians and students travel twice a year to Labyrinth’s Cretan village environment, in the last two years Daly’s notion of teaching global modal musical traditions has really caught fire. It has spread across Europe and now jumped the Atlantic to Canada. In 2016 Labyrinth Catalunya was established in Barcelona, and in 2017, Labyrinth Italia in Santa Sofia. This year Labyrinth Cyprus launched, with three modal music seminars which were held April 10 to 15, 2018 in Nicosia, capped with a concert. 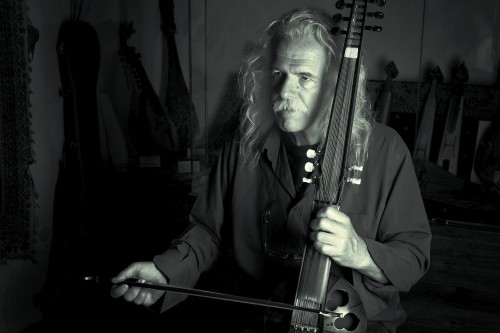 That brings us to the most recent iteration of the concept, Labyrinth Ontario Musical Workshop in Toronto. And it may be the most ambitious of the Daly-inspired spinoffs, animated by a series of 11 workshops running over four weeks, plus four concerts.

Labyrinth Ontario was on my radar back in September 2017 when I offered a preview in my World Music column, observing that it “focuses on the education of a new generation of musicians – and also audiences.”

Two Toronto-based musicians are at the heart of the project. Virtuoso tar (Persian lute) player and teacher Araz Salek serves as its artistic director and keyboardist and sound designer Jonathan Adjemian as its admin director. Having begun his music career in Iran, Salek has been active as a tar player and leader in Toronto for over a decade in both Persian classical music ensembles as well as in eclectic music circles, such the Persian-flamenco fusion group Persamenco. He performs often in other settings too, in Toronto and on tour internationally, experimenting with new transcultural groupings and various crossroads of classical, experimental and improvised music, seeking out creative musicians in all those areas.

Starting an unorthodox music education and concert series is certainly a risky endeavour, but Salek’s street cred in this arena positions him strongly to kickstart Labyrinth’s presence in Toronto. For example, he has served as an instructor at Daly’s Labyrinth Musical Workshop in Crete and since 2012 has been a core member, with Daly, Pedram Khavarzamini and Kelly Thoma, of the Toronto-Crete quartet This Tale of Ours – a group continuing to be a source of inspiration for Salek. They are all workshop leaders in Labyrinth Ontario’s inaugural season.

I followed the story to the 918 Bathurst Centre. There, on the evening of September 15, 2017, Labyrinth Ontario held its launch and fundraising concert. The event had a warm, mixed-community feel, underscored by the ethnically diverse music and foods on offer covering Persian, Southeastern European, Turkish, Kurdish and Middle Eastern ground. That diversity was reflected in Labyrinth Ontario’s board of directors introduced at the event: Poorya Ferdowsi, Pouria Lotfi, Alia Hamdan O’Brien, Irene Markoff and Rob Simms.

Silk Road and the Spirit of the Extended Modal Family

Simms, associate professor of music at York University, recently posted an essay on Labyrinth Ontario’s website placing its project into a much larger frame. He begins by pointing out that while as recently as 40 years ago “Toronto was thoroughly white-bread, WASP dominated,” today it is “regularly cited as one of the most culturally diverse cities in the world. While this is a wonderful fact and opportunity for those of us who live in the city, it is even more remarkable how recent this came to be.” He continues that while world history “features many previous hotbeds of cultural contact … none of these come close to the complete global integration we now inhabit and that forms the fabric of daily lives” in major global cosmopolitan centres.

Simms then invokes the example of the network of trade routes known as the Silk Road which provide us with “an incredible continuity of musical expression stretching from North Africa, Southern and Eastern Europe, clear across to Central Asia and Western China. This massively extended musical family shares similar social contexts for performance, aesthetics, philosophy, performance practice, instrumentation and musical structures – rhythmic cycles, forms and melodic modes (scales with particular behaviours or personalities).”

Among the various systems of melodic modes which grew up along the Silk Road, one of the most common is the maqam, literally “station, place” in Arabic. “While the underlying musical foundation was shared … a rich array of varying musical traditions flowered, cross-pollinated and withered through the centuries into our own time. Most of the musicians stayed in their particular sonic and social worlds … Until the late 20th century” – which is when Ross Daly enters Simms’ essay. Simms nominates Daly as one of the “early pioneers of exploring the larger maqam family.” Attracted to the lyra tradition of Crete where he has lived for over 40 years, Daly has “established a unique and highly successful series of workshops that brings together master teachers of myriad maqam traditions and keen students from around the world.”

One of the keys to the success of Daly’s Labyrinth Workshops is that they are at the same time informal and highly social yet also intensive and serious in musical focus. In this mix Simms sees the “spirit of the extended modal family tradition throughout history,” echoing Daly’s own ethos: “Labyrinth is more than a musical workshop, it is a way of life through music.”

In addition to the workshops, faculty will give a concert each week, and TBA-moderated panel discussions will be open to the public.

The first concert on May 12 features This Tale of Ours, a quartet with members hailing from Canada and Greece, though certainly not musically limited by those nationalities. (The group’s membership – Daly, Thoma, Khavarzamini and Salek – bridges the parent Labyrinth with its newly minted Toronto offspring.) Look to The WholeNote listings and the Labyrinth Ontario website for details on this and the other three concerts.

Each month in this column I chart a few of (what appear to me at the time as) the high points of master musicians from around the world appearing in Toronto and region in concerts, festivals and one-off workshops. From my vantage point it seems Labyrinth Ontario takes this situation to yet another level, focusing our attention intensively – and at an uncompromisingly high artistic level – on a few fascinating and related modal musical cultures.

Borrowing a phrase from Simms’ essay I’m prompted to ask whether Toronto is indeed the “perfect location to carry this amazing, vibrant Eurasian cultural treasure [offered by Labyrinth Ontario] to wherever it is heading in the 21st century.”

It’s too early to give a definitive answer: we’re still weeks away from the final workshop and concert. But the fact that this ambitious project was founded by a person who has emerged from outside Canada’s established cultural elite circles should be a source of pride in the direction we as a community are moving. I will continue to cover Labyrinth Ontario’s progress as it seeks to explore sites of our own Toronto brand of “post-global” music.