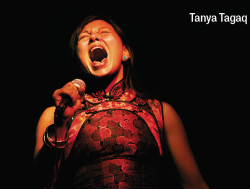 It’s still May as I write this, yet in that disconcerting way Mother Nature has in Southern Ontario, hot sticky weather’s already suddenly, shockingly arrived. “Why settle for mere spring when you can have summer?” she seems to be asking rhetorically. It almost feels like an ironic taunt coming after that miserably long winter we just endured. But as surely as the arrival of the humidex, BBQs, picnics, heatwaves and dog days – summer’s here to tarry awhile.

One of the first signs of the official arrival of our outdoor music season is the Luminato Festival. Now in its eighth year, it runs Friday, June 6 through Sunday, June 15. Luminato bills itself as “Toronto‘s international multi-arts festival” which for ten days each June transforms Toronto’s “theatres, parks and public spaces with hundreds of events celebrating theatre, dance, music, literature, food, visual arts, magic, film.” Festival artistic director Jorn Weisbrodt and his team’s ambitious aim is to reflect “Toronto as a crossroads of ideas, cultures and traditions.”

In order to navigate through the dozens of concerts scheduled and to get a firm handle on the urban geography of the downtown David Pecaut Square, I spoke with veteran world music programmer Derek Andrews, Luminato’s music curator. “There are two stages at what we call the Festival Hub, the large Pecaut Stage, and new this year: the smaller Slaight Stage.” In addition, the featured site installation this year will lend a suitably tropical feel to Pecaut Square. Luminato has commissioned Cuba‘s Los Carpinteros to design an ingenious surfside-themed environment titled Cardboard Beach stocked with loungers, umbrellas and lifeguard stations.

“One of our themes this year is a celebration of the performing arts of the Americas with a focus on the Caribbean and Latin America, in anticipation of Toronto’s 2015 Pan American Games,” added Andrews. “Audiences will be able to experience a tropical Toronto, with samples of samba, cumbia, reggae and other funky party music. We have also taken the Festival Hub up a notch with three ticketed attractions, The Roots, TV On The Radio and Ziggy Marley.” I’ll train my spotlight on a few of the world music concerts by both local and international musicians. For more, please see our listings and the well-appointed Luminato website.

June 10 four First Nations’ acts grace The Hub in the exciting program “Northern Lights and Music.” Nick Sherman opens the night at 6pm on the Slaight Stage. His songs, deeply rooted in his Northwestern Ontario experiences, are characterised by an “uneasy, yet always fluid transition between unabashed joy and sorrow.” The JUNO-Award-winning five-piece Toronto band Digging Roots follows, co-led by musical partners Raven Kanatakta and ShoShona Kish. Their genre-blending music has been dubbed “Indie roots,” “global blues” and “Aboriginal alternative.” Best I think to hear them live as they access and layer even more vernacular musical styles including hip-hop and reggae with a very good chance of bluesy undertones.

Buffy Sainte-Marie then takes the Pecaut Stage. Certainly among Canada’s most compelling female singer-songwriters, Sainte-Marie’s impressive career spans some two dozen albums. And her Cree heritage is never far from her voice. Wielding her impressive melodic gifts, incisive lyrics and grippingly expressive vocals, she’s perhaps best known for assaying the glories and tribulations of indigenous people across the Americas. While unflinchingly “speaking truth to power” Sainte-Marie is however never afraid to rock out.

Capping the evening the brilliantly innovative Inuk vocalist Tanya Tagaq and her band perform live music to American filmmaker Robert J. Flaherty’s classic silent film Nanook of the North (1922). While widely considered a groundbreaking documentary film it has in recent decades been contested, viewed as being contaminated by directed dramatic scenes in the “salvage ethnography” genre. Tagaq is celebrated for her concerts with Björk and the Kronos Quartet. On this project she digs into her own Nunavut childhood and subsequent musical creations, along with music by Canadian composer Derek Charke, to challenge and reclaim aspects of Flaherty’s feature film, animating the film’s directed silent set pieces with emotive soundscapes.

Toronto Music Garden: I’ve spent many pleasant summer evenings over the years listening and even on occasion playing at Harbourfront Centre’s cool and colourful Toronto Music Garden. The garden was co-designed in 1999 by cellist Yo-Yo Ma and landscape architect Julie Moir Messervy to reflect Bach’s Suite No.1 for Cello. No doubt about it, though the imaginatively curated (by Tamara Bernstein) free summer-long concert series held there is on an intimate scale, it’s nevertheless a music festival. It is certainly one of Toronto’s perennial musical treasures. This garden by the lake resounds with culturally diverse concerts most Thursdays and Sundays in the summer. Here’s a sampling.

The season opener on July 3 is titled “Kahnekaronnion” (The Waters). Singing in English and Mohawk, the Akwesasne Women Singers share their songs honouring Hodenausaunee women’s experiences, wisdom and humour. The group is joined by Odawa composer and flutist Barbara Croall performing her compositions on traditional cedar flute.

July 6 marks the Toronto debut of the Vancouver based trio Lalun in “Dreams from Andalusia and the Silk Road.” Featuring the eclectic musicality of Liron Man (hang drum, flamenco guitar), Lan Tung (erhu and vocals) and Jonathan Bernard (percussion), Lalun merges their musical voices in an exploration of Spanish, Chinese and other cultural landscapes.

Vocalist Bageshree Vaze and Vineet Vyas (tabla) return to the Music Garden on July 24. In “Music from the Gardens of India” they present Hindustani classical songs with garden themes, including depictions of the iconic love story of Krishna and Radha in the garden of Vrindavan.

“Hanabi: Musical Fireworks in the Garden” on August 21 presents garden regulars Nagata Shachu, Toronto’s leading taiko ensemble, in a program inspired by the Japanese word for fireworks. Hanabi combines the kanji characters for “flower” and “fire.” Judging from the sonic power of their drums Nagata Shachu will probably only require a minimal PA.

August 24 the Sarv Ensemble takes the audience on “Seyr-o Safar: A Musical Journey Across Iran.” Joined by virtuoso percussionist Pedram Khavarzamini, the group performs a wide range of folk and classical Persian music in their own arrangements.

Closing the season on September 4 the U.S.-based Veretski Pass Trio, among the world’s most celebrated klezmer ensembles, presents “Jewish Music from the Carpathian Bow.” Their rare repertoire centres on pre-World War II Jewish music from Carpathian Ruthenia, Bessarabia, Ukraine and Romania as well as from the former Ottoman Empire. It’s arranged for accordion, violin, cimbalom, double bass plus other regional traditional instruments, and performed in their compelling virtuoso-raw village style. 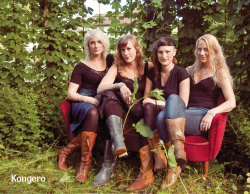 TD Sunfest 2014: London, Ontario’s TD Sunfest 2014 celebrates its 20th anniversary as “Canada’s premier free-admission festival of the global arts” from July 3 to July 6. I used to frequent the festival when it was a more modest affair, charmed by its small-town feel. Today TD Sunfest turns downtown London’s Victoria Park into a culturally diverse party where over “35 outstanding world music and jazz groups representing almost every region of the planet entertain on five stages.”

This summer’s headliners include Cuban dance band stars Los Van Van, the “ferocious folk foursome from Manchester, UK” 4Square, and Comas (Ireland/Belgium/USA), a band which bills itself as “a unique blend of traditional Irish music.” Also featured is the Swedish "folk 'appella" quartet Kongero. These four women coax traditional Swedish music out of its rural past, performing it with precision, emotion and humour. Paul White of Soundonsound cheekily quipped that they’re “living proof that Autotune didn’t need to be invented.”

With more than 275 exhibitors and food vendors at TD Sunfest you come for the music and sun, but tarry for the international food, clothes, crafts and camaraderie you find there.

Afrofest 2014: Music Africa presents Afrofest 2014 at Woodbine Park on July 5 and 6, starting at 1pm on both days.

At time of writing the Afrofest programming had not been finalized, but African and Canadian musicians will perform alongside a Children’s Village and African-centric food, artifact and clothing vendors. Visit the Music Africa website for more detailed program information.

May all you wonderful readers have a fun and safe summer filled with comforting as well as challenging sounds from around the world. See you all in the fall.