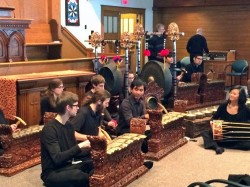 A recent article, “The five types of music discovery” by Stuart Dredge (The Guardian March 19, 2014), examines current ways some people “find new bands and songs.” He wonders what future search methods may be employed and his answer appears to centre on the smartphone holding the key to such searches. Dredge argues that the popular music industry is anxious to discern consumers’ tastes and choices in order to deliver what it feels listeners want, characterizing it as “music discovery.” It’s a process driven by commercial interests increasingly tied to mobile apps. Dredge proposes five platforms for music discovery. They are “friends, the crowd, curators, algorithms and serendipity,” all of which he links to smartphone and tablet platforms. Some of these domains use social networks as a “music discovery funnel.”

Dredge’s extended discussion of the role of digital music discovery in the commercial environment may puzzle, disturb, fascinate or elicit a combination of those responses from readers of this column. I have my own reservations. First of all there are clearly many more kinds of music and many more ways to discover them than he cares to deal with. Yet it got me thinking. Are there/will there ever be apps with the potential to create new audiences for world music, opening ears to a transnationally coloured musical palette?

Can commodified music discovery serve as a possible metaphor, or even a model, for the expansion of awareness of musics seen from a global perspective? How can various world musics grow their participants and audiences in our multicultural and multiethnic society? In addition to apps, which currently focus on the search and acquisition of popular commercial music genres, I can think of many other platforms through which this process occurs. They include: recordings on vinyl, tape, CD and other digital media; broadcasts of various types; the online blogosphere and social media; the live concert hall, pub, club, community centre; Meetups, hands-on playing workshops and community groups meeting in consulates and embassies.

Those interested can seek, discover and experience music from outside one’s culture of birth by all these means and I’ve touched on activities at many of them over my years at The WholeNote. Even faith-based congregations present an opportunity for such discovery: see the end of this column for an example.

Yet another platform for world music discovery is the performance courses offered at Canadian schools, conservatories, colleges and universities. Once a rarity and to a degree a novelty in the 1970s and 1980s, they are slowly becoming embedded in an increasing number of music schools alongside the received canon of classical Western music offerings.

Gamelan: I’m going to examine this process through a case study of the introduction of the instruments and repertoire of the gamelan begun in Canada in the 1980s. Emblematic of interactive communal music making, at its core gamelan is orchestral music indigenous to several regions of Indonesia. It’s played on multiple types of tuned and untuned percussion instruments but also often features wind and string instruments, as well as solo and group vocals. The source of this music is about as geographically removed as possible from Toronto, but it’s a subject close to my heart. For over three decades its study, performance and teaching have been my musical staples. During that time I’ve witnessed the incremental growth of the gamelan scene which in 1982 had no resident Canadian performers. Then only a handful of LPs and the very occasional Indonesian touring group booked in our larger halls gave any hint of the musical treasures awaiting our discovery.

In the U.S. gamelan music touched down earlier. Theatrical gamelan performances were staged daily by a visiting group at the 1893 Chicago World’s Fair, of which audio recordings still exist captured on early cylinder technology. The inauguration of the formal study and performance of gamelan music by Americans however dates from the mid-1950s when Mantle Hood began teaching Javanese gamelan privately in his California home. One of the founders of ethnomusicology, Hood first offered the course “Music and Dance of Java” at UCLA in the 1964-65 academic year; the Javanese musician Hardja Susilo taught the dance component. From that single course today dozens of academic gamelan programs flourish in North American colleges in addition to up to 200 active community groups.

At the Faculty of Music, University of Toronto, Dr. Annette Sanger, an ethnomusicologist specialist in the music of Bali, has directed her Balinese gamelan semar pegulingan performance course for over two decades. Spreading the music to new audiences in the 1980s I found myself among the first in Canada to lead occasional gamelan music workshops. They were held in Toronto on the Evergreen Club Gamelan’s set of degung instruments. In the 1990s and 2000s my teaching increased exponentially, introducing Torontonians to the Javanese gamelan at York University, the Royal Conservatory of Music and to many thousands of students at the Toronto District School Board, among several other institutions. This year the Evergreen Club Contemporary Gamelan is celebrating its 30th season and most of the other gamelan ensembles and courses mentioned are still active, with other universities located on both east and west coasts introducing their own courses in the last decade.

The Grebel Gamelan: The discovery of gamelan music by playing it is still taking place in Ontario. I was pleased to read recently that Conrad Grebel University College at the University of Waterloo established a Balinese gamelan and a course in the 2013 fall term. Dr. Maisie Sum, the newly appointed faculty member in Global Music and the university’s first ethnomusicologist, teaches the course titled “World Music Ensemble: Gamelan Music of Bali” casually known as the Grebel Gamelan. Moreover Sum’s incoming mandate includes the expansion of “the study and performance of ‘world music’ in the music program.” Music students can expect to be introduced “to unfamiliar sounds, to [discover] global music by actively participating as listeners and music makers, and to encourage them to ask questions and make connections with their own beliefs, values, and practices.” Will such wide-ranging – idealistic even – goals articulated in this mission statement attract students, regional community engagement and listener participation?

Seeking background on the story of the arrival of Waterloo’s first gamelan I spoke to Sum at her office on a cold and rainy March 19 afternoon. It turns out she is a product of the Canadian gamelan scene: “I’m a member of a Balinese gamelan in Montreal and received my PhD in ethnomusicology from the University of British Columbia.” In Vancouver she studied (Balinese gamelan) gong kebyar with Michael Tenzer followed by years of music field work in Bali. “Conrad Grebel’s gamelan semaradana, a kind of seven-tone Balinese instrumental ensemble, is currently rented from its New York owners,” she noted, “but the university is exploring the purchase of its own set for the long term.” There’s also the ever-pressing matter of where to permanently house a full gamelan which takes up considerable real estate, an issue that’s been problematic for many institutions. Sum seems confident, however, that solutions will be found given the very positive, enthusiastic reception of the Grebel Gamelan course and its performances by faculty, students and audiences: “Enrolment for the ensemble doubled in the winter term, so we currently have two groups.”

What does having the first resident gamelan at Grebel/UW mean for music discovery in the Kitchener-Waterloo region? “It is important to us in many ways, some of which include broadening our students’ musical and cultural awareness, and expressing our core values such as community building, creativity, and global engagement,” Sum replied. While the new ensemble is not yet playing all the various types of instruments of the gamelan semaradana the Conrad Grebel Gamelan Ensemble video clip from its November 27, 2013 noon-hour concert exudes confidence. Enthusiastic smiles abound and a standing ovation greets the musicians. The clip is on YouTube awaiting your discovery. The group demonstrates a performance level belieing less than three months’ prep time between introducing the students to the instruments to the gig itself. This speaks volumes about their dedication but also about the embedded quality and power of the community musical tradition they passionately convey. It also speaks highly of the teaching skills of Sum and her expert Balinese guest musician, I Dewa Made Suparta.

Sum provided one more demonstration of music discovery, one which extends to transcultural community interaction. On February 2 this year her Grebel Gamelan was invited to take part in a church service at the Rockway Mennonite Church in Kitchener. The members of the congregation heard Grebel music theorist Carol Ann Weaver deliver a cross-cultural sermon titled, “Gamelan as Gospel: Creating Communities of Peace,” exploring parallels between communal musicking embedded in the performance of Balinese gamelan and Mennonite notions of community.

You can catch the Grebel Gamelan’s youthful energy at their concert on April 1 at 1:30pm in the Great Hall of the Student Life Centre at UW and the next day at noon at the Conrad Grebel chapel.

A few other concert picks:

April 1 at the Musideum, a fascinating blend of voices brings “Songs of Gaia meets the FreePlay Duo” to downtown Toronto’s living room concert hall. Vocalist Saina Singer and bassist George Koller meet the FreePlay Duo (Suba Sankaran and Dylan Bell) in improvisations borrowing from many global music traditions. While the other illustrious musicians are no strangers to this column, Saina is. She’s from the Republic of Sakha (Yakutia) in the immense Siberian region of Russia. Saina began singing in a local pop idiom but then shifted focus to learn songs of Siberian indigenous peoples directly from them, thereby deepening her understanding of her ancestral culture. These musicians have not performed together before, so this concert promises to be full of fresh Northern musical spontaneity.

April 2 again at the Musideum two Toronto groups, The Horables and the Friends of Markos perform “From Freygish to Phrygian, A night of Klezmer and Greek music.” The Friends of Markos brings a rambunctious and unpretentious energy to tunes rendered in the Greek rebetiko style, while The Horables play the self-described “celebratory dance music of Eastern European Jews, as well as Gypsy dance tunes and some Django-style jazz.” Sounds like a fun evening though the dance floor will be tight.

Also on April 2 – and bringing us back to our theme this month of world music discoveries in an educational setting – the University of Toronto Faculty of Music presents their semi-annual “World Music Ensembles Concert” at Walter Hall, Edward Johnson Building. This edition features the African Drumming and Dancing Ensemble directed by Kwasi Dunyo, Mark Duggan’s Latin-American Percussion Ensemble and the Steel Pan Ensemble directed by Joe Cullen. 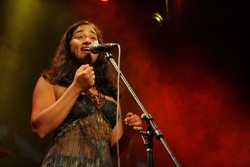