I may not be alone in feeling that this liminal seasonal period bridging late summer and early fall is a time fraught with angst. This season in-between is tinged with regret at the passing of a too-brief and perhaps not-idle-enough summer. All too soon brisk fall days blow responsibility down our necks. The feeling is felt even by those much too old to clearly recall the bittersweet frisson of returning to school the first week of September. 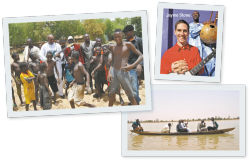 Welcome back to our coverage of world music in The WholeNote. Welcome also to the ever-evolving notions of what performers and concert producers present as world music, to those who contest its very existence and to my current thoughts on such concerts in Southern Ontario neighbourhoods. Add to that list another element integral to the category’s success: its audience reception and fan support. Given, however, that I write here about concerts to come, you’ll have to read about it in The WholeNote blog reviews.

Some writers, dissatisfied with the existing term for the present state of music beyond worldbeat fusions, have offered to tweak, if not entirely to rebrand it. “World Music 2.0” is one such proposed tag. Noise Next Door, a documentary film to be released in 2014, explores the present unease with world music as a marketing term and genre by examining the artists’ music, ideas, influences, the collaboration process and the technology used to “inspire the new world music generation of creators.”

One group that has contested the world music tag as patently Eurocentric (the commercial term’s actual geographic origin), with a distinct tendency to relegate those within the category as “the other,” is the exciting Ottawa-based aboriginal DJ and video “powwow step” group A Tribe Called Red. They will be appearing in The Music Gallery’s “X Avant Festival” in October 2013. I’ll be writing more about them in the next issue.

Information for the next two events arrived too late to be included in our listings: September 6, Jayme Stone, whom The Globe and Mail dubbed “the Yo-Yo Ma of the banjo,” presents a concert supporting his new album at the Music Gallery. Stone is one musician who just may be comfortable with the world music label. The two-time JUNO Award-winning banjoist and composer clearly relishes the global threads which inspire many tracks on his albums. His new CD, for example [reviewed in the current DISCoveries' Editor's Corner], is a sonic travelogue of imaginary geographies traversing what has been called the “cinnamon route through Persia and India,” and Stone elsewhere re-arranges melodies he collected in West Africa. His Music Gallery concert also includes a concerto for banjo and chamber symphony written for him by Andrew Downing, the group’s cellist. Stone’s versatile group is rounded out by top Toronto musicians and by guest vocalist Miranda Mullholland. And on September 28, the Toronto taiko group, Nagata Shachu, drives down the Gardiner Expressway to set the hearts of Hamilton audiences pounding at their concert presented by the Matapa Music and Arts Organization. Their physically demanding music will resound at the Molson Canadian Studio, Hamilton Place.

September 30 at 12:15, Music Mondays presents “From Ragas to Rhythm” performed by Autorickshaw, another Toronto world music fixture, at the Church of the Holy Trinity. The Autorickshaw trio of Dylan Bell, Ed Hanley and Suba Sankaran will be joined by sitarist, guitarist and vocalist Chris Hale, performing arrangements of North and South Indian classical songs plus their special brand of Indo-fusion.

With world music as part of its name, the Small World Music Society has long been the most active presenter of live international-flavoured music concerts in the GTA. In its own words, SWMS gives a “platform to dozens of developing Canadian artists of diverse backgrounds, providing a space for cross-cultural bridge-building, education and understanding.” Small World estimates it has presented roughly 400 events since 1997, an impressive figure by any standard.

In a late August telephone interview Small World executive director and curator Alan Davis enthused about the company’s nascent community presentation space, projected to open next year (more of that later). He was also eager to get the word out about the 12th annual Small World Music Festival. Running from September 26 until October 6 in multiple downtown Toronto venues, this is its signature festival. In his festival press release Davis fingered one problem with the way our city’s vaunted multiculturalism plays out in world music presentations. “Let’s face it” he began, “as we get comfortable in our respective neighbourhoods, most of us need a little help — and perhaps a nudge — to enjoy new aspects of our famed diversity.” Contentment and even complacency with one or two musical genres to the exclusion of all the others is an aspect of human nature familiar to most world music presenters who take on the daunting job of catering to multiple and shifting audiences.

Small World’s gentle nudge to local audiences begins September 26 at the Lula Lounge with a Festival Opening Party. It features Tal National, reputedly the most popular group in Niger, West Africa. Drawing on regional musical genres of highlife, Afrobeat, soukous and “desert blues,” generously infused with transnational rock, they sing in Niger’s main languages of Zarma and Hausa, as well as in French, the colonial language. At home Tal National’s shows last until daybreak; when will their last set wrap at Lula?

Free one-day concert series, September 28: Beginning at 1pm, the festival presents a series of free concerts at Yonge-Dundas Square called “Small World in the Square” lasting the entire day to 11pm. There are seven internationally celebrated acts booked. Unable to do justice to all of them here I’m providing a sketch of a few picks. Headlining is the reggae supergroup Third World marking 40 years on stage, in the studio and on the road. Spreading the message of peace, love and unity through music, these “reggae ambassadors” are the recipients of the 1986 United Nations Peace Medal, two Jamaica Music Industry awards for Best Show Band, and no less than ten Grammy nominations. In 22 albums, Third World proudly combines a veritable catalogue of musical influences including Jamaican reggae of course, but also older rural Jamaican, African roots, American pop, R&B, funk, rap and Euro classical music.

Also taking the stage is the Lahore group Noori (Light) widely considered pioneers of the relatively young Pakistani rock music scene. The band plays a fusion of pop and rock and on occasion colours their songs with traditional South Asian instruments, as in their Season 3 session in the TV show Coke Studio Pakistan (view it on YouTube). While their instruments and musical idiom may be a reflection of the West, their lyrics reflect more homegrown verities. Noori’s songs mirror the dreams and realities of urban Pakistani youth, urging them to change their world for the better and professing women’s empowerment. I’m curious to see their Canadian fans and how they interact with these stars.

Audiences in the square will also be taking a journey down Colombia’s Caribbean coast escorted by Colombian-born composer and guitarist Roberto López and his band. The Montreal-based López takes us on a multi-level musical encounter starting with the inspiration of wind bands of Colombia’s Caribbean coast grooving to the regional rhythms of cumbia, paseo, mapalé, chandé, champeta and porro, interpreted via North-American jazz band instrumentation.

Then “Global Bollywood” gets a local interpretation from Toronto’s Bageshree Vaze and Ensemble. The group celebrates Indian film music arranged for an ensemble of some of Toronto’s finest musicians grounded by the master grooves of Vineet Vyas on tabla. MTV India “rising star” Vaze is a triple threat. She’s not only the vocalist and band leader but also an accomplished kathak dancer, a North Indian dance style closely associated with its traditional music.

My remaining word count allows me a preview of only the closing show of the festival: DakhaBrakha on October 6 at the Revival Bar. The Kyiv-based quartet, whose name means “give and take” in old Ukrainian, has invented a surprising and refreshing stream of world music, infusing their theatrical take on Ukrainian village music with a metal-like rock sensibility. Their core instrumentation of closely miked cello, floor tom, darabuka, djembe and occasional keyboard synth, harmonica and Jew’s harp support the group’s soaring vocal solos and powerful close harmony refrains.

I heard their North American debut at Luminato 2013 where their set was in turns emotionally and powerfully intense and then chilled out, the latter in what sounded like an odd-ball R&B cover. Even those, like me, who don’t understand DakhaBrakha’s Ukrainian lyrics, nevertheless have come alongside their brand of transnational music making. The group tags its style “ethno-chaos,” but whatever the label, the sheer emotional and quirky power embedded in the music marks it as one, however idiosyncratic, map of a way forward for the genre.