If you happened to be in Wilmington, Delaware, in late February of 1976 – or Washington D.C. in early March, or even in Boston through early April that same year – you’d have had the chance to see that rarity in American musical-theatre history: a Richard Rodgers show limping its way to an early death on Broadway. 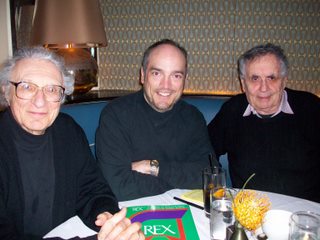 Rex, a musical treatment of Henry VIII and his obsession with siring a male heir, opened at the Lunt-Fontanne Theatre in New York on April 25, 1976, and closed on June 5 after 14 previews and a total of only 49 performances, the shortest run for a Rodgers show in almost 50 years. It is still the only post-1940 Richard Rodgers musical not included in the Rodgers & Hammerstein organization’s performing catalogue.

Hopefully, that might change in the not-too-distant future, following the Civic Light Opera Company’s three-week run of Rex at Fairview Library Theatre this month. It’s another Canadian premiere for the company – the first production of the show anywhere outside the US, for that matter – and the first extended stage run since it closed on Broadway.

It’s a major coup for the CLOC’s Joe Cascone, an admitted Richard Rodgers aficionado. Cascone had known about the show since the time of its original demise, but despite his predilection for staging little-known or “problem” shows, in addition to the standard crowd-pleasers, he’d never given this particular “forgotten op” much thought.

Seeing The Other Boleyn Girl in 2008 sparked Cascone’s interest, however, and he took advantage of his excellent relationship with the R&H organization to ask if there was any possibility of staging Rex. He was warned of the show’s problems – an anti-hero wife-killing leading male role, for starters – but was promised their support if he was seriously interested.

The rights situation had certainly changed in the previous few years. Following the withdrawal of the show in 1976 lyricist Sheldon Harnick (of Fiddler on the Roof fame) and book author Sherman Yellen had frozen the rights, feeling that the show they had originally envisioned with Richard Rodgers had been lost in the constant re-working in the pre-Broadway try-outs, overwhelmed by spectacle and suffocating historical detail.

In 1999, however, New York’s York Theatre asked if they could include Rex in their piano-only, script-in-hand concert performance series, “Musicals in Mufti”; Harnick and Yellen initially said “No,” but then agreed as long as they could be given one year to revise the show. They went back to work, made drastic cuts to the script, tightened the focus, stripped away the pageantry, removed a few songs and reinstated several that had been cut pre-Broadway. The result? A well-received show that allowed the beautiful Richard Rodgers score to be heard more clearly, albeit without a full orchestra.

Harnick and Yellen have clearly retained a strong affection for Rex. Over the years, they have continued to work on the show since 2000, being involved with both the brief but fully-staged production at the University of Findlay in Ohio in April 2002 as part of the Richard Rodgers Centennial celebrations, and another piano-only presentation at the Stages Festival of New Musicals in Chicago in August 2007.

Sheldon Harnick himself called Cascone early in 2009 to let him know they’d agreed to release the rights for CLOC, and Cascone met with Harnick and Yellen twice in New York last year to discuss plans for the show. Sheldon Harnick has re-written the lyrics for one song, Dear Jane, specifically for this production. Both men have promised to come up to see the show – and Sheldon Harnick, now 85, will apparently be in the audience on opening night on Wednesday February 17.

Cascone aims to prove that the show is now well worth doing in its revised form, and hopes that a successful staging may lead R&H to include Rex in their performance rental catalogue, so that a score containing some outstanding Rodgers songs will finally be available for stock and amateur theatre companies everywhere.
How that score will be heard is a story in itself. The Findlay University production apparently featured a 30-piece orchestra, but nobody seems quite sure what instrumental parts they used; all the R&H organization can confirm is that the original parts are now buried in unmarked boxes somewhere in storage. Cascone was originally told that he would have to go with piano only for the music, but has been given permission to add a few instruments so that he can feature his usual five-piece instrumental combo.

Only one song from Rex – the ballad “Away From You” – has achieved any independent life of its own, having been recorded by Sarah Brightman on Andrew Lloyd Webber’s 1989 CD The Songs That Got Away. But the score was the one aspect of the show to garner some praise in 1976, despite its somewhat anachronistic nature.

Rex was the penultimate Richard Rodgers show before his death in 1979, and it’s certainly one worth seeing and hearing. This may well be the only chance you get! The show runs from February 18 to March 6. For ticket information call (416) 755-1717 or go to www.civiclightoperacompany.com.

One other local musical theatre group has a production this month: Scarborough Music Theatre will be presenting Children of Eden at the Scarborough Village Theatre from February 11 to 27.

Music and lyrics for this 1991 show are by Stephen Schwartz, who used to have Godspell and Pippin in brackets after his name, but is now most widely known for writing the smash hit Wicked. Children of Eden, which never made it to Broadway, is based on the Book of Genesis, and deals with family issues in the stories of Adam and Eve, and Noah and the Great Flood. Rarely performed on the professional stage, it remains one of the most popular shows for youth and community groups.

Terry Robins is a musician and musical theatre enthusiast. He can be contacted at: musicaltheatre@thewholenote.com.