The heart of musical theatre in any time period is storytelling through the combination of words and music, where the whole becomes more than the sum of its parts; and when the right creative team and performers come together the results can be uniquely satisfying.

October’s musical theatre season started strongly with Britta Johnson’s Life After at Canadian Stage debuting to rave reviews, sold-out houses and an extended run (so far to October 29). Audiences were bowled over with the sophistication of the music, the humanity and wit of the book, and the potential of many more new musicals to come from such a talent. An unexpectedly welcome addition to the summer and fall was the classic Euripides drama The Bakkhai (in the recent Anne Carson adapation) at the Stratford Festival, in which director Jillian Keiley made the radical and fascinating decision to have the chorus sing rather than speak and chose Vancouver composer Veda Hille (of the recent Onegin and King Arthur) to create their sound, a sultry, disturbing folk-like music. Back in Toronto, Red Sky Performance continued to assert their strength of vision with Adizokan (a collaboration with the Toronto Symphony at Roy Thomson Hall) that will continue with a remounting of Backbone at Canadian Stage Berkeley Street November 2 to 12.

As October ends and November begins there is even more of a wide range of music theatre offerings to choose from. Personally, I have been immersed in rehearsals for Opera Atelier’s production of Mozart’s The Marriage of Figaro (October 26 to November 4 at the Elgin Theatre) which, in Marshall Pynkoski’s exquisitely detailed commedia dell’arte-inspired period staging, pulls those watching as if through a window into the 18th century, where words, music and movement are inextricably intertwined to serve the storytelling, obliterating the fourth wall and delighting in sharing the space with the audience. 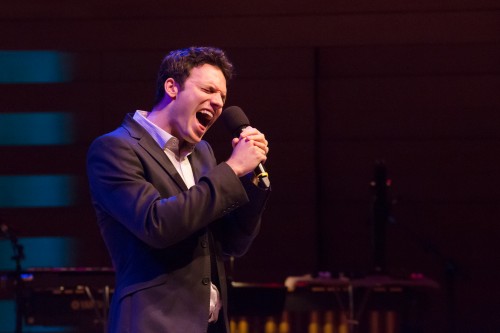 The Musical Stage Company’s Uncovered concert series goes to the root of the storytelling concept, deconstructing and reconstructing the songs of popular singer-songwriters to uncover and share the stories at the heart of the songs. Artistic director Mitchell Marcus works side by side with music director Reza Jacobs and the individual performers, experimenting and exploring the material to create new uniquely theatrical arrangements that clarify and heighten the stories they discover.

Wanting to know more details, I approached Mitchell Marcus about how the series started and his ongoing collaboration with music director Jacobs.

Here is our conversation:

WN:What was your initial impetus or inspiration to create the concert series?

MM: The first Uncovered (in 2007) explored the musical catalogue of The Beatles. We both loved The Beatles and loved musical theatre, and wondered how the songs could be interpreted with a group of singing actors. It turned out to be revelatory as audiences started to hear the stories contained in these iconic songs in a way that they hadn’t previously. The combination of a great actor and an examination of the material from the perspective of character and narrative became something we were fiercely passionate about.

Uncovered seems to have become a cornerstone of your season. Is there a connection between your choice of singer-songwriters to feature with the mainstage show(s) that you are presenting in the season or is there instead (or as well) an arc of experimentation in the choices from year to year? How do you choose which songwriters to feature?

There is no specific connection between the Uncovered concert selections and the mainstage shows, except for the hope of always presenting exciting work of the highest quality. The choice of songwriter is a strange combination of intuition and zeitgeist. Sometimes it’s an artist that one of us loves and has been waiting to tackle. Sometimes it’s a circumstance like the death of David Bowie last year which prioritized Bowie/Queen over Dylan/Springsteen (which we had [already] been debating). I think we also try to ensure that the concert doesn’t stay too stagnant from one year to another, which has frequently resulted in alternating between rock/pop and folk music.

Has the shape of the show or your approach to the material changed since the series began?

When we first started, the concert was thrown together much more quickly, so what was onstage was really the version of the song that the artist wanted to try out. Since then, we spend a lot more time in rehearsal and really try to shape the overall evening into something whole rather than feeling like a cabaret. On the musical side, this has meant a more rigorous dramaturgical process of diving into the lyrics of the songs and making clear decisions around whose story we are telling and what story is being told. This becomes the foundation from which all musical decisions are made and the lyrics of the songwriter serve as our guide. Dramatically, we also started integrating text into the concert to serve as a bridge between numbers. We exclusively use quotes from the songwriters we are featuring and it has been a very effective way to capture their spirit alongside their music.

Could you tell us about your decision to sometimes cast female performers as male singer-songwriters, for example, Maev Beaty as David Bowie last year, and this year, Sara Farb as Bob Dylan?

Ultimately we want to pay tribute to the spirit of the artists and share their words and music with an audience, without – in any way – trying to emulate or impersonate them. As such, the key criteria – whether it’s for delivering text from the songwriter, or singing their songs – is that the artist capture their spirit and intention, both of which transcend gender or age!

There also seems to be a core group of performers who return to take part. Is that just by chance or because they have become part of an Uncovered rep company, so to speak?

Over time we have realized that being a successful Uncovered performer is harder than it looks! Koerner Hall is spectacular, but its acoustics are so good that any imperfections are amplified tenfold. So we need fabulous singers who are also really, really good actors and who collaborate very well in the rehearsal process, since we start with a blank slate and build the arrangements together. We also need a very diverse group of performers so that we can tackle a broad spectrum of songs and styles.

So we try to find the balance between introducing new artists, showcasing returning artists who weren’t in the show the previous year, and bringing back some of the artists from the year prior. Each artist who has ever worked on Uncovered has brought something so unique and special to it. So it’s also a case of just trying to find the group who are interesting as a unit and also right for that particular songwriter.

Do either or both of you find that working regularly on the Uncovered series together has changed the way you work together, or with other collaborators, on other projects?

It has certainly built a very meaningful friendship for the two of us, and a shorthand which I think comes in handy on other shows that we do together. It’s also led to a lot of lessons when it comes to developing our new musicals. Looking at good songwriting from the perspective of narrative arc has come in handy when looking at new musical theatre songs.

Do you see the Uncovered series leading in turn to further experimentation with popular music, perhaps extending to exploring staging – or do you see it staying at the simpler level of song – words and music presented/sung live to the audience with the revelations in the new musical arrangements?

I think Uncovered is meant to stay simple in its concert format, with an emphasis on teasing out stories while just focusing on the words of the songwriter. But I think it has illuminated the power of pop music and so who knows what is possible as we continue to develop new musicals and new musical projects. We wouldn’t want to create a Mamma Mia per se, but I think it’s a very interesting exploration to examine how else pop music can be used to create contemporary and important musical works.

This month there is a wide range of music theatre to choose from. Music is the medium that transforms Shakespeare’s romance of forgiveness The Winter’s Tale into one of the most effective recent story ballets, through the choreography of Christopher Wheeldon combined with the score of Joby Talbot (the same team who brought us the popular Alice in Wonderland ballet). Winter’s Tale returns to the National Ballet of Canada November 10 to 19, only two years after its debut, because of its great initial success.

On the opposite side of the spectrum the record-breaking Canadian Evil Dead the Musical returns to Toronto yet again (to the Randolph Theatre November 9 to 19), proving that a cult classic musical version of a horror movie can have, perhaps, even greater staying power than the movie itself. Tickets are already selling quickly but at the time of writing there is still room in the “Splatter Zone” for the most ardent fans.

Nov 6 to Dec 31:Young People’s Theatre presents a streamlined (85-minute) Beauty and the Beast, giving fans of one of Disney’s best musicals the chance to catch their favourite story live.

Nov 10 to 12/16 to 18: Word has just come in about another new Canadian musical, Riding Off In All Directions . . . . the telling of lies, about the relationship between Mazo de la Roche and Stephen Leacock at Mississauga’s Maja Prentice Theatre. It will be directed by the well-known stage and screen star Colin Fox, who also plays the part of Leacock. The cast includes Bó Bardós as de la Roche; James McLean as Timothy Findley, and Marion Samuel-Stevens as de la Roche’s cousin and lifelong companion, Caroline Clement.

Nov 11 to Dec 3, at Factory Theatre: Trace is a one-man show that follows three generations of mothers and sons from occupied Japan to 21st-century Canada combining virtuoso original piano compositions with lyrical text.

Nov 29 to Dec 1: Also at Hart House Theatre, the now-classic Canadian musical inspired by the old Astaire-Rogers films, The Drowsy Chaperone, arrives in a production by the Victoria College Musical Society.