Anniversaries are great occasions to celebrate success. Fittingly, then, the Stratford Shakespeare Festival presents The Pirates of Penzance, one of Gilbert and Sullivan’s most popular operettas, to help mark its 60th season. The festival has a long tradition of Savoyard successes, beginning with Tyrone Guthrie’s groundbreaking HMS Pinafore in the 1960s. During the 1980s and 1990s, the company’s innovative productions of G&S classics attracted a huge following, especially those directed by Brian MacDonald, the visionary Canadian choreographer who toured his Stratford production of The Mikado to London, New York, and across Canada to showcase the festival’s achievement. “Now once again we’re taking a fresh approach to this beloved repertoire,” says Antoni Cimolino, the festival’s general director, “one that will surely inspire a whole new generation of G&S fans.” Judging by the production that I saw in preview last month, he may be right.

There’s nothing quite like a Gilbert and Sullivan operetta, of which there are 14, all written in the late 19th century for the ambitious producer, Richard D’Oyly Carte who, in 1881, built the Savoy Theatre in London specifically to accommodate their presentation. Although the D’Oyly Carte Opera Company closed in the 1980s, replications of its productions still appear world-wide, as do updated versions that reinterpret the originals to meet the tastes of contemporary audiences. At their core, no matter what style of presentation, all depict a comic view of human folly in nonsensical narratives that use satire, parody, slapstick and exaggeration in the service of an energetic romp. A pre-cursor to musical comedy, the shows rely less on dialogue and more on music to construct characterization and propel plot — scores adroitly composed by Andrew Sullivan to complement the witty librettos of W.S. Gilbert. Talking about Stratford’s Pirates, Franklin Brasz, its musical director, is quick to point out that “those witty lyrics are inextricably tied to memorable melodies.” He adds, “I derive great pleasure from Arthur Sullivan’s wonderfully crafted music: solo arias with gorgeous melody, rich choral writing, deceptively clever rhythmic playfulness … ”

Stratford’s Pirates provides an excellent introduction to the world of G&S by setting the show backstage at the Savoy Theatre where the audience can view the mechanics of staging as well as its effects — the rigging, for example, that facilitates a flying kite, or the moving flats that simulate a roiling sea. Ethan McSweeny, director of the show, and Anna Louizos, the set designer, incorporate concepts from the contemporary “Steampunk” movement into a design inspired by backstage images of Victorian theatre. “I was thrilled to learn more about these retro-futurists,” McSweeny explains of the Steampunks, “[and] their glorious expression of neo-Victoriana through the lens of Jules Verne. I think an important aspect of Steampunk is its effort to render our increasingly invisible and virtual world into ostensible and visible machines.”

The approach works well, allowing for a stage within a stage that deconstructs the technology of theatrical illusion even as it creates moments of high humour and memorable beauty. The ironies of the approach suit the improbable story of Frederic, an upright young man who, as a child, mistakenly is indentured to a band of pirates that later is revealed to be more (or less) than it seems. About to turn 21, Frederic believes he finally has fulfilled his obligations to his criminal comrades, and vows to seek their downfall, only to discover that, through a preposterous technicality, he must remain their ward for 63 more years. Simultaneously, he falls in love with Mabel, the comely daughter of Major-General Stanley. Bound by his sense of duty, he convinces Mabel to wait for him faithfully … until, well, it’s best that you find out what happens for yourself.

McSweeny hews closely to Gilbert’s book and libretto, noting that “I have even gone back to some passages that were in earlier drafts.” Brasz takes more liberties, using new orchestrations (by Michael Starobin) “that are respectful of the core G&S orchestral sound but add new flavours by incorporating Irish whistles, bodhran drum, accordion, mandolin, even banjo.” A few costumed musicians join the actors onstage but, for the most part, the 20-piece orchestra performs from its traditional location under the stage — the orchestra pit. As for the singing, Brasz confesses that “the vocal challenges are, well … operatic. With few book scenes, the cast is singing throughout the show. There is antiphonal chorus writing, layered themes, demanding patter sections (and not just famously for the I Am the Very Model of a Modern Major-General), coloratura, and cadenzas. The vocal forces are massive and demanding but satisfying to perform; and we’ve assembled an extraordinary cast …” 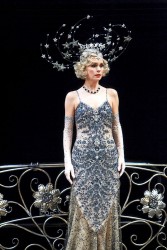 Indeed, Stratford’s The Pirates of Penzance is a crowd-pleaser that deserves all the accolades it is bound to receive — a show “respectful of tradition but absolutely contemporary at the same time,” to quote McSweeny. Something of the same could be said about 42nd Street, the other musical offering that I saw in preview at Stratford last month, albeit for different reasons. There’s a symmetry between the two shows that becomes especially evident when one views them back-to-back, a connection that suggests a possible reason for their being programmed together in an anniversary season. Each depicts theatre from a back-stage perspective that allows the audience to see the process of making a show. Whereas McSweeny chose the approach to help conceptualize his innovative staging of Pirates, Gary Griffin, the director of 42nd Street, had no choice in the matter: the book for the musical begins and ends on-stage.

42nd Street originated as a novel, written by Bradford Ropes in the early 1930s. Better remembered is the 1933 film version that ushered in the career of Ruby Keeler and introduced choreographer Busby Berkeley to the song-writing talents of Harry Warren (composer) and Al Dubin (lyricist). The stage version of the story that premiered on Broadway in 1980 under the direction of choreographer Gower Champion primarily uses the movie as its source, which possibly accounts for the flimsiness of the book by Michael Stewart and Mark Bramble. This quintessential back-stage narrative in which an unknown chorine saves the show on opening night after its leading lady breaks an ankle, has inspired so many imitations that its original impact has been lost to cliché — except for the tap dancing.

“There’s an old saying that when the characters in musical theatre can’t speak any more, they sing; and when they can’t sing any more, they dance.” So writes Gary Griffin in his notes for Stratford’s production of 42nd Street . “There’s a real desperation behind [the characters’] dance; they need to get a job in order to survive.” Indeed, the mood of the Great Depression gives the whole production an ironic, if not bitter, edge. When rehearsing “Pretty Lady,” the show they are about to open, the chorus dresses in various shades of brown. For the show itself, they switch to costumes of black, silver and gold — flashing more lamé and glitter than I would have thought possible outside Las Vegas. Literally dancing on coins in the number We’re in the Money, their tap routines become increasingly frenetic, a performance of urgency in which the sound of synchronized shoes is nerve-wrackingly loud. While the effect highlights the dancers’ polish and precision, it also demystifies the genre: this is an exercise in show business, with tap-dancing its tendentious technology.

Griffin calls 42nd Street a “noisy” musical, one that has “a certain brash energy that befits its subject matter.” Alex Sanchez, choreographer for the show, explains, “Gary and I were also interested in making it a sexier and grittier production, much like the film.” His biggest concern was the floor of the Festival Theatre which “after the show, is taken apart and replaced by the floor for the next production. I didn’t know what to expect as far as the kind of material they used and how the taps would sound. The staff and crew of the Festival … created a great sounding deck aided by floor microphones.”

Microphones also are on view in the orchestra loft that Griffin has integrated into the set design. “I wanted the audience to see and feel the presence of the musicians,” he explains; “it was important to me to put the musicians into the world of the play.” Michael Barber, musical director for the show, agrees with the decision: “I think it adds an excitement to the show not felt when the band is hidden from view. It’s also important because people see the musicians play — it reminds them that there is a live band — and that’s what it takes to make a show sound great.” The orchestrations by Philip Lang, written for the 1980 version, are reminiscent of the 1930s, he suggests, but “reimagined through the lens of 1980s Broadway. The effect is more glamorous and showy than trying to go period …”

For all its glitz and glamour, this production of 42nd Street is memorable more for its dancing than anything else. Peppered with popular standards like Lullaby of Broadway, Shuffle off to Buffalo and the eponymous 42nd Street, the score is as familiar as the narrative is known. What feels contemporary, even as it remains traditional, is the sight and sound of tap dancers filling the Festival Stage … and the reasons for their deployment.