With the COVID-19 pandemic having passed the one-year mark – and with recent ominous developments indicating we’re likely looking at another year of it – and with the university teaching year just finishing, this article will be a kind of retrospective diary of the past annus horribilis from the perspective of a jazz musician and teacher.

In February of 2020, about a month before COVID hit North America, I did a tour of Western Canada with Harrison Squared, a quartet co-led by two young musicians named Harrison – Harrison Argatoff (tenor) and Harrison Vetro (drums), with saxophonist Mike Murley and me aboard as greybeard mentors. The band was born out of a few sporadic gigs, but some chemistry was there and we’d just released a CD called Trout in Swimwear, so the tour was a chance to promote the CD and for the band to coalesce with eight concerts spread over two weeks. The first day was the most gruelling: an eye-wateringly, early-morning flight to Vancouver, renting a van and taking the ferry to Nanaimo, then driving to Courtenay to do our first gig in a club that night, with just hours to spare. That our first gig was in Courtenay was significant for me as it’s become like a second home – my sister-in-law Fran and her son Kyle (like a third son to me along with my own two) live there, and her cousin Frank is just down the street, so I’ve visited many times. However, the tight schedule didn’t allow much time for socializing. 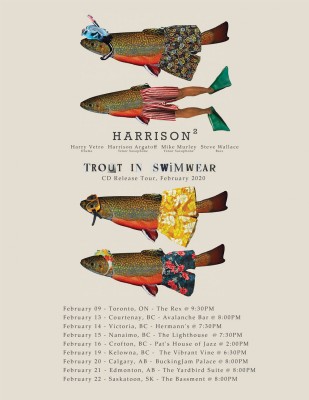 Our first stop was at Fran’s house to pick up the bass and amp I was borrowing. I only had time for the briefest visit with her (she’d been in poor health and wouldn’t be able to come to the gig), and we were leaving the next day. Fran would die just three months later, not from COVID but from just about everything else. How could I have known our rushed visit would be the last time I would ever see her on Earth? Or that the coming plague would make a funeral impossible?

Successful and satisfying as the tour was, retrospect brings a similarly jolting and unforeseen irony. How could I have known that this would be the most – and last – real playing for live audiences I would do for the next 14 months, or that it would represent half of the money I would earn from playing music that year? Murley and I have talked about that tour, looking back in stunned wonder that we got it in just under the wire and how strange it was to go from so much to …. nothing. I’m reminded of comedian Denis Leary’s dark line about Lou Gehrig: “The guy died from Lou Gehrig’s disease. How did he not see that coming?” But of course none of us did, not really. Only hindsight is 20/20 and predicting history is a mug’s game at best.

So This Is How It’s Going to Be

Not long after I got home the pandemic became a reality. I’m not sure what it says about our society, but what made it all hit home for me was the NBA calling off a basketball game just as it was about to start because one of the players tested positive, then suspending the entire season the next day. The other major sports rapidly followed suit and that’s when we knew we were in trouble: when multi-billion dollar industries relying on ticket sales suddenly shut down, it gets your attention. Opera companies closing? Who cares? Theatre seasons cancelled? So what? Jazz clubs shuttered? Please. I’m kidding of course, with some bitterness, but it was professional sports shutting down that signalled we weren’t in Kansas anymore, and wouldn’t be for some time.

The night the NBA suspended that game my wife Anna developed a sudden, severe cough and chest tightness and we both thought, “Uh-oh, she has it.” I was supposed to teach private lessons the next day and wondered about the wisdom of going in because if she had it, I likely did too. But she had no fever or other symptoms and in the end I did teach the next day, a case of “If I knew then what I know now, I never would have done it.” Anna made an appointment with her doctor that day – probably the last day she could have – and in between lessons I got a text from her saying, “Honey, great news! It’s only pneumonia!” surely the only time anyone was ever relieved to have pneumonia.

Laughin’ to Keep from Cryin’

One of the great side benefits of being a jazz musician is that underdog gallows humour becomes second nature: jazz players are used to being marginalized and beating their heads against the wall, so having a mordant sense of humour is a necessary defense. A good example was an early pandemic cartoon showing a pre-lockdown jazz club with six people in the audience and a post-lockdown club with the same six people. COVID Shmovid, bring it on, we’re used to losing. Or a musician friend’s declaration that whoever amongst us had the most cancelled gigs was “the winner.” Or that before COVID, we all had a lot of gig, singular intended.

After the March 16 lockdown, I spent a lot of time doing what I uncomfortably came to realize I’m pretty good at: nothing at all. It was like the reverse of those sports car ads – from 100 to zero m.p.h. in three seconds flat. I came to realize that my closest practical involvement with music would be through teaching and spent a lot of the summer trying to sort out the challenges of what that would look like, without really knowing what changes might lie ahead. And to be sure there were some, mostly a switch from a hybrid of in-person and remote teaching to remote only. It involved some compromise, adaptation and outside-the-box thinking, but given the trying circumstances, I would say the year was successful; my students all made good progress and still learned a lot. Congratulations to my fellow teachers, the support staff and, most of all, the students for their efforts in making it all work.

As for playing? Not so much. In earlier articles I wrote about playing with Mark Eisenman and Mark Micklethwaite and streaming our efforts to a subscribing audience, but that shut down in early November once we entered the second (?) wave. Now that we’re in the third, or ninth, or wherever the hell we are, this won’t resume anytime soon. So my relationship with the bass has been reduced to practising, with mixed success. I end up working on intricate things like playing the melodies to songs in all 12 keys, which is a workout and useful to an extent, but doesn’t really address the nuts and bolts of what I mostly have to do: bang out hard, fat quarter notes till I’m blue in the face. I know I should be practising that but the trouble is it’s too boring without the presence of a drummer to make me bear down. I’ve come to realize that playing the bass, at least playing it the way I do, is like being a shark. Sharks have to swim constantly to live and bassists need to play with people continuously or else they wither. Playing jazz bass alone doesn’t mean much, not even to me.

So, where are we? What do we do? How do we keep faith as this mess goes on longer and seems to be getting worse and worse? Just the other day I received some answers to these questions along with a glimmer of hope from the teaching front.

I was asked to adjudicate the recital of a fourth-year bassist named Ian Afif, whom I know but hadn’t heard play yet. I’ve done this work many times, but this round would be different. No audiences or adjudicators can be present at the recitals; the ensembles livestream their concerts on a YouTube channel; and the performances are archived so they can also be watched later. Being naturally distrustful of digital technology I had my doubts, but while there were reportedly some glitches early on, it was seamless. At the appointed hour the camera went live to show bassist Afif with his quartet of tenor saxophone, piano and drums, the rhythm section in masks and everyone distanced. I felt for them playing in such a vacuum, but it didn’t seem to faze them at all. They began to play Herbie Hancock’s Toys and within seconds the magic spell of live music took over, even with no one physically present. And the spell deepened over the next hour or so, their concentration and interplay and intense listening winning the day – a real band playing music for keeps.

It was a beautiful presentation of a nicely varied program involving thoughtful, interesting and engaging improvisation; perhaps necessarily a little more subdued than usual, but riveting nonetheless. I was stunned and grateful, as this concert made me forget the pandemic for a while. How could I have forgotten that’s what good music is supposed to do? Stopping time and lifting you up. Congratulations to them too.

I’m no Pollyanna, but this concert left me with some answers and real hope. How will musicians get through this? The same as they always do, with commitment and effort and faith and an unquenchable desire to make music, to play, to communicate. Live music is still possible, it just requires a little more ingenuity and patience these days. 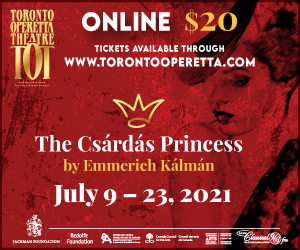