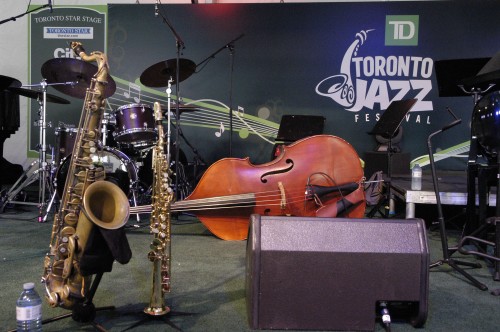 The weather in April and May was so cool, grey and damp it barely felt like spring, yet here I am pondering a column for this summer issue of WholeNote, which covers not only June, but July and August as well. I’ve always found this tricky, as it involves a time warp of looking three months into the future – something I’m ill-suited to at the best of times – and the weather this year has only made it worse. It’s like hugging thin air – what to write about? A preview of the many upcoming festivals, perhaps? Well, yes, but they haven’t happened yet and besides, they’re often covered elsewhere in the issue.

For jazz musicians, summer means not only jazz festival season but often playing in hot and muggy conditions, indoors or out. So, after some head-scratching I’ve decided to write about what it’s like to play in the sticky cauldron of summer. Lest the following litany of complaints seems too petulant or kvetchy, remember they’re mostly meant to be humorous, real though they are.

For starters, there’s what happens to instruments as the weather grows more hot and humid, in particular my instrument, the double bass, which vehemently protests the onset of each summer by becoming almost impossible to play for two or three weeks in late June to early July. It tightens up and the body swells, forcing the action – i.e. the distance of the strings above the fingerboard – to get uncomfortably high. Now, I generally like a high action, but what happens right when the festivals are starting and you’re hoping to be at your best, is just ridiculous. The bass feels like concrete and its sound gets choked, not exactly what you need while having to deal with the enervation of the heat yourself!

Then there’s the stickiness. The fingerboard and neck get all gummy from sweat and the humidity, as do the strings, so you’re constantly wiping them down, which works for about five seconds. All the stickiness leads to greater friction, which leads to – you guessed it – blisters. No matter how much I’ve been playing or how tough my calluses are, I always end up with blisters playing in the summer as the skin gets softer from the humidity. There’s usually one on my right thumb, one or two on the plucking fingers and a couple of small ones on the tips of my left fingers. All this while the action is so stiff it feels like the strings are steel cables. But best of all – pinch me, I’m dreamin’ – is when these blisters break, and sweat, never in short supply on a jazz bandstand, gets into them. It feels roughly like squeezing lemon juice onto a paper cut and brings a whole new meaning to “burning it up.”

The best part about jazz sweat though, is the sting when it runs down into your eyes, rendering them useless for sight-reading purposes. (Luckily, I don’t read music well enough to ruin my playing.) Bassists and drummers often play continuously throughout a piece, so they rarely have a chance to wipe their eyes, making the rivulets of acid off the forehead a constant torture. I’ve had many experiences with this, but the one that stands out came during a performance of Two Bass Hit with Rob McConnell’s Tentet during the Toronto festival years ago. It was late June at The Rex, always a steambath in the summer, but especially so when packed.

Two Bass Hit eventually becomes a very fast blues in D-flat – not a bassist’s favourite key – and our version devolved into a marathon joust between the three saxophonists, P.J. Perry, Alex Dean and Mike Murley, each having their way with the changes and giving the others no quarter. This saxophone combat usually lasted 15 to 20 minutes, with drummer Terry Clarke and me flailing away underneath, playing time at this breakneck tempo. After about a minute there was so much sweat running into my eyes all I could do was shut them tight to keep it out. Eventually there was a break when the band stopped and left all three saxophonists alone in a kind of Coltrane-meets-Dixieland polyphonic wankfest. Terry and I couldn’t wipe ourselves down fast enough but as soon as we resumed playing it was sweat blindness all over again and I remember playing the head out by memory because I couldn’t see my music. There’s a blown-up photograph on the wall at The Rex showing Murley, Dean and me in the middle of this soggy battle, hair soaked and faces beet-red, a testament to a jazz ordeal I won’t ever forget.

Just to show that the trial-by-fire of tropical jazz conditions extends beyond musicians to their audience, on that same night at The Rex, a lady – and a youngish one at that – fainted from the heat, flopping out of her seat onto the floor right in the middle of a tune. I remember the band playing on as the paramedics arrived and carried her out on a stretcher. As they say, the show must go on.

The conditions don’t improve much, if at all, when jazz moves from sweatshop clubs to the other common summer venue – the outdoor stage. It’s a general principle that often what’s good for the paying customer – in this case, enjoying live jazz in the open air with some shade and maybe a beer – is not so good for the performers. And outdoor stages, even when adequately covered, present difficulties. First of all there’s the sound, which dissipates into the open air with nothing to hold it, or bounces back off tall buildings, creating a weird echo-chamber effect. This causes musicians to play harder than they should without getting much back and is often exacerbated by soundmen of the louder-is-better school, who decide to “help you out” by boosting things in the monitors to Thor-like levels. Great, my prayers have been answered, now it sounds thin and deafening.

Beyond sound, there’s odour. As in the venerable jazz tent, which, after a few days of use not only resembles a giant sneaker, but smells like one too – a piquant mixture of sweat, stale beer, mildew, melted plastic and barfed-up popcorn with just a hint of salami underneath. Heavenly.

And for bands using written music, wind is always a useful ally, tossing charts to and fro, or blowing cymbal stands to the ground – “Wow, that drummer is really bringing it today!” There are solutions like clothes pegs or see-through plexi-glass covers to hold sheet music in place, but they never quite do the trick even if you can get them in place. As for turning pages with these gizmos, forget it. And in some jazz version of Murphy’s Law, it’s never a chart you hate that blows away, but one that you actually were looking forward to playing.

But the best part of playing jazz al fresco is the wildlife, as in insects. There’s nothing quite like being in the middle of a ballad and watching several mosquitoes land on your forearm, all damp and juicy, knowing they’re going to bite you and there’s nothing you can do about it. Or flying into your eye and buzzing about your ears while you’re in the middle of a solo. It’s also fun when a fly lands in the middle of a complex passage of 16th notes on your music, lending a whole new meaning to “reading fly shit.” Bees up the ante and have been known to swarm bandstands; being bitten by mosquitoes is one thing but being stung by a bee while playing is the frozen limit, though all in a day’s work in the great jazz outdoors.

Sometimes the wildlife comes in human form, particularly in sweltering tents where beer has been served all day long. I once played in a tent at the Barrie Jazz Festival where the audience had been imbibing for hours and were in something of a Belfast mood. The leader did a little too much talking out front and someone bellowed out “Play some *$#&ing music already!!” So we made with the sounds, but they did not soothe the savage breast. The bird was definitely in the air and I had the distinct feeling that if live produce had been on hand it would have been hurtling toward us with a vengeance. Jazz is not an open-air sport and when I approach playing an outdoor venue I often feel like W.C. Fields – “On the whole, I’d rather be in Philadelphia” – or at least indoors, with a frosty martini and a ballgame on.

So, outdoors or in a sweatbox, the next time you hear some live jazz in the summer and notice the musicians seem a little bedraggled and moist, perhaps a little red in the face or less focused than usual, you’ll understand why and extend them some empathy. Or at least refrain from throwing vegetables at them. After all, they’re not getting danger pay – that’s if they’re getting paid at all. No pun intended, it’s hard to play hot music while you’re melting.

I’d like to leave off by wishing everyone a happy summer of listening to music, and with a favourite joke about the season: How many singers does it take to sing Summertime?

All of them, apparently. 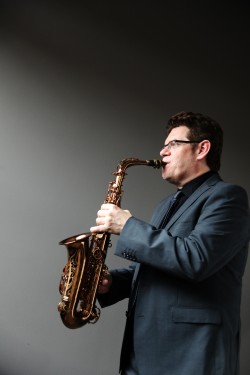