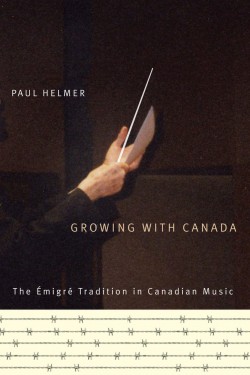 Growing with Canada: The Émigré Tradition in Canadian Music

• Between 1933 and 1948 a number of musicians came to Canada to escape persecution in their homelands. Most were fleeing the Nazis in Europe, but some were escaping the Communists within the constantly changing borders of the Soviet Union. Paul Helmer has identified 121 musicians among the 4000 to 5000 who came to this country seeking refuge during that period. Many, though by no means all, were Jewish. But Helmer’s investigation focuses less on why they escaped than how they got out, and what they achieved after they arrived in Canada.

Most landed in Canada with little more than their talent and whatever contacts they could come up with. None had willingly chosen to abandon their families, homelands, cultures, careers or schools to endure the dangers and humiliations that they endured. But Helmer, who taught musicology for many years at McGill, shows how these émigrés retained some control over their destinies.

The core of Helmer’s book is a series of interviews he did with some thirty of these émigrés or their surviving family members. Though it would be interesting to read these interviews in full, Helmer has put them to good use here, effectively building up a multi-layered picture.

The impact of these émigrés on the Canadian music scene was so profound, Helmer argues, that they managed to overturn the prevailing dominance of English musical culture and introduce their central European values and standards – not just in composition but also in music education and the then-developing field of musicology. Although Helmer himself is a pianist as well as a musicologist, he doesn’t devote as much attention to the influence on performance styles, although he does note how musicians like Greta Kraus and Mario Duschenes pioneered baroque performance practice in Canada. In any case, the result was the beginnings of musical independence, what could be termed a Canadian style, and international prestige.

“Once the émigrés had decided to emigrate to Canada,” writes Helmer, “they faced no real impediments because of race, religion or nationality.” Yet even if we accept Helmer’s controversial conclusion that the Canadian immigration department did as much as it could have to save lives threatened by the Nazis and the Soviets, we feel the loss of the millions who didn’t make it out, and what they would have further contributed to Canadian music.

This is a fascinating, provocative and important book (though it does deserve a more thorough index). Helmer’s celebration of the contributions of these émigrés to Canadian music resonates deeply when he writes, “We can only pay tribute to their accomplishments by continuing to welcome musicians who come to Canada from around the world to contribute to our unique musical tapestry.”