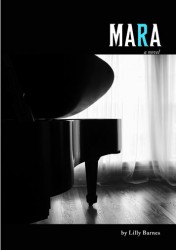 “You are getting some notion what it’s like trying to fit everything I found out about Mara into one single person,” says Ted, the lead voice in Lilly Barnes’ novel about music, madness, racism and survival. “There’s always something goes squishing out the sides.” That something is why Ted is so fascinated with Mara. Mara, whose daughter Michelle, a jazz singer, has just died, has apparently cut off the dead girl’s earlobes. Ted, a jazz pianist, is obsessed with discovering why.

Lilly Barnes, a scriptwriter and documentary-maker for the CBC, uses her keen ear for dialogue to create a cast of vivid personalities to tell her story from various points of view. We hear from Ted, a jazz pianist enlisted to help Mara, Bear, who is Ted’s jazz partner and best friend, Bear’s wife Alicia, Michelle’s former neighbour Lena, and Mara herself, who had been a concert pianist in Europe. Barnes gives each one a distinctively idiosyncratic way of talking.

The story is set in Toronto in 1964, with frequent references to the thriving jazz scene then. By sending Ted off to Europe, Barnes is able to introduce characters  from Mara’s mysterious past and describe what it took for her to survive the Holocaust as a Jew. In fact, the most compelling aspects of this novel relate to Barnes’ own life, since her mother was a Russian concert pianist, Barnes herself was married to the late Canadian composer Milton Barnes, and her sons Micah and Daniel are jazz musicians.

At one point, Lena says, “I love a mystery. It’s where surprises come from.” But, richly layered and moving though this novel is,  surprises are few, since it turns out that things are just as they seemed all along. It’s just that Ted couldn’t see it. But at least in the end Ted, who had been musically blocked, gets his chops back –and more – and the music triumphs.