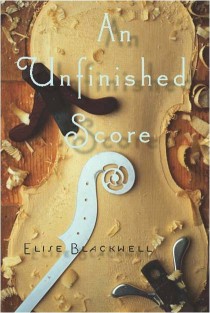 An Unfinished Score
by Elise Blackwell
Unbridled Books
265 pages;
$28.95 US

IN ELISE BLACKWELL’S intriguing new novel, all the main characters are musicians. Many are – or want to be – composers. Around that revolves the suspenseful plot, which deals with betrayal, blackmail, and a most unusual method of revenge.

Suzanne’s lover Alex has been killed in a plane crash. He was a famous conductor, she an accomplished violist. Suzanne is married to Ben, a cellist and composer. They share their house with Suzanne’s best friend Petra, a violinist in Suzanne’s string quartet, as well as Petra’s daughter, Adele, who – and the author makes sure the irony is not lost on us – is deaf.
Alex’s wife Olivia plans an elegant revenge by forcing Suzanne to complete a viola concerto her husband had left behind. Suzanne is such a consummate narcissist that she deceives herself into thinking that “through Alex’s music she will know what happened to her.” But Olivia has other plans, saying, “From now on, when you think of him you will also think of me.”
Ben’s unrelenting dullness gives experimental composers a bad name, and Petra’s glibness and endless supply of viola jokes grow tedious. But Olivia and Suzanne are compelling characters.

Blackwell, who teaches at the University of South Carolina, acknowleges the help of various sources like a masterclass given by Canada’s St. Lawrence Quartet for the musical side of things, such as her descriptions of the workings of Suzanne’s string quartet. She has peppered her story with arcane facts from music history, like the origins of Albinoni’s famous Adagio in G minor, as well as interesting figures like the late British composer Minna Keal (misspelled by Blackwell as Keel). They give the story breadth, steering it away from becoming maudlin by creating a musical context for the world Blackwell’s characters live in. But the confusing mixture of fact and fiction, as in the bizarre episode with violinist Joshua Felder, distracts from the story. In any case, this is a highly enjoyable novel that kept me happily reading until the surprising – and satisfying – end.