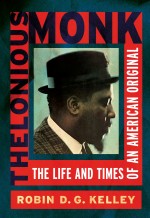 Thelonious Monk: The Life and Times of an American Original

Herbie Nichols was the first to champion Thelonious Monk in print. Monk was two years older than Nichols, and like him, born in San Juan Hill in Manhattan. Robin D.G. Kelley quotes Nichols, who wrote in 1944, “Thelonious Monk is an oddity among piano players. This particular fellow is the author of the weirdest rhythmical melodies I’ve ever heard. They are very great, too.” Monk, of course, went on to become a giant influence in the history of jazz. His compositions like Round Midnight, Blue Monk, Ruby, My Dear and Straight, No Chaser are classics.

Kelley, who teaches history at the University of Southern California, is faced with a life so rich, a personality so complex, a body of recordings so important, and a character so legendary that his book is bursting at the seams with fascinating details about Monk’s life and music.

Kelley managed to gain unprecedented access to family members and their collections of long-forgotten documents. But even Kelley, for all his meticulous research, is unable to fully unravel Monk’s relationship with the intriguing Baroness Pannonica de Koenigswarter, who Kelley calls “the most significant relationship in Monk’s life outside his family.” She took care of Monk – and his wife Nellie – at her home (just as she had provided brief sanctuary for Herbie Nichols in 1961) from 1973, when he had almost given up playing altogether, until his death in 1982.

He portrays an engaging and witty, though moody and difficult, personality. But despite Monk’s success, things were never easy. He had problems with alcohol and drugs. Even more devastating were his episodes of manic depression, which account for some of his bizarre antics both on stage and off. Reading about his stony silences and vacant stares, especially late in his performing career, I now know why the performance I heard in Toronto at the Colonial Tavern in 1972 was so disappointing.

Enhancing our appreciation of the music, Kelley makes a point of underlining the influence of classical music on Monk’s playing and composing. He presents him as both a traditionalist and an innovator. “From the beginning of his musical life,” writes Kelley, “Monk had always epitomized the Janus-faced musician, looking simultaneously at the future and the past.”