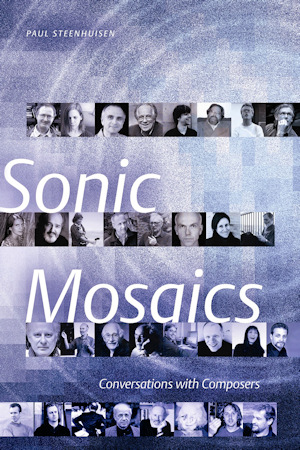 Canadian composer and writer Paul Steenhuisen surveys contemporary Canadian music – and contemporary music in general - by interviewing twenty-six of Canada’s most interesting compos-ers, along with six European and American composers like Pierre Boulez and George Crumb.

Steenhuisen shows an understanding of the work of everyone he interviews, no matter what their musical style. This especially pays off with an experimental composer like John Oswald, whose technique of plunderphonics challenges traditional approaches to composition. Things get lively when he asks Oswald whether his pieces have an expiry date. Steenhuisen’s questions are thought-provoking, and his thorough preparation allows him to follow wherever the subject takes him. A surprising answer can turn things in an entirely different direction.

One of the most engaging aspects of this book is the way Steenhuisen approaches the issues involved in being a Canadian composer, and whether Canadian music has “a certain sound, a unique aesthetic”. John Weinzweig can’t identify what the sound is, but insists that it exists. John Beckwith says, “There is a Canadian repertoire and it goes back further than most people are aware.” But later he says, “Your music doesn’t get played very much if you’re Canadian.” Gary Kulesha goes even further, saying, “At this moment there is no Canadian composer who has a substantial international presence.” Barbara Croall, whose mother is Aboriginal, adds a more positive dimension when she says that her identity as a Canadian lies in the intuitiveness of her creative process.

Almost all the interviews that make up this collection were originally published in WholeNote Magazine. Most of them relate to a particular performance or recording. In some cases, this means that the questions focus so narrowly on a single work that you don’t get a well-rounded picture of the composer’s musical personality, especially with someone as multi-faceted as R. Murray Schafer.

Steenhuisen makes no claims to have interviewed every significant Canadian composer, and, inevitably, a number are absent. But of the thirty-two composers interviewed, just five are women. In a country where women composers have always played a major role, this is a disproportionately small representation. But many things in this important book have been particularly well-considered, from the design, the photos and the cover art, to the discography, annotations, and index (which even has an entry for playfulness). Wynton Marsalis covered the same territory in previous books. But now he is not just describing the ways jazz can touch your soul and stir up your sense of beauty. What he’s saying is that jazz can teach concrete life lessons - to listeners and players alike. It teaches you to recognize your strengths and weaknesses, develop your own unique sound, and learn to work things out with other people. His explanations of what jazz is are as good an I’ve ever read, and his comments on musicians he has known, ‘Lessons from the Masters’, are fascinating. Mostly he is admiring, but, to illustrate his ‘Be true to your dreams, don’t compromise’ mantra, he comes down hard on Miles Davis for selling out towards the end of his career.

Marsalis, a well-known jazz and classical trumpeter, composer, and director of Jazz at Lincoln Center, offers an insider’s perspective, having known and played with almost all the great players of his time. He understands what makes them great. Sometimes he goes too far, writing that “jazz musicians get closer to expressing the actual diversity in the ways of love than any musicians before them.” But we get the idea nonetheless.

Terrific anecdotes illustrate his points. There’s the time, as an overeager kid, he first played for Harry “Sweets” Edison, and Edison said “Man, you just played more notes than I played in my entire career.”

Marsalis is fortunate in his co-author Geoffrey Ward.“One touch of his hand on the piano and the moon entered the room” is a lovely evocation of Ellington’s piano playing. A pithy comment about Dizzy Gillespie, “His playing showcases the importance of intelligence”, says much about this eloquent book as well. The Cello Suites: J. S. Bach, Pablo Casals, and the Search for a Baroque Masterpiece

An encounter with Bach’s solo Cello Suites at a concert in Toronto, a chance conversation in a Montreal café with an elderly cellist who turns out to be a “living breathing link with the past”, the opportunity to study the oldest existing score of the Suites in a Brussels library - all this spurs Eric Siblin to uncover the story behind the Suites.

Siblin never found Bach’s original score. But he did find a copy of the same edition of the Suites that Pablo Casals had discovered in 1890, which had lead the young cellist to perform them together for the first time in their history. “I had stumbled into my own prelude,” writes Siblin.

The former Montreal pop music critic is curious, resourceful and passionate. Even though this is a tale of personal discovery, Siblin knows when to get out of the way. So we get biographies of Bach, and Casals, as well as the performance history of the Suites.

Siblin is a skillful writer. His passion for the music and instinctive grasp of the issues comes through. He has done extensive research, although he gets a few minor things wrong. For example, the Berkeley Symphony, which Kent Nagano conducted for almost thirty years, is hardly an “amateur hippied-out” orchestra. The instrument that Dmitry Badiarov promotes for the sixth suite is the violoncello da spalla, which is held on the shoulder, not the violoncello piccolo, which is in fact held like a cello. He offers a reliable bibliography to back up his research. But, frustratingly, his endnotes are hidden at the back, with nothing in the text to indicate what they are annotating.

Siblin is right that the Cello Suites provide a perfect entrée into the sound world of Bach. He provides a delightful and illuminating journey into that world.