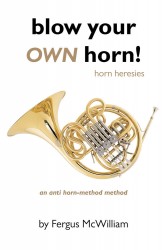 Fergus McWilliam has played French horn with the Berlin Philharmonic for 27 years. It’s a wealth of experience he shares here in what he calls his “anti-horn method.” Right near the beginning he issues a warning, “If you believe that one first needs to acquire sufficient technique before attempting to make music, then this is not for you. Yours is still a flat earth.” The point he continually makes is that technique should not be separated from making music. “It is musical playing which fosters, nourishes and ultimately builds good technique. Musical playing not only requires, but actually encourages and improves technique.” Presumably that’s one of the “horn heresies” he refers to in his title.

But McWilliam is equally impatient with players who call themselves musicians first, hornists (as he refers to French horn players) second. This is not, it turns out, a contradiction of his emphasis on dealing with technical issues within the context of the music — rather, it seems to be a declaration of his passion for the sound of his instrument, “unique and idiosyncratic” as it is. “Which musical instrument,” he asks, “can rival the horn’s sound for sheer sonic impact?” He tells about first falling in love with the sound of the horn as a kid. And so he issues another warning, “We imperil ourselves if we fail to produce a viscerally exciting sound, irrespective of how wonderful our phrasing may be.” To prove the instrument’s “nearly unmatched potential for emotionally expressive power,” he mentions the horn’s single note that opens the final movement of Mahler’s Fifth Symphony.

Though McWilliam was born in Scotland, he grew up in Canada and graduated from the University of Toronto’s music faculty. Canada is where he began his performing and teaching career. In fact, it was McWilliam who arranged for the Canadian Opera Company to obtain its set of Wagner tubas for its Ring cycle. How odd then that the biography of McWilliam in this book mentions nothing about his relationship to Canada — even though it is published in Canada.

Even for those who have no intentions whatsoever of ever trying to play what McWilliam lovingly calls this “famously difficult instrument,” this book is rewarding on many levels. McWilliam offers insights not just into horn-playing, but into all aspects of performing (and by extension, listening to) an instrument. Enough of McWilliam’s engaging personality comes through to make me hope his next will be a memoir.