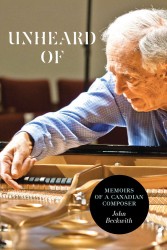 At 85 years of age, Canadian composer John Beckwith can look back from a singular vantage point. Because his life is so intertwined with the development of modern music in Canada, and since he has been so productive in many aspects of it, his memoir has a particularly wide range of material to cover. He describes his early childhood years in Victoria, his complicated first marriage and family life, his experiences as a professor and Dean of the Faculty of Music at the University of Toronto, his years working at the CBC during its heyday, his extensive writings as a music critic, most recently reviewing CDs for this magazine, and, above all, his achievements as the composer of over 150 works.

In describing his most significant works, he offers a revealing glimpse into how he created them. Taking a Stand, which he wrote for the then newly-formed Canadian Brass, shows the spirit of adventure that he brought to a great deal of his music. It’s interesting to see how operas like Crazy to Kill, Night Blooming Cereus and Taptoo! were born out of a deep friendship. Beckwith wrote them with poet James Reaney, whom he describes as “a writer who understood music.” In the case of his Quartet, written for the Orford Quartet, “Ideas came rapidly, as if I had a quartet inside me waiting to be written down.”

Throughout his career, Beckwith’s writings have been marked by his outspokenness — what he himself calls his “habitual critical bitchiness.” But here, though he is uncommonly candid about his own shortcomings and outright failures, he is surprisingly tolerant of the shortcomings of others.

Since Beckwith has already written extensively about figures in Canadian music he knew best, it’s understandable that he is reluctant to cover the same territory again here. He recently contributed a delightful portrait of his teacher John Weinzweig to the collection of essays about Weinzweig he edited with fellow Weinzweig student Brian Cherney. And he has explored his relationship with Glenn Gould extensively, especially in his biography of Alberto Guerrero, who taught both of them piano.

Yet the experiences with friends and colleagues he does recall here — such as the time fellow Canadian composer Barbara Pentland demanded that Beckwith be given a free ticket for a concert which featured one of his compositions — tell so much about the characters and issues involved. These are stories that would otherwise never be heard, and I’d love to hear more.

The extensive endnotes, index, and score excerpts all contribute to the considerable pleasure of reading this beautifully-written memoir. The collection of photos includes a terrific ad from 1968 for the Toronto Symphony Orchestra. It features a photo of a Volkswagon Beetle, and reads, “The bug and John Beckwith.” By the end of this memoir Beckwith is ready to admit that he does, perhaps, exaggerate his obscurity. “Unheard Of”? — hardly. “Unheard” — undoubtedly; though what Canadian composer feels otherwise? “Essential” would be more like it.