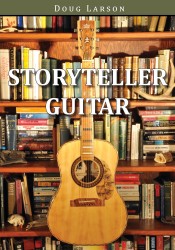 Each one of the 3562 separate pieces that Doug Larson used to make the guitar he discusses here was selected because it told a compelling story. He even went so far as to call his instrument the Storyteller Guitar. Larson is an experienced instrument maker and musician, so he was able to ensure that the sound this guitar produces is worth listening to. But in this chronicle of how he tracked down the materials and built the instrument the music gets sidelined by the direct links to science, art and history that Larson incorporated into its construction.

It contains wood from a door that was retrieved from Guelph’s oldest building, the Priory, before it was torn down, as well as from the remains of a 45-million-year-old giant dawn redwood found in the Canadian High Arctic. There’s an ancient fish fossil, a piece of woolly mammoth’s tusk, about 50,000 years old, and a diamond from the Northwest Territories which Larson estimates “spent 2.5 billion years or so squished like a bug in the Earth’s mantle, then about 65 million years ago … exploded to the surface in a cauldron of crushed rock, gas and ash.” The label was made by Canadian writer Thomas King.

By working so many of his own experiences into the instrument, he has in fact created an idiosyncratic and eloquent autobiography. How many instrument builders would be able — or want–to say, “The joy in using this wood came from having known the tree when it was alive”? But Larson is not just a craftsman and a musician. Now retired from teaching at the University of Guelph, he is a biologist, ecologist, and dendrochronologist (tree ring dater), with his own lab. What’s more, he is a devoted scavenger and an irrepressible hoarder.

Larson also proves to be a powerful writer. Here he uses a more casual style than one might expect from a professor emeritus. But behind every corny pun and folksy sidebar runs his passion for historical artifacts, the physical environment and artistic creation, and his conviction that “art and science have the same goals, require the same discipline and exploit the same creativity. They are not separate.”

Larson’s stories are enlivened by a remarkable cast of characters–mostly scientists, but also foresters, artists, musicians, explorers, businessmen, a former politician and even a convicted crook. In building this instrument and writing about the process, Larson has found an uncommonly creative way of telling his stories, teaching his lessons and enthralling his listeners. Now I’m left wondering what Storyteller sounds like when actually played.