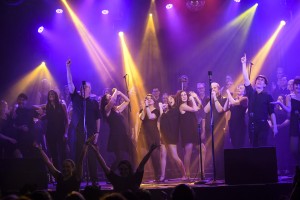 SoundCrowd (www.soundcrowd.ca), Toronto’s first large-scale a cappella ensemble, is the brainchild of artistic director Scott Pietrangelo. The group made its concert debut in 2016 alongside former Barenaked Ladies front-man Steven Page at Toronto’s Danforth Music Hall. Since then, it has been featured guests on a national TV show (The Social), created viral music videos, appeared together with other notable Toronto-based a cappella groups (Cadence, Countermeasure, Retrocity), sang backup for Jonathan Antoine (Britain's Got Talent), opened for Disney's a cappella sensation DCappella, and performed at Carnegie Hall with choirs from around the world under the direction of Deke Sharon (Pitch Perfect, The Sing Off). SoundCrowd is releasing its debut album, All Voice No Limits on June 13, 2020.